Published on the website of the President of Russia, November 26, 2016

Vladimir Putin sent a message of condolences to Raul Castro, President of the Council of State and the Council of Ministers of Cuba, in connection with the death of Fidel Castro, the leader of the Cuban revolution. The Russian President’s message reads, in part: 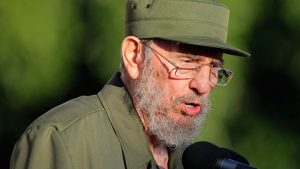 I offer my deepest condolences to you and the entire Cuban nation over the death of your brother, the leader of the Cuban revolution Fidel Castro.

The name of this remarkable statesman is rightfully viewed as a symbol of a whole era in modern history. Free and independent Cuba built by him and his fellow revolutionaries has become an influential member of the international community and serves as an inspiring example for many countries and peoples.

Fidel Castro was a sincere and reliable friend of Russia. He made a tremendous personal contribution to the establishment and progress of Russian-Cuban relations, close strategic partnership in all areas.

This strong and wise man always looked into the future with confidence. He embodied the high ideals of a politician, citizen and patriot who wholeheartedly believed in the cause, to which he devoted his life. Russians will always cherish his memory in their hearts.

In this mournful hour, I ask you to pass on my words of sympathy and support to all members of your family. I wish you courage and tenacity as you face this irreparable loss.

Related readings:
Remembering Fidel Castro, the Cuban revolutionary who left a mark on history, by Mahir Ali, The Wire, Nov 26, 2016