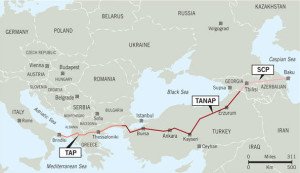 Sources say both sides agreed to speed up the approval process for each project bringing Greece’s proposal to become an energy hub, with increased imports and redistribution of Azeri gas, one step closer to reality. The U.S. diplomat also arranged a meeting between Skourletis and Amos Hochstein, Special Envoy and Coordinator for International Energy Affairs leading the Bureau of Energy Resources (ENR) at the U.S. Department of State.

Hochstein is known for spending considerable amounts of time meeting policy makers in Southeast Europe and promoting U.S. energy interests from a national security perspective, which is clearly a geopolitical concern and not one influenced by market forces or business logic. 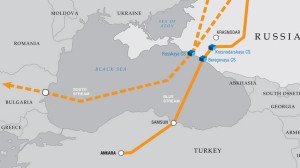 From this perspective, the upcoming visit to Athens all but guarantees a new round of discussions between the Americans and Greeks. At a May meeting with former Greek Energy Minister Panagiotis Lafazanis, Hochstein publicly disapproved of the proposed Turkish Stream and the envisaged Greek stream offshoot, which would deliver Gazprom’s commodity via the Southern Balkans.

He also said the Southern Corridor projects (TANAP & TAP) were realistic while Turkish Stream was not. Sources suggest the State Department is worried about continuous delays to the IGB project, the result of slow decision-making processes in Greece and Bulgaria. Additionally, the American side is also interested in achieving greater understanding of Greece’s energy relations, especially with Moscow. 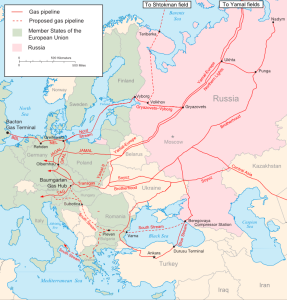 Existing and proposed Russian gas pipelines to Europe. ‘Blue Stream’ opened in 2003 with a capacity of 16 billion m3 per year. Planned Turkish Stream capacity is 63 m3 per year.

Nonetheless, the Vedomosti newspaper reported that Greece, FYROM, Serbia, and Hungary are on the verge of signing a joint memorandum of cooperation on Turkish Stream and its Balkan route. Serbian media have already named part of the route as the “Tesla Pipeline” in an obvious attempt to “nationalize” the section that will pass through Serbia.

Insiders suggest the Greek, Serbian, and Hungarian foreign ministers will meet in Belgrade in September to announce an agreement that will see the exact route formalized. It should be noted the foreign ministers, not energy ministers, have taken the lead on this file. This is especially relevant to Greece where a schism exists between Skourletis and Foreign Minister Nikos Kotzias in terms of which project should be favoured more.

Kiril Domuschiev, head of the Confederation of Employers and Industrialists in Bulgaria, noted that pipework for South Stream could also be used for Turkish Stream or any other project involving both Bulgaria and Gazprom. He added that no one would stop Bulgaria from doing business with Russia.

All in all, a new round of diplomatic bras de fer commences in the Balkans between the U.S. and Russia whilst the real players, the consumers in major EU markets, eagerly await the completion of their own projects.

‘… The key question is whether the Turkish Stream will be a competitor for the Trans-Anatolian or Trans-Adriatic Pipelines, which envisage the delivery of 16 bcm of Azerbaijani gas to Turkey and Europe by 2018 and 2020 respectively.’

The Trans-Adriatic Pipeline and the Turkish Stream pipeline are poised to repeat the same mistakes of their more famous predecessors – the Nabucco and South Stream pipelines. Both raise more questions than answers and are tools of foreign policies for different states rather than real objectives. This only increases the chances that both projects may one day be described as “virtual pipelines”. Southeast European countries however do not have to be losers in this game because these pipelines are not about gas, but politics…

Nabucco was replaced by the TAP, whereas South Stream by Turkish Stream – a new initiative which foresees gas deliveries to Europe via Turkey. In reality, however, everything is at exactly the same point as it was a decade ago. Once again, we are witnessing the competition between two virtual pipelines, which may (or may not) materialise, but which will heavily impact not only the energy discourse in Europe, but also the political dynamics, especially in Central, Eastern and South Eastern Europe…