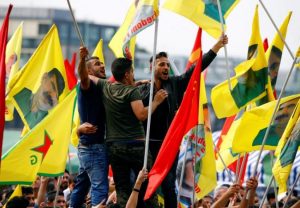 Several tens of thousands rally in Cologne, Germany on Sept 3, 2016 to condemn Turkish gov’t repression against Kurds and others (Wolfgang Rattay, Reuters)

About 25,000 Kurdish supporters demonstrated peacefully in Cologne on Saturday against Turkish President Tayyip Erdogan, chanting in German, “neither military coup nor civilian dictatorship.”

Many demonstrators carried posters portraying Abdullah Ocalan, the jailed leader of the militant Kurdistan Workers Party (PKK), which is listed as a terrorist group by the European Union and the United States, and is banned in Germany.

Ocalan, who has been held in prison by Turkey since 1999, has not been heard from since the failed July 15 coup. A group of Kurdish politicians and activists in Turkey have said they will start a hunger strike next week to demand the right to visit Ocalan, who has been kept in isolation since peace talks between the PKK and the government collapsed last year. 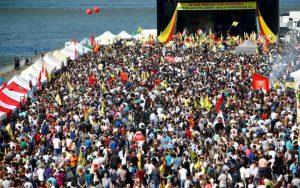 Several tens of thousands rally in Cologne, Germany on Sept 3, 2016 to condemn Turkish gov’t repression against Kurds and others (Wolfgang Rattay, Reuters)

“We are demonstrating because we have been treated unfairly for 30 years, but also because Germany is supporting that behavior through weapons shipments and bans on Kurdish groups in Germany,” said Yavuz Fersoglu, spokesman for Nav-Dem, the Kurdish group that organized the demonstration in Cologne.

German officials are concerned about deepening divisions following the failed putsch among the 3 million people with a Turkish background in Germany.

A police spokeswoman said 1,000 police officers on site kept the demonstration largely peaceful, although many banned PKK flags and banners were confiscated. Police also had to shut a nearby bridge during the event to investigate a possible backpack bomb, but later determined it was a false alarm.

Police had detained 77 people on Friday in the nearby town of Grevenbroich after Kurdish students refused to disperse after a sit-in. Three police officers were injured, police said.

The Verfassungsschutz domestic intelligence agency estimates the PKK has about 14,000 members in Germany. The agency in June said that it could not rule out a return by the PKK to militant forms of action in Europe given escalating violence in Turkey. nI7N1AE00A]

Organizers negotiated with police to stage the Cologne demonstration after city officials canceled a Kurdish festival that had been scheduled for a stadium with a capacity of 50,000, fearing it could engender counter-demonstrations and violence.

The event followed a demonstration by about 20,000 Erdogan supporters at the same site on July 31.

Ankara had reacted angrily after Germany’s top court prevented Erdogan from addressing the crowd via teleconference. The Kurdish event was also banned from live-streaming any speakers.

“When our German government with Angela Merkel supports the Turkish government, we have to at least send a signal to show that she is supporting a dictatorship,” said Selim Cebba, a young Kurdish German at the event, told Reuters.