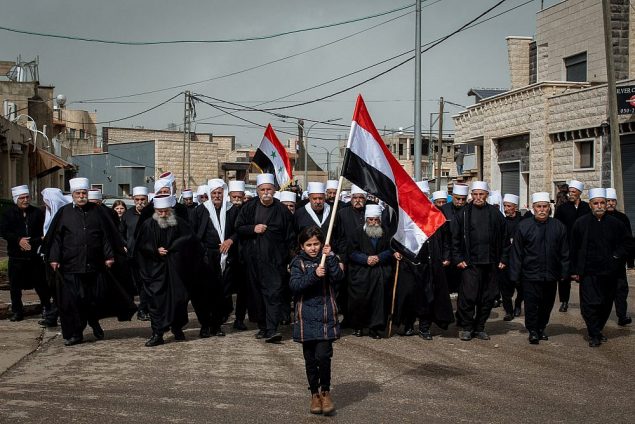 An Israeli wind farm slated for construction on Syrian Druze agricultural land in the occupied Golan Heights has been met with profound resistance from residents.

On Thursday last week, the Israeli government approved plans for a commercial wind farm that would see at least 25 turbines built in the occupied Golan Heights. The decision came less than a week after thousands of Golan Heights residents protested the project in Majdal Shams.

In response, a popular committee representing Majdal Shams, Mas’ade, Ein Qinyye, and Buq’ata — the four Syrian-Druze communities in the Golan Heights — announced it would exhaust “all available means” to resist the project, beginning with a general strike on Sunday.

The protest is not against green energy, which residents told +972 Magazine they fully support. Rather, the objections are arising in the context of a long history of division between Israeli policies in the Golan Heights, which Israel has occupied since the 1967 Six-Day War, and an enduring local resistance to “Israelization.”

Energix, the Israeli green energy firm developing the project, welcomed the government’s approval and said it is working on fulfilling final requirements for construction of the wind farm outside Majdal Shams.

Energix’s website describes its facilities as “established in cooperation with the local communities and empowering minorities,” mentioning the “Druze community” in the “north of the country.”

The website does not detail how Energix, through its subsidiary Clean Wind Energy Project, signed lease agreements with roughly 40 individual landowners who agreed to host the turbines in exchange for several thousand shekels each month. The company had not responded to a request for comment by the time of publication.

Residents who did not sign contracts — almost everyone — raised concerns that 200 meter-high turbines planted amongst the apple, cherry, and almond orchards would affect anyone with land in proximity.

Those who spoke to +972 Magazine explained that their agricultural lands are more than just a source of income.

Majdal Shams-based veterinarian Hassan Safadi says he “chose to raise his children in the Golan Heights instead of Ohio or San Francisco” because he wanted them to grow up “surrounded by lands that ensured the survival of their ancestors and knowing the strength of this community.”

“Many have tried to invade us and control our lands, and a lot of people gave their lives for me to be where I am right now. It’s my job to keep it as livable as I can for my kids,” Hassan says.

Most of the landowners have requested to withdraw from agreements with the Clean Energy Wind Project (Energix), saying they were not informed of the project’s full implications before signing contracts. 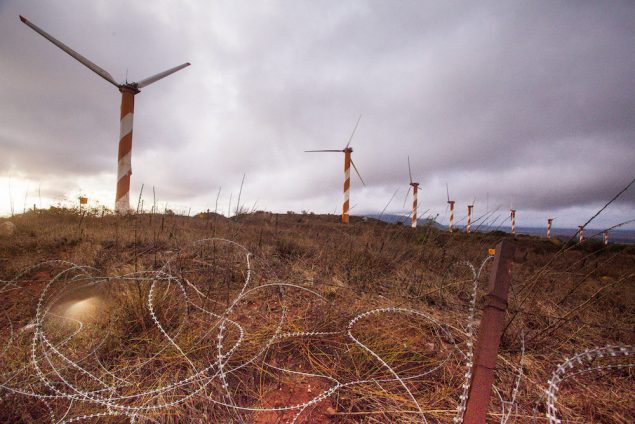 In addition to procedural concerns, planning rights group Bimkom says it argued the wind farm project would cause “disproportionate damage to the unique social agricultural fabric that can be defined as a human cultural heritage.”

The objection included expert testimony on the health problems caused by large-scale turbine construction, specifically the infrared radiation and high noise levels that put people living in the vicinity at risk. The rights groups’ objection included a petition signed by some 6,000 residents of the Syrian-Druze localities and was supported by hundreds of separate objections from farmers and religious leaders.

The few landowners who want the project to go forward are facing immense pressure from their community, including a boycott declared by Druze religious leaders against all dealings with Energix and its subsidiary.

“A religious boycott is a big deal here, even though most people are secular,” says a young activist from Majdal Shams, asking not to be named. “But this movement represents all of us — religious, non-religious, young, old, Israeli citizens, Syrian loyalists, farmers, artists, doctors, students, teachers, and everyone else.”

Another young activist says the “greedy farmers” supporting turbine construction on their land “want the extra monthly income even though they are already rich.”

Al-Marsad was notified in June last year that Energix had filed a lawsuit against their organization, alleging its work violates the national boycott law and that its investigation into the project’s legality was slanderous.

The lawsuit came after Al-Marsad had published more than a year’s worth of research on Energix’s proposed wind farm based on testimony from experts, locals, company representatives.

The Energix lawsuit has made their work much harder, according to Al-Marsad co-founder Wael Tarabieh. The organization has had to hire lawyers who specialize in defamation and ask for financial support in order to pay for their new representation, he says. Nonetheless, Al-Marsad is holding firm. 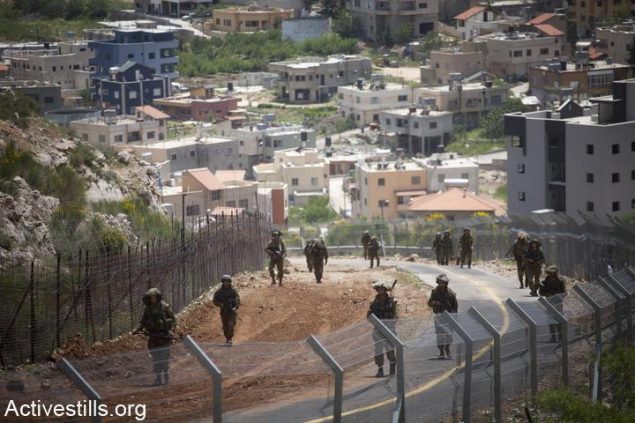 Israeli soldiers patrol the barrier fence of the Israeli-annexed Golan Heights and Syria near Majdal al-Shams, May 20, 2011. (Oren Ziv/Activestills.org)

In defense of his community’s right to protest the project, Tarabieh explains: “It helps us to crystalize our self-definition, the way we see our life, and how we will do things in the future.”

‘We are an “undefined people” in the eyes of the world’

Tarabieh was among many who told +972 Magazine that residents of Majdal Shams — the largest of the Syrian-Druze towns in the Golan Heights — regularly participate in non-violent resistance because it is viewed as the only option in the face of a much stronger occupying power.

Majdal Shams is famous for its so-called Shouting Hill, a spot on the ceasefire line between Syria and Israel where acoustics allowed separated relatives to communicate across the divide before the age of cellphones and video calls.

While technology has apparently made this communication easier, the situation in Syria remains deeply emotional for those on the Israeli side of the militarized border.

“If you have a friend or someone you know in Syria, and their profile deactivates without warning, most of us do our best not to think about it,” said a resident of Mas’ade who asked not to be named both for her own safety and that of her relatives in Syria. “For me, I know there is nothing I can do from here.”

A shrinking number of people in Golan Heights hope to one day be part of Syria again, in the unlikely event that Israel returns the territory or, even less likely, they are liberated by their native country.

Still, some young people feel little connection to Syria and cannot see themselves ever living there. For them, it is all about the future under the current status quo. While more and more of their peers are accepting Israeli citizenship, many people in their teens and 20s say their relationship with Israel is just as complicated, not least due to their sympathy for the people living under Israel’s more well-known military occupation over the West Bank and Gaza.

“I can’t be Israeli so long as the Palestinians are also an occupied people,” one activist, who brought a small Palestinian flag to last Friday’s protest, says.

For the estimated 85 percent of Syrian Druze in the Golan Heights who still refuse Israeli citizenship, their primary form of identification is a laissez-passer, which lists their nationality as “undefined.”

“We are an ‘undefined’ people in the eyes of the world,” says Ali, a 22-year-old Majdal native studying architecture in Tel Aviv.

Sitting at the popular Why? Restaurant Café, one of a handful of trendy bars to open in Majdal Shams in recent years, Ali and his friends explain how they define themselves.

“We are Golan Heights people,” Ali says. “In Arabic, Jawlaniyeen. In the local dialect, Golaniyeen.”

The Israeli media tends to efface these complexities. It assumes either homogeneity or dichotomy in the identity of Syrian Druze residents of the Golan Heights, which doesn’t reflect their lived experience. The Israeli narrative separates members of the Druze faith from other Arabic-speaking peoples, whereas those who spoke with +972 Magazine variously identified themselves as Arab Syrian, Syrian Druze, Syrian Arab, Arab Druze, Druze, Golan Heights people, and more.

“We are required to keep all politics out of the classroom,” a teacher from Majdal Shams who attended last week’s protest tells +972. “But the Israeli curriculum ignores our struggle. They want to teach kids in the Golan Heights that they are Druze, not Arab. But, I can tell you, while most of our kids are Druze by religion, they will say they are Arab or Syrian first.”

‘All we have is the land, and each other’

Many people in Majdal Shams — particularly those old enough to remember the events that followed Israel’s annexation of the territory in 1981 — have had to get used to feeling alone in their struggle. 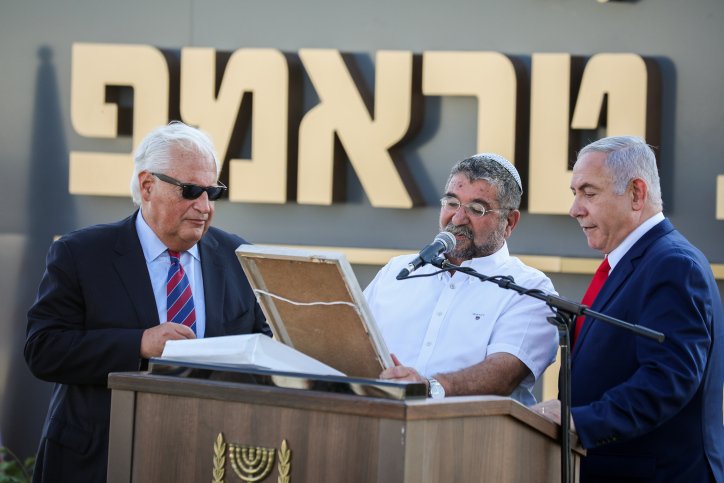 US Ambassador to Israel David Friedman and Prime Minister Benjamin Netanyahu at a laying of a cornerstone ceremony for a new town named after US President Donald Trump, in Kela Alon in the northwestern Golan, on June 16, 2019. Photo by David Cohen/Flash90

Several protesters, who told +972 Magazine they lived in the Golan Heights before Israeli occupation, said that their community’s protest against the Energix wind farm project reminded them of the popular uprising of 1982, when almost all 10,000 residents refused ID cards brought to them by hundreds of Israeli troops. After six months of striking under military blockade, the residents succeeded, though they have remained isolated in their resistance ever since.

This isolation was magnified after the U.S. recognized Israeli sovereignty over the Golan Heights last year. Now, residents fear that the world is forgetting about them — or, worse still, that they have simply stopped caring.

Despite this reality, there is still a common thread of hope among people who, in the past, were unwilling to stand together due to political and personal differences. This unification makes the decision of the Israeli government more heartbreaking.

“So many of the adults were crying at the protest,” Majdal Shams resident Yasser Khanger says. “They told me that when they see these young people with so much energy… now we can feel these fields will not go Energix.”

Khanger, who spent over seven years in an Israeli prison after being arrested in 1997 for security-related offenses, is a poet and Assyriologist with a deep commitment to empowering young people. Many of the signs displayed at the protest included an excerpt of a poem he posted on Facebook the night before the protest:

Because the soil is my body, the grass is my hair.
Because trees are my eyelashes, river my blood.
Because soldiers killed my grandfather guarding the field.
And because I want my daughter to be among the apple trees the day I die.

In 2011, when hundreds of Palestinians in Syria tried to cross the border on Naksa Day (“the setback,” the anniversary of the Six-Day War), Khanger was charged with aggravated assault for throwing rocks at Israeli soldiers and sentenced to another year in prison.

Naturally, the accounts of what happened that day differ depending on who one asks. The Israeli Defense Forces (IDF) and other law enforcement said at the time there was no way to confirm Syrian estimates that 23 Palestinians were killed and hundreds injured by IDF fire.

At the time, an IDF spokeswoman told the Jerusalem Post that they knew of 12 injuries caused when shots were fired at the “lower bodies” of demonstrators as they attempted to cross the fence.

Whatever the truth might be, multiple people in Majdal Shams say that hundreds watched the events unfold. For some, it was a traumatic experience and the first time they saw anyone being killed.

After that incident, Khanger was asked in an interview what people should make of a poet throwing stones, when poets are usually against violence.

“All we have is the land, and of course each other,” Khanger says. “No one wants to fight, but some people have said the turbines will only be built over their dead bodies.”

Ellie Stern is a journalist and activist based in Jaffa.