ANKARA — Dozens of Kurdish and Turkish activists came together silently in Ankara May 20 to discuss efforts to revive the Kurdish settlement process, which collapsed into bloodshed two years ago. The gathering — held without much publicity in the highly charged political climate that prevails in Turkey today — was part of a fledgling civic initiative that seeks to strengthen Turkish-Kurdish dialogue on the grassroots level and encourage skeptic Turks to see the Kurdish problem beyond the violence of the outlawed Kurdistan Workers Party (PKK). 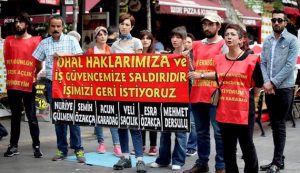 Political rights protest in Ankara, Turkey on May 3, 2017; in photo are two teachers on hunger strike (photo from Facebook)

The initiative comes amid recent reports that Ankara might consider jumpstarting the settlement effort, but this time without the PKK — which both Turkey and much of the international community consider a terrorist organization.

After peace negotiations ended in tatters in July 2015, Ankara launched a ferocious crackdown on urban PKK militants holed up behind trenches and barricades in residential neighborhoods in the Kurdish-majority southeast, leaving urban areas in ruins and thousands of civilians displaced. On the political front, hundreds of members of the Peoples’ Democratic Party (HDP), including both of its co-chairs, landed behind bars on charges of collaborating with the PKK, while dozens of Kurdish-run local administrations were handed over to government-appointed trustees.

In such a gloomy atmosphere, reviving peace initiatives seems an uphill task, but the activists in Ankara are convinced that Turks and Kurds have no other option but to pick up the pieces and resolve their problems through dialogue.

Spearheading the “Social Peace Network” initiative is the Tigris Social Research Center (DITAM), a think tank based in Diyarbakir, the largest city in the mainly Kurdish southeast. The first leg of the initiative involved meetings between various nongovernmental organizations (NGOs) in the region, while the Ankara meeting marked the second leg, which aims to expand the network into the rest of the country.

The gathering that Al-Monitor attended brought together diverse participants, among them prominent intellectuals and longtime activists on the Kurdish issue, but also Kurds close to the ruling Justice and Development Party (AKP) and Turks with no particular sympathy for the Kurdish cause. Their views were equally diverse. Some suggested that Ankara should drop the terrorism rhetoric against the PKK; others argued that the PKK seemed “as eager on war as the AKP.”

“What I’ve seen throughout my existence is that [the majority of ordinary Turks] never saw the Kurdish problem as a problem of human rights violations. Rather, the Kurdish problem became a terrorism problem,” one participant grumbled. “I don’t think the government will move forward on a settlement unless it has some really big interest. What we need to do as NGOs is to insist that the settlement process is the only solution.”

Other participants also underscored the need to reach out to both Turks and Kurds to dispel mutual misgivings and explain what “peace” would actually mean.

Mehmet Emin Ekmen, a former Kurdish lawmaker for the AKP, argued that pro-Kurdish activists tended to focus on the government’s military crackdown, disregarding the PKK’s own violence. Referring to the PKK’s increased regional involvement, he said, “The [failed] process might have had a lot of shortcomings, but the PKK’s intricate ties with Damascus, Moscow and Tehran also contributed to the point we’ve come to today.” A new effort at settlement, he stressed, should involve a “third eye” — or a monitoring party — to deal with disarming the PKK.

Prominent sociologist and writer Ismail Besikci, an ethnic Turk who has served several jail terms for his dissident work on the Kurdish issue, criticized the PKK for entrenching militants in urban neighborhoods, which took the clashes to residential areas. “It is very important for Kurds in this period to secure popular support from the west [of Turkey]. Western Turkey would not support fighting in the trenches, but if the Kurds face oppression because of their mother tongue or because of their Kurdishness in general, it would lend them support,” he said.

Speaking to Al-Monitor later, Besikci underscored that the Kurdish struggle should be waged on the political field. The HDP’s election breakthrough in June 2015, when the party won 80 seats to become the third-largest force in parliament, should have pushed the guerrilla struggle to the back burner, he said, adding, “The struggle would have been much more successful in this way, and destruction would have been avoided.”

DITAM president Mehmet Kaya remained hopeful, even though pessimists seemed to prevail at the gathering. In remarks to Al-Monitor, he observed that civic groups of diverse leanings — Kurdish, pro-AKP, Kemalist and neo-nationalist — “all agree that the problem cannot be resolved through fighting or security-centered solutions.”

“This is a very important resistance point,” he said, adding that the next goal would be to win over influential civic groups, which see the Kurdish issue only as a problem of terrorism.

The Turkish bureaucracy’s hostility toward Kurds was another heated topic at the gathering. Although some participants disagreed with such a notion, recent developments in the southeast speak to the contrary. One of the first things the government-appointed municipal trustees did in Diyarbakir was to dismantle a monument dedicated to the 34 Kurdish civilians who were mistakenly bombed to death in December 2011, a tragedy of collective mourning for the Kurds.

And while the meeting in Ankara was underway, municipal trustees in the province of Van changed the name of a park that had been named after much-respected Kurdish human rights lawyer Tahir Elci, whose murder in 2015 had also shaken the Kurdish community.

Those two incidents alone demonstrate how tough the road to peace is. But it is not impossible. All participants were convinced that Turks and Kurds would ultimately find a middle ground, despite all difficulties.

Anyone who dares protest Erdogan is branded a dangerous terrorist and subjected to cruel and unusual punishment, even elderly mothers

Nuriye Gülmen and Semih Özakça, two educators who went on a hunger strike after they were fired by government decrees in the aftermath of a July 15 coup attempt in Turkey and were arrested on May 23, will end their hunger strike if the government promises to reinstate all civil servants who have been purged, according to a Republican People’s Party (CHP) deputy…

As part of a witch-hunt targeting people linked to the faith-based Gülen movement, 154,694 individuals have been detained and 50,136 have been jailed since a failed coup attempt on July 15 in Turkey, the state-run Anadolu news agency reported on Sunday…