Chrystia Freeland’s family lie grows bigger: Michael Chomiak volunteered for Hitler before German invasion of Ukraine and was hunted by Polish police until the 1980s

MOSCOW – German military records have been found in a Polish government archive in Warsaw revealing that Michael Chomiak, maternal grandfather of Canadian Foreign Minister Chrystia Freeland, volunteered to serve in the German invasion of Poland long before the German Army attacked the Soviet Union and invaded Ukraine. 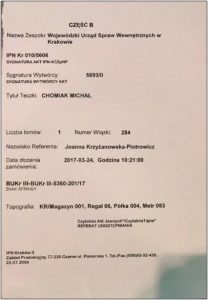 Chomiak’s records show he was trained in Vienna for German espionage and propaganda operations, then promoted to run the German press machine for the Galician region of Ukraine and Poland during the four-year German occupation. So high-ranking and active in the Nazi cause was Chomiak that the Polish intelligence services were actively hunting for him until the 1980s – without knowing he had fled for safety to an Alberta farm in Canada.

The newly disclosed documents expose Freeland’s repeated lying that Chomiak had been a victim of World War II, an unwilling journalist overpowered by German military force  compelled to write propaganda extolling the German Army’s successes and advocating the destruction of the Jews, Poles and Russians.

As for Freeland’s claim that Chomiak had secretly aided the Ukrainian resistance, sources in Warsaw believe Chomiak was trained by the Germans as a double-agent, penetrating Ukrainian groups and spying on them.

The Polish records also point to the likelihood that U.S. Army, U.S. intelligence and Canadian immigration records on Chomiak – concealed until now – can confirm in greater detail what Chomiak did during the war, as well as for years afterward, which made him a target for the Polish police until not long before his death in 1984.

Following her promotion to foreign minister in January of this year, Freeland repeated the lies after historians and reporters opened Chomiak’s personal papers at the Alberta province archives. The Chomiak papers can be found at accession number 85.191 (click to open)…

In Warsaw, a file on Chomiak has been discovered at the Institute of National Remembrance (IPN is the Polish acronym), which is part of the state’s Commission for the Prosecution of Crimes against the Polish Nation. There are four items in the file, which have been photographed,  and are published here for the first time. The IPN has tagged the Chomiak file No. Kr 010/5606…

Read the full article, with extensive photos and document facsimiles, at the original weblink above.

To say Canada’s ‘star diplomat’, Chyrstia Freeland, has skeletons in her closet, is a grave understatement. The country’s foreign affairs minister had a Nazi collaborator as grandfather — a fact she knew for decades but which didn’t stop her from peddling her way to a top government post.

As the revelation came to light this week, Freeland has dismissed the facts as part of a “Russian disinformation campaign”, raising questions among some about the prospects for Canada’s role in Ukraine. On March 6, Canada extended its military training mission to the Eastern European nation, supporting a government that has ties to extreme, far-right nationalist elements and anti-Semitic militias…