In the following article from one week ago, correspondent Fred Weir of the Christian Science Monitor reports on the new diplomatic efforts by Russia to pressure and convince Ukraine to end its war in the Donbass region in the east of the country. There is much of interest in Weir’s article. Unfortunately,  he misses the mark at several important points. 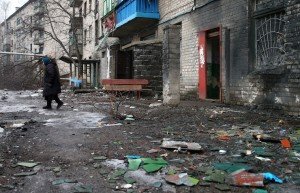 Weir begins his article with, “It looks like the Kremlin is getting serious about resolving the ongoing Ukraine crisis.” If the inference is that Russia has not devoted sufficient political attention and resources to the two-plus year old political crisis in Ukraine, particularly at its outset, that’s fair comment. An awful lot of people in Russia and in Ukraine hold such a view. But the article opening could equally be read as saying that Russia has not been serious about resolving the crisis and perhaps is not even interested in doing so. That’s just plain untrue.

In reviewing the progress, or not, of the political provisions of the Minsk-2 agreement, Weir cites a Russian journalist:

“The problem is that all sides treat the Minsk agreement like a menu, from which they will select just the parts that appeal to them,” says Sergei Strokan, foreign affairs columnist for the Moscow daily Kommersant. “But in order for it to work, it must be implemented in full. Nobody seems ready to do that yet, so it clearly needs a much stronger push.”

“All sides” of the agreement are not serious about Minsk? This is an unfortunate slight against the pro-autonomy forces of Donbass. What are they supposed to do as Kyiv has consistently failed to implement the 13 clauses of Minsk-2? Accede to Kyiv’s blackmail that they give up on their goal of solid, constitutional guarantees of autonomy and language and cultural rights? Allow one, two, how many? clauses of Minsk to be scrapped because Kyiv is not interested in implementing them?  Kyiv is still violating the most basic of the Minsk-2 clauses: that it cease shooting at the citizens of Donbass and cease its shellings of their homes and communities. Violations are continuing, notwithstanding a signed renewal of commitments to cease fire made ten days ago in Minsk, on January 13.

Clause one of Minsk-2 reads: “Immediate and full ceasefire in particular districts of Donetsk and Luhansk oblasts of Ukraine and its strict fulfilment as of 00:00 midnight EET on 15 February 2015.”

The halting Minsk process, meant to peaceably reunite Ukraine with its restive eastern regions, got a big boost in recent weeks with the assignment of two top Putin officials to key positions in the Russian team.

MOSCOW — It looks like the Kremlin is getting serious about resolving the ongoing Ukraine crisis. President Vladimir Putin appears to have put his best advisers on the case, bolstering hopes that 2016 will be the year the stalled Minsk II agreements, negotiated by France, Germany, Russia, and Ukraine to bring peace to war-ravaged eastern Ukraine, gain real traction.

Late last month, Mr. Putin replaced a relative nonentity who was leading the Russian negotiating team with Boris Gryzlov, a leading Kremlin security official. And he sent his top troubleshooter, Dmitry Kozak, to manage relations with the rebel Ukrainian republics of Donetsk and Luhansk.

Experts say that suggests the Kremlin is tiring of the long stalemate over the war-torn Donbass region, and is readying for a concerted push to solve remaining issues and prompt an end to the Western sanctions that even Mr. Putin admits are “severely harming” Russia’s economy.

On Wednesday, Mr. Gryzlov met with Ukrainian President Petro Poroshenko in Kiev, and on the same day a fresh truce was declared in eastern Ukraine to replace the badly frayed cease-fire set in place last September. In his annual press conference Thursday, Mr. Poroshenko pledged to restore Ukrainian sovereignty over Donetsk and Luhansk this year.

The Minsk accord calls for constitutional changes in Ukraine to grant autonomy to the rebel regions, hold elections in the Donetsk and Luhansk republics to establish legitimate leadership that could negotiate with Kiev, and to return rebel-held sections of the border to Ukrainian sovereignty. All of that was supposed to have happened by the end of 2015, but efforts fell apart amid intense controversy in Kiev, rebel refusal to hold their elections under Ukrainian law, and disagreement over when the border handover should occur.

“The problem is that all sides treat the Minsk agreement like a menu, from which they will select just the parts that appeal to them,” says Sergei Strokan, foreign affairs columnist for the Moscow daily Kommersant. “But in order for it to work, it must be implemented in full. Nobody seems ready to do that yet, so it clearly needs a much stronger push.”

In an interview with the German newspaper Bild this week, Putin said the border would be returned to Ukraine only once constitutional changes have established the autonomy of the rebel republics. In his Thursday press conference, Mr. Poroshenko pledged to implement all provisions of the Minsk deal, but did not address the ongoing disputes over interpretation.

“It seems that Ukraine’s view is to regain control over the border before allowing elections [in the rebel republics]. The U.S. appears to support this position,” says Mikhail Pogrebinsky, director of the independent Kiev Center of Political and Conflict Studies. “Russia’s view is the other way around. It’s not clear how this can be resolved. But Gryzlov’s participation will definitely elevate Russia’s direct participation in the talks, and raise the stakes.”

Gryzlov is a former speaker of Russia’s parliament, and a close confidant of Putin’s. “His appointment is very important because he’s a member of the Security Council, the highest organ of political leadership. His status allows him to talk with Putin more often than other high officials,” says Andrei Klimov, deputy head of the international affairs commission of the Federation Council, Russia’s upper house of parliament.

Mr. Kozak, a deputy prime minister who has previously been sent by Putin to deal with trouble spots like Russia’s turbulent north Caucasus and the recently annexed Ukrainian territory of Crimea, may have the job of twisting rebel arms and making them more amenable to a deal that would integrate the secessionist territories back into Ukraine.

“These appointments are important, and Ukraine should probably match them by sending higher officials to take direct part in the negotiations as well,” says Vladimir Panchenko, an expert with the independent International Center of Policy Studies in Kiev.

But, he warns, even any basic compromises by Poroshenko, such as recognizing the results of rebel elections that are now slated for March, could undermine Ukraine’s fragile political balance.

A new survey done by the International Republican Institute found that majorities in all regions of Ukraine, including the Kiev-controlled parts of Donbass, favor remaining part of Ukraine. But, at the same time, pessimism and disillusionment with authorities is spiking in all parts of the country, especially in the troubled Russian-speaking east.

“Lack of political trust and falling morale are realities in both the rebel republics and Kiev-controlled parts of the country,” says Mr. Strokan. “Even with a renewed diplomatic push, and more efforts from outside, there are still way too many unpredictable factors. I fear this mess will be with us a long time.”