New Cold War is reposting this small news item because it bears on understanding the relations between international actors and the LNA and the LGA, the two embattled forces in Libya. Earlier reports hinted at French support for the LNA, but the LGA generally has the support of the West. This report suggests these earlier rumours of French involvement with the LNA are less credible.

Chinese-made LJ-7 air-to-surface guided missile was used in airstrikes on forces loyal to the Libyan Government of National Accord (GNA) over the last month, defense analyst Arnaud Delalande revealed in an investigation published by the AeroHisto blog on April 29.

The LJ-7 is the export version of the semi-active laser guided HJ-10 missile. The missile has a range of up to 7km and its warhead is capable of penetrating 1,400mm of armour. The Chinese-made CAIG Wing Loong Wing Loong unnamed combat aerial vehicle (UCAV) is known to be the main carrier for this type of missiles.

According to Delalande’s investigation, LJ-7 missiles were used in a series of airstrikes on pro-GNA forces in the towns of Wadi Rabe’, Al-Hira, al-Azizia and Ain Zara between April 17 and 21.

In April 18, Libyan sources reported that foreign UCAVs carried out airstrikes on gatherings and vehicles of GNA forces south of the Libyan capital, Tripoli. Back then, the sources claimed that the French Air Force was behind the airstrikes. However, experts suggested that the UAE Air Force (UAEAF) was responsible.

The UAEAF has a large presence in the al-Khadim airbase in western Libya. A report of IHS Jane’s had revealed that the airbase is hosting six IOMAX AT-802i BPA light attack and recommission warplanes, two Sikorsky UH-60 Black Hawk helicopters and last but not least two Wing Loong UCAVs. 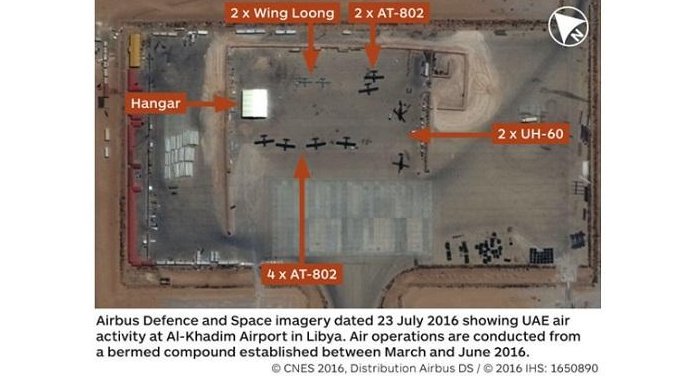 The remains of the LJ-7 missiles allowed some to speculate that UAEAF Wing Loong UCAVs were behind the mysterious airstrikes on GNA forces. However, this can’t be confirmed yet, especially that other countries involved in the Libyan war, like Egypt, are known to be operating the same type of UAVs.