By John Ross, 6 Feb 2018.  Originally published on Learning From China. China’s socialist economic ‘reform and opening up’ improved the lives of vastly greater proportion of humanity than any other country in human history.

An earlier article in this series marking the 40th anniversary of China’s ‘Reform and Opening Up’ showed that ​China since 1978 is the fastest sustained growth by a major economy in human history. But this historic fact, although extraordinary in its own right, actually considerably understates the immense scale of China’s achievement. The reason for this is that China is such a larger part of humanity than any other country which has ever undergone sustained very rapid economic growth – with the enormous improvement in living standards this produces.  To demonstrate this the chart and the table below show the percentage of the world’s population at the time when major economies began sustained rapid economic growth. Analysing these historical examples:

Although both the rapidity and scale of China’s economic achievement since the beginning of its socialist ‘reform and opening up’ in 1978 dwarfs any other economic growth in human history even this is not its most important achievement. Most important is the improvement in the lives of ordinary Chinese people. As will be shown in later articles this produced the most rapid increase in living standards of the greatest number of people in human history and mean China accounted for a greater reduction of the number of those living in poverty than the rest of the world put together. These issues will be analysed in future articles in this series. 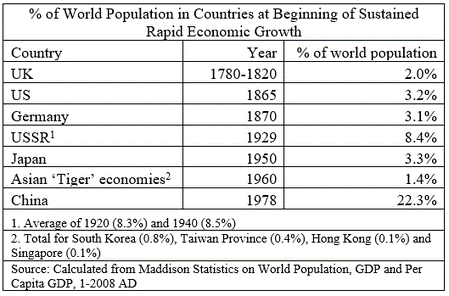