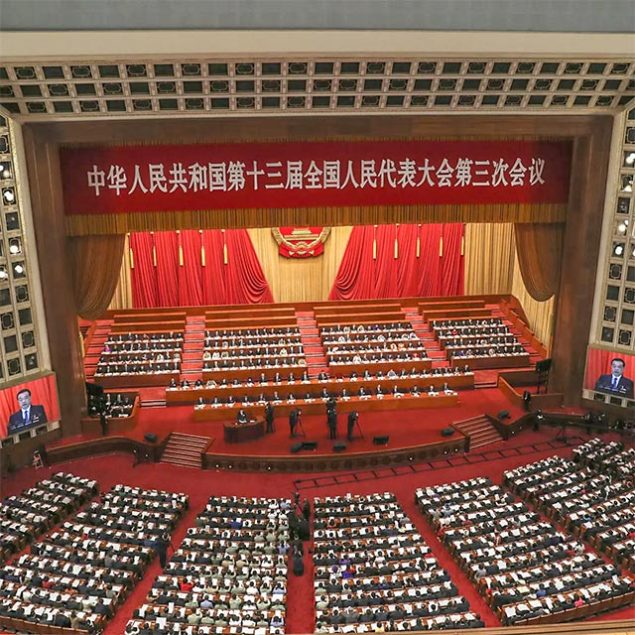 Li Keqiang give his speech in the Great Hall of the People in Beijing. Ng Han Guan/EPA

When Chinese Premier Li Keqiang delivered his annual report to China’s national legislature on May 22, his focus was firmly on COVID-19.

When Chinese Premier Li Keqiang delivered his annual report to China’s national legislature on May 22, his focus was firmly on COVID-19. His 55-minute speech to the gathering of China’s National People’s Congress (NPC) put the prevention and control of COVID-19 at the heart of the government’s strategy for the year ahead. The focus will be on protecting employment, livelihoods, businesses and supply chains from collapse.

While media coverage of the NPC was dominated by China’s plan to enact new security powers in Hong Kong, the meeting also reveals how cautious China is about its coronavirus recovery.

Western European countries are pursuing a return to normal, but Li signalled that in the coming year, the plan for China is a “normalisation of prevention and control”. Although Li did not set out in detail what control would mean, it currently involves measures that go beyond just track and tracing to widespreadtemperature controls and social distancing measures. In his opening passage, he warned: “The pandemic is not over.”

The speech, known as the government work report (政府工作报告, zhengfu gongzuo baogao), stressed that continued vigilance against the coronavirus will be a core thread determining everything from macro-level strategy down to micro-level policy for the foreseeable future in China. This may reflect the fact that China has recently experienced new localised outbreaks of the virus – most notably in its north-eastern provinces.

The government work report is delivered every year on behalf of the executive branch of government to parliament. Its deliberation by the NPC is mainly a formality.

Delayed for over two months due to the pandemic, anticipation of 2020’s report was high, with audiences waiting to hear how the Chinese government would move forward. Li made clear that all efforts toward socioeconomic development must be planned in coordination with pandemic prevention and control. In other words, preventing and controlling coronavirus will go hand in hand with planning, decision-making and implementation of government policy over the coming year.

Although some international media had predicted Li would claim victory over the virus, he was in fact only cautiously positive. He stressed the challenges ahead and noted that successes so far had come “at great cost”. His speech was unembellished, his tone solemn and matter-of-fact.

Our research shows that in fact this was to be expected: the government work report is aimed at multiple audiences, but its key role is to signal to government departments and officials what their work should focus on in the coming year. It must therefore adopt a measured tone.

Li’s speech was also shorter and very different in structure from his reports in previous years. In Chinese government reports, format and structure are used to signal priorities and principles. This time the speech was almost halved in length – 20 pages compared to 35 in 2019 – and structured differently to the standard format of the last decade.

The atypical length reflected the need to prioritise efficiency, both in the context of the continued presence of the virus – where all interactions, even the meeting he was speaking at, still pose a risk – and in the tough job of getting the economy going. The structure of the speech reflected the government’s new development strategy. Dropping concrete targets for GDP for the first time since 1990, Li left room for flexibility in the face of continued COVID-19 uncertainty. The speech also allowed local governments space to pursue policies to mitigate the social effects of the pandemic rather than focus purely on economic recovery. 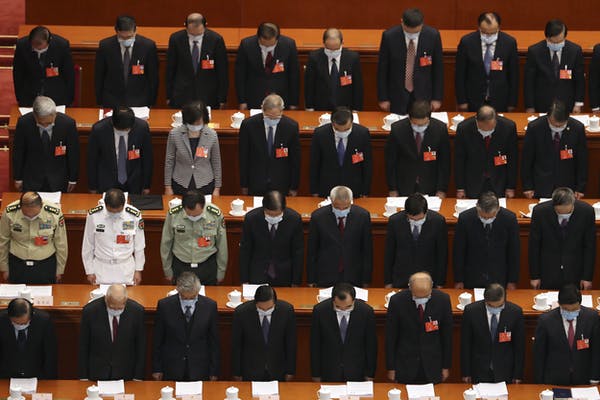 The 2020 National People’s Congress was delayed by two months by the coronavirus pandemic. Ng Han Guan/EPA

Li’s strategy for mitigating the damaging effects of the epidemic for society and the economy was summed up in the short slogan, the “Six Protections”. These six protections are: job security, people’s livelihoods, businesses, food and energy security, stable industrial and supply chains, and the functioning of the lower levels of the Chinese government’s five-level hierarchy.

This slogan forms the core of the Chinese government strategy, and is integrated into the national leadership’s recent goals of ensuring stability in employment, finance, foreign trade, investment, and market expectations.

Implementing the strategy will involve the national government both introducing new policies and strengthening existing ones. This includes allowing a ¥1 trillion (£115 billion) rise in the fiscal deficit and earmarking ¥1 trillion of special governments bonds for the as yet defined purpose of “COVID-19 control”. All this will to be transferred to local governments so that they can support employment, basic needs, and businesses.

Overall, the key message from the Chinese government in its annual work report is that rather than returning the economy and society to normal, or relaxing restrictions (as many European countries are trying to do), for the foreseeable future it is putting prevention and control of the epidemic front and centre.