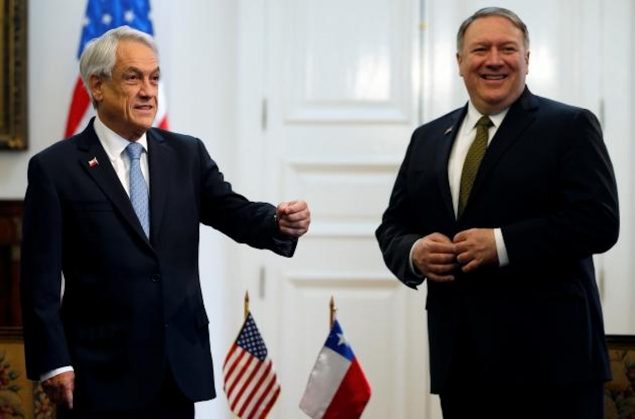 Secretary of State Pompeo calls out China and Russia for spreading “disorder” in Latin America, through failing investment projects, especially in places like Venezuela.

Speaking [on] Friday [April 12] in Chile [at] the start of his three-day South American tour, Secretary of State Mike Pompeo called out China and Russia for spreading “disorder” in Latin America through failing investment projects that only fuel corruption and undermine democracy, especially in places like Venezuela.

According to Bloomberg, Pompeo specifically listed a failing dam project in Ecuador, police advisory programs in Nicaragua, and Chinese loans to the Maduro government, which goes further back to Chavez.

Pompeo asserted Chinese loans in Latin America “often injects corrosive capital into the economic bloodstream, giving life to corruption, and eroding good governance.” Both Beijing and Moscow have ultimately spread their economic tentacles into the region to “spread disorder,” he added.

In what appears an effort to sustain momentum toward pressuring regime change in Caracas, America’s highest diplomat met Chilean President Sebastian Pinera earlier Friday, and will hit Paraguay, Peru next, and finally on Sunday will travel to a Colombian town on the border with Venezuela.

Pompeo and Piñera also generally discussed the U.S.-China trade war and Beijing’s “Belt and Road” initiative, with Pompeo suggesting he was optimistic about solving the tariff war with China. But the focus remained finding a US-desired outcome to the Venezuela crisis.

As part of the broader pressure campaign on Maduro, Pompeo said the U.S. has revoked visas for 718 people and sanctioned over 150 individuals and entities. On Friday, the U.S. sanctioned four companies it says transport much of the 50,000 barrels of oil that Venezuela provides to Cuba each day.

Late last month Pompeo had even more directly addressed Moscow, calling on Russia to “cease its unconstructive behavior” after it deployed a small troop contingency to Caracas to service existing military equipment contracts. Notably, Venezuela also has Russia’s S-300 air defense missile system, which over the past month have been reported deployed to a key airbase south of the capital of Caracas.

And in February Pompeo claimed in an interview with Fox News that “Hezbollah has active cells in Venezuela” — an assertion that has seemed to disappear from the spotlight of late.

China, for its part, has proactively offered to help Venezuela with its failing power grid, after a series of devastating mass outages over the past month has resulted in “medieval” conditions amidst an already collapsing infrastructure. Beijing also recently denied it has deployed troops to Venezuela after media reports a week ago cited online photos which appeared to show a Chinese military transport plane deployed to Caracas.