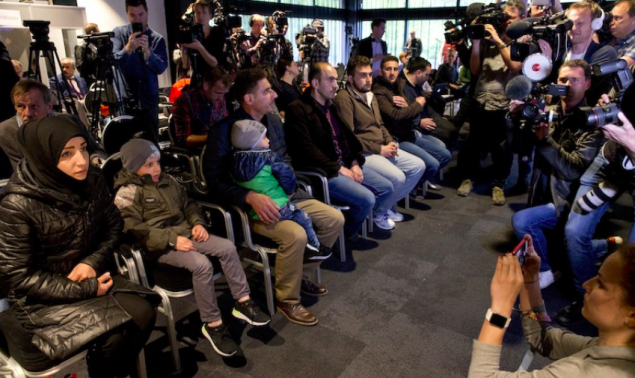 Syrians at The Hague, Netherlands, face the media in a bid to discredit reports of a 2018 chemical weapons attack in the Syrian town of Douma. (Peter Dejong / AP)

A spate of leaks from within the Organisation for the Prohibition of Chemical Weapons (OPCW), the international inspectorate created for the purpose of implementing the Chemical Weapons Convention, has raised serious questions about the institution’s integrity, objectivity and credibility.

A spate of leaks from within the Organisation for the Prohibition of Chemical Weapons (OPCW), the international inspectorate created for the purpose of implementing the Chemical Weapons Convention, has raised serious questions about the institution’s integrity, objectivity and credibility. The leaks address issues pertaining to the OPCW investigation into allegations that the Syrian government used chemical weapons to attack civilians in the Damascus suburb of Douma on April 7, 2018. These allegations, which originated from such anti-Assad organizations as the Syrian Civil Defense (the so-called White Helmets) and the Syrian American Medical Society (SAMS), were immediately embraced as credible by the OPCW, and were used by the United States, France and the United Kingdom to justify punitive military strikes against facilities inside Syria assessed by these nations as having been involved in chemical weapons-related activities before the OPCW initiated any on-site investigation.

The Douma incident was initially described by the White Helmets, SAMS and the U.S., U.K. and French governments as involving both sarin nerve agent and chlorine gas. However, this narrative was altered when OPCW inspectors released, on July 6, 2018, interim findings of their investigation that found no evidence of the use of sarin. The focus of the investigation quickly shifted to a pair of chlorine cylinders claimed by the White Helmets to have been dropped onto apartment buildings in Douma by the Syrian Air Force, resulting in the release of a cloud of chlorine gas that killed dozens of Syrian civilians. In March, the OPCW released its final report on the Douma incident, noting that it had “reasonable grounds” to believe “that the use of a toxic chemical as a weapon has taken place on 7 April 2018,” that “this toxic chemical contained reactive chlorine” and that “the toxic chemical was likely molecular chlorine.”

Much has been written about the OPCW inspection process in Syria, and particularly the methodology used by the Fact-Finding Mission (FFM), an inspection body created by the OPCW in 2014 “to establish facts surrounding allegations of the use of toxic chemicals, reportedly chlorine, for hostile purposes in the Syrian Arab Republic.” The FFM was created under the direction of Ahmet Üzümcü, a career Turkish diplomat with extensive experience in multinational organizations, including service as Turkey’s ambassador to NATO. Üzümcü was the OPCW’s third director general, having been selected from a field of seven candidates by its executive council to replace Argentine diplomat Rogelio Pfirter. Pfirter had held the position since being nominated to replace the OPCW’s first director general, José Maurício Bustani. Bustani’s tenure was marred by controversy that saw the OPCW transition away from its intended role as an independent implementor of the Chemical Weapons Convention to that of a tool of unilateral U.S. policy, a role that continues to mar the OPCW’s work in Syria today, especially when it comes to its investigation of the alleged use by the Syrian government of chemical weapons against civilians in Douma in April 2018.