A day in court for Ukrainian businessman-turned-politician Hennadiy Korban descended into chaos after thugs barged into the courtroom in Kyiv and began randomly beating those in attendance. 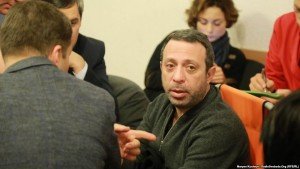 In a video uploaded to the Internet by Korban’s UKROP party, young men, many wearing hoodies and other athletic attire, can be seen storming into the cramped quarters of the courtroom at the Dnipro District Court on December 27, amid screams of protest, mainly from the women present.

According to the Ukrainian news agency, UNIAN, whose correspondent was beaten, police did little to stop them. As Korban supporters tussled with the troublemakers, a fire extinguisher went off repeatedly.

Korban was in the court at the time of the fracas, transferred from a hospital in the Ukrainian capital where he is receiving treatment. Earlier this month, Korban was diagnosed with coronary artery disease.

According to UNIAN, his doctors were blocked from attending to Korban, who reportedly fainted during the melee.

The 45-year-old Korban was detained on October 31 on suspicion of kidnapping, embezzlement, and having ties with organized crime. Specifically, he was accused of stealing $1.7 million from the National Defense Fund, whose resources are earmarked for Ukrainian soldiers fighting pro-Russian separatists in eastern Ukraine.

Ukrainian officials have denied that politics is involved in the case. On November 6, Korban was placed under house arrest until December 31.

The court proceedings now taking place are considering whether Korban should be held in pretrial prison detention, as prosecutors are demanding.

Korban, a former deputy governor of the Dnipropetrovsk region, and his supporters insist that his arrest is politically motivated. Korban is the head of UKROP, an opponent of President Petro Poroshenko and hails from the eastern industrial city of Dnipropetrovsk where in the 1990s he became a business partner of Ihor Kolomoyskiy, a banking, energy, and media tycoon.

Korban has said his interest was is “redistributing the wealth of some to others.” Forbes estimates his worth at $55 million.

A co-founder of the Privatbank banking chain, Kolomoyskiy was once a key ally of the central government, reportedly arming and financing militia groups to hold off pro-Russian separatists [sic]in the east.

Poroshenko signed off on Kolomoyskiy’s dismissal as Dnipropetrovsk governor in March after accusing him of setting up a private militia and trying to take over a state-affiliated oil company.