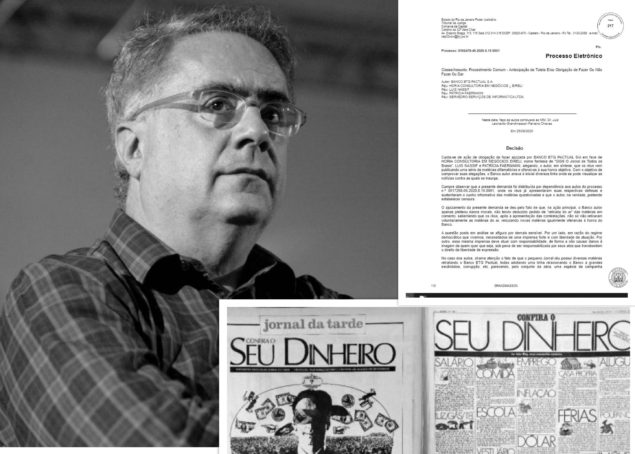 On August 29, 2020 a Rio de Janeiro state judge issued an order to veteran journalist Luis Nassif to pull down 11 investigative articles from his blog, GGN, about the relationship between right wing Brazilian politicians and big data companies. The ruling was issued at the request of BTG Pactual, the politically connected Brazilian investment bank with a $10 Billion portfolio which was founded by Brazilian President Jair Bolsonaro’s Economics Minister Paulo Guedes.

It wasn’t the first time that powerful agents connected to the Bolsonaro administration have tried to censor Nassiff, 70, an award winning journalist and former editorial board member of Brazil’s largest Newspaper, Folha de São Paulo. Last November, after referring to Rio Governor Wilson Witzel’s orders for police install snipers at the entrance of favelas as “genocidal”, two civil police officers visted Nassif in his apartment, guns drawn, and asked him to stop criticizing the governor.

As legal reporter Marcelo Auler writes, Brazil’s 1988 Constitution prohibits any kind of censorship. “Therefore, independently of the content of the articles published by Nassif, judge Ferreira Chaves ruling is unconstitutional”.

The ruling came in response to a series of investigative reports on moves made by the bank to increase data mining of public databases, such as the São Paulo City Government’s Zona Azul parking system, which has 3.5 million affiliated credit card users. In one article the São Paulo City Government is accused of violating public procurement legislation in passing over administration of the city’s parking system to BTG.

In the ruling issued against GGN and Nassif, the court declares the 11 articles to be “frivolous and without concrete evidence”. However the São Paulo public prosecutors office has already initiated an investigation into BTG’s bid on Zona Azul based on evidence presented in one of the banned articles.

The issue of censorship of articles about BTG Pactual is important because the illegal manipulation of big data during the 2018 presidential elections is now viewed as one of the key reasons that Bolsonaro was elected. Furthermore, BTG Pactual founder Paulo Guedes, who spent over a decade in Chile during the neofascist Pinochet dictatorship, has personal connections to actors from both the Chilean office of Cambridge Analytica and Artool, the largest Chilean big data company. As Joana Vasconcelos and Rejane Hoeveler wrote in an article linking Paulo Guedes to Chilean fascists that was published in Brasil Wire one month after the 2018 elections, “If there are signs that the Jair Bolsonaro campaign in Brazil could have been strengthened – as was the case of Donald Trump in the US – with the theft of millions of people’s personal data from the social media networks, among them WhatsApp, and the dissemination of fake news on a previously unseen scale, the Chilean far-right has all of the tools to do it. “

A Wall of  Silence

If a former New York Times or Guardian editorial board member was threatened by the police at gunpoint or had a judge order 11 investigative articles pulled offline, the odds are that there would be an international outcry with expressions of solidarity from journalists of all stripes and sizes on their social media accounts. In the case of Brazil’s large and sophisticated independent media which, as I wrote in 2019, is usually right, always ignored, the normal path taken by foreign correspondents and analysts has been to simply pretend it does not exist. Luis Nassif is an award winning journalist with 50 years experience and 300,000 Twitter followers who has worked for some of the largest media outlets in Latin America. Nevertheless, neither last year’s police harassment nor the current censorship has been enough to merit even minor solidarity statements on Twitter members of the international journalist community who feign to care about freedom of the press and the rise of fascism in Brazil.