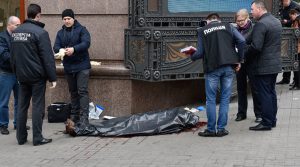 Scene of murder of Denis Vorokenkov in broad daylight in central Kyiv on March 23, 2017 (Sputnik)

In the video, a man in casual clothes and wearing a hood is seen walking fast, approaching Voronenkov and his bodyguard in the street from behind. When he catches up with the men, he is seen taking out a gun. The man in darker clothes – the former Russian politician Voronenkov – faces the attacker and then immediately falls to the ground. The camera also captures a girl walking past with her back to the murder scene. She then starts running, apparently scared by gunshots.

The man in lighter clothes – Voronenkov’s bodyguard – is seen throwing himself at the assailant. However, he can also be seen falling to the ground, while the attacker ensures that Voronenkov is dead. The attacker then tries to flee and turns the corner, out of sight of the video, but the bodyguard is seen firing at him. Seemingly injured and in pain, the bodyguard then checks on Voronenkov, while vehicles drive past, none of them stopping.

The exchange of fire happened in broad daylight on Thursday, in front of the main entrance to the Premier Palace Hotel in central Kyiv. Ukrainian police later said the former lawmaker was shot twice in the head, and that his bodyguard was injured. The suspected attacker was also injured and later died in hospital, with police saying they’ve established his identity as a Ukrainian national.

Voronenkov, 45, was a former member of the Russian Communist Party and emigrated from Russia to Ukraine in October last year. He received Ukrainian citizenship in December, having given up his status as a Russian citizen. The fugitive lawmaker had been on a federal wanted list in Russia and on an international wanted list, charged with masterminding a large-scale fraud.

Less than an hour after the killing, Ukrainian President Petro Poroshenko called it “an act of Russian state-funded terrorism.” Russia has rejected accusations of links to Voronenkov’s killing, with Kremlin spokesman Dmitry Peskov calling any such allegations “absurd.”

KYIV – The suspected killer of a former Russian lawmaker was a Ukrainian citizen who served in the National Guard but did not take part in military operations in the Donbass region, an adviser to the Ukrainian interior minister said on March 24.

Anton Gerashchenko identified the suspected gunman as Ukrainian citizen Pavlo Parshov, born in 1988 and an “agent of the Russian special services.”

Gerashchenko said Parshov served a year in the Ukrainian National Guard and left the service last August. “He did not participate in combat operations,” Gerashchenko wrote on his Facebook page in response to local reports alleging that Parshov took part in the Donabss campaign.

The lawyer said Parshov called her on Thursday saying that he was being attacked by journalists in a social network. “He does not understand what is happening. When he was on his way, I found out from our mass media reports that he is a ‘killer’ and he is already ‘dead’. When he arrived [at lawyer’s office], he was surprised,” lawyer Elena Krechetnikova said.

Earlier, an adviser to Ukraine’s interior minister, Anton Gerashchenko disclosed the name of Voronenkov’s murderer. He said the killing was committed by Ukrainian citizen Pavel Parshov, born in Sevastopol in 1988, who served in the country’s National Guard.

Media reports said the suspected assassin of Voronenkov had been placed on a wanted list by Ukraine’s law enforcers for illegal activity such as fraudulent deals and money laundering. The information on Parshov is correct, and Ukraine’s law enforcers will have to find out if this is just a coincidence or the killer “stole” the biography of another man.

Voronenkov, a former State Duma member from the Communist Party, was gunned down in a shootout near the entrance to Premier Palace Hotel in downtown Kyiv on Thursday. The attacker approached him and fired several shots with a handgun. Voronenkov’s bodyguard returned fire. The bodyguard and the attacker were wounded and taken to hospital. The killer died in hospital hours later.

In December 2014, Voronenkov was stripped of his parliamentary immunity in connection with criminal proceedings over the seizure of a building in central Moscow. In October 2016, Voronenkov fled to Ukraine. In February this year, he was formally charged with fraud and put on an international wanted list.