Canadian taxpayers’ money as backdrop to far-right violence in Ukraine

The state is an apparatus of violence and coercion. So Vladimir Lenin claimed, and this is one of his theses rarely questioned by critics, even the strongest of them.

If, in the course of some processes, one state is demolished or its territory is seized by a neighbouring state, another state necessarily emerges in its place. Sometimes, though too rarely, an entirely new state could emerge promoting higher social values. This was the case throughout the twentieth century. But in today’s world, in particular in the case of Ukraine, the impossible has become possible. Ukraine has introduced a new type of state, with a power base among independent groups of militarized “patriots” and who the government relies upon for much of its repressive apparatus.

After some months of confrontation in late 2013, early 2014, the old police system was demolished in the capital city Kyiv. Several months later, the new ‘Maidan’ government’s so-called Anti Terrorist Operation was launched in eastern Ukraine. According to the ‘ATO’, the army was effectively placed under the control of extra-legal patriots and far-right radicals. The national police did not disappear as an institution, but it was fractured and demoralized.

The new political leadership of Ukraine, born in very violent clashes with existing law enforcement agencies on Maidan Square in Kyiv, has organized loyalty screening for police officers and fired some 30 per cent of police staff. Right-wing extremists, including those who fired upon and even killed police during the Maidan protests, became a part of the screening commissions selecting and deselecting police officers. One result is that officers now feel less protected while doing their job because in case of conflict with far-right activists, often backed up by right-wing media, officers ccannot presume to receive fair judgment of their actions.

However, the weakening and fracturing of a police apparatus of violence and coercion does not at all mean that there is less violence in Maidan Ukraine. In many cases, uultra-nationalist mobs occupy the role formerly played by law enforcement. Mob participants are ‘anonymous’ amidst large crowds and therefore feel impunity from international tribunals that might otherwise act to curb right-wing violence. It is this extra-legal element that has created a parallel goverment in Ukraine, complete with its own power bodies and even courts. A lynch court is still a court, and as Mao Tze-Tung once famously said, “Political power grows from the barrel of a gun.” The ‘parallel government’ of extremists and murderers in Ukraine does not mean the absence of power nor the absence of external puppet masters supporting it.

Any significant government initiatives in today’s Ukraine are blocked by the extreme-right if the initiatives contradict its goals. Take, for example, the Minsk-2 ceasefire and peace agreement of February 2015. Ukrainian authorities cannot outright abandon Minsk-2 because of foreign political pressure. That’s because Western governments need to maintain a façade of concern for the violence in eastern Ukraine. At the same time, Kyiv cannot fulfill the agreement because of the pressure on it from the extremist minority inside the country.

The West and its feigned concerns are a long way away, while the neo-Nazis are here. The nationalistic mob is ready to seize the streets, state institutions, commercial firms and other targets in support of blockades against the autonomous republics of Donbass (Donetsk and Lugansk), Crimea, and Russian banks operating in Ukraine. Rallies in support of social rights or opposed to war are almost impossible to stage safely in today’s Ukraine. Surprise! The same radicals are always ready to stop this kind of protest activity.

I won’t tell you how such problems are usually solved in a civilized society – you might know it better than me. I’d rather tell you how it works out in Ukraine.

If the city head or some other elected official is found to be in contact with the ‘wrong’ parties and interests, any of his or her decisions (including truly insignificant ones) can become a pretext for violent actions. The mob may demand the resignation of an ‘undesired’ government official when he or she acts contrary to its perceived interests. This happened recently in the central Ukrainian city of Poltava. There, the far-right recently seized the building of the regional administration demanding the resignation of the elected mayor. The reason was the proposed construction of a district of small shops in the center of the city.

Some ultra-nationalists dislike the project. The reasons vary, but for some, the material interests of some sponsors were at variance with ideas championed by the nationalistic mob. The development is not something crucial that would change the city’s appearance, such as a large, infrastructure project or the construction of a skyscraper in the middle of an historic district. In this case, the issue was as small as kiosks [small shops] that local authorities planned to build to make urban living more convenient. But the local neo-Nazis decided to use situation as an opportunity to demonstrate their street power and perhaps extort some quick cash from political and business competitors of the investors in the kiosks project.

So, the neo-Nazis showed up on April 10 armed with knives, bats and pepper spray to attack and dismantle the project. Employees of the security company assigned to protect the project were declared ‘mercenaries’ and the nationalist campaign has inevitably demanded of the resignations of some elected officials. 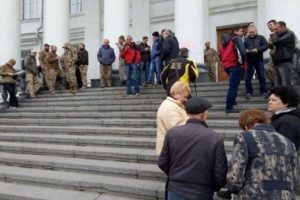 Far-right blockade of the city council building of Poltava, Ukraine in April 2017 (photo by RIA Novosti)

Local government buildings were blocked and occupied for about a week, until the anti-kiosk mission succeeded. The mayor of Poltava called the seizure of the buildings acts of “terrorism”.

From where do the “civil activists” come who have led Ukraine to civil war and who continue to destabilize it from within?  The answer is quite simple: their emergence and development has been generously financed from within and abroad. The funding comes from private foundations as well as Western programs for the development of “democracy society”. Year by year, from the earliest stages of Ukrainian independence in 1991 up to the recent days, most international programs for the development of democratic institutions actually assisted and encouraged far-right radicals along with their nationalistic, Russophobic and anti-communist ideology and sentiments.

Enormous amounts of money from private Western foundations and Western taxpayers have inflated a system wherein far-right spokespeople pose and are welcomed as “experts” in almost any social issue that can be named – from modern art to human rights activism, from sports to economics.

All this recalls the anti-utopia doctrine of George Orwell in his classic book 1984. The ruining of industrial cooperation by Ukraine with Russia during the past three years – with absolutely no economic benefit to the country – is being called “Western-style democracy” and “the only democratic option for Ukraine”. Any initiative that would make Russian–the mother tongue of nearly half of all Ukrainian citizens–the second national language of the country is considered equivalent to “state treason”.

Of particular note is a technical assistance project funded by the government of Canada and implemented by the Canadian Federation of Municipalities called ‘Partnership for Local Economic Development and Democratic Governance Project‘ (PLEDDG). It has been working in the Poltava region for the past six years in the towns of Mirgorod, Kremenchug and Gorishnie Plavni. According to the information posted on the official website of PLEDDG, the program “aims to strengthen Ukraine’s municipal sector by increasing capacities of Ukrainian cities to advance local democracy and economic development.”

“More broadly, we support the empowerment of people and local governments to enrich the positive outcomes of open government and economic growth,” the project initiators claim.

The term “empowerment of people” can be understood in a Ukrainian context as the seizure of public buildings by radical, ultra-nationalist groups interested only in their narrow view of society and ’empowered’ to impose their will as they see fit. It seems it is precisely towards such ‘development’ that the money of Canadian taxpayers is directed.

Of course, the spending by Canadian foundations is primarily the business of Canadians themselves. However, when these foundations work for the destabilization of Ukraine, this becomes a problem for Ukrainians too.

Blockade of the city council of Poltava

The mayor of Poltava, Alexander Mamai, has stated that he would not convene an extraordinary session of the city council and he has promised to apply to the police regarding the blocking of the Poltava City Council building.

“There was a seizure of the administrative building. Thirty people were responsible, among them 18-year-old children, I will not negotiate with them.”

“The last session of the City Council was held on March 24. According to the law, I must convene the next meeting of the council not later than June 24. I repeat that I will raise the issue of a moratorium on kiosks in Poltava at a regular session, this issue will be unanimously adopted, and there is also the decision of the businessman Viktor Stepanenko to stop construction work on the street arches on newspaper row. A conciliation council will form an agenda with the represesntatives of all factions,”the mayor said.

The employees of the Poltava City Council could not get to work in the morning due to the blocking of the administrative building and decided to take a break from work and organize a cleaning day for the Suprunovsky overpass, according to the publication 0532.ua.

Earlier, it was reported that in the center of Poltava, protests, including the use of knives, against the construction of street arches occurred. There were clashes between activists and representatives of a private security company, as a result of which several people were injured. Five criminal proceedings were started and 12 people were detained.