It is official that Canada will be deploying 200 military personnel for a period of up to two years to train Ukrainian soldiers. The stated purpose of this commitment is to enhance the Ukrainians’ capacity to withstand further “Russian aggression.” 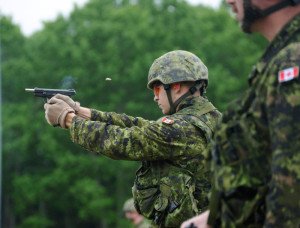 For the last year, Ukraine has been embroiled in a violent albeit localized civil war in the volatile eastern provinces.

Following the ousting of Viktor Yanukovych from the presidency in February 2014, pro-Western Ukrainian lawmakers declared themselves the official interim government in Kyiv. While they were never fully enamoured of Yanukovych, the residents of eastern Ukraine remained pro-Russian, particularly as many of those living east of the Dnieper River are actually ethnic Russians.

Not trusting the new interim government to protect their minority rights, protesters in eastern Ukraine mimicked the tactics of rioters in Kyiv who had forced Yanukovych into exile. The pro-Russian demonstrators seized and occupied government buildings in defiance of Kyiv’s central authority.

Having assisted the new pro-Western government to seize power, Western nations, of which Canada was one of the most vocal, had denounced Yanukovych’s use of force against demonstrators. However, they soon turned a blind eye when the new regime clamped down on the pro-Russian protesters.

Fewer than 80 people had been killed during the Maidan riots in Kyiv, yet the West labeled Yanukovych a bloodthirsty dictator. Kyiv’s clumsy attempts to subdue the rebellious territories in the east quickly escalated into a full-scale civil war, which has, to date, left more than 6,000 people dead. 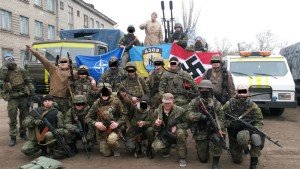 Thus far, the breakaway self-proclaimed republics of Donetsk and Luhansk have successfully fended off all attacks by Ukrainian military units and their privately owned militia allies. Although referendums were held, with the majority vote desiring Russian annexation as occurred in Crimea, Russian President Vladimir Putin has, at least up until now, steadfastly refused to take such action.

There is no doubt that Russia is assisting the pro-Russian rebels with weaponry, volunteers and advisers. This is loudly decried by Western countries as underhanded interference in a Ukrainian civil war, despite the fact those same countries proudly boast of their own provision of military equipment and advisers to assist the Kyiv regime in that same war.

Which brings us back to Canada, and its recurrent role in training more young men how to fire yet more weapons to achieve peace in yet another complex conflict.

Before continuing, I wish to state my own personal bias, in that I firmly believe Canadian soldiers to be among the very best in the world. That said, our record of training effective foreign forces remains abysmal.

We spent more than a dozen years in Afghanistan mentoring and training Afghan security forces. Historically, there are probably no fiercer warriors on the planet than the Afghans. However, with all of our soldiers’ professionalism and patience, we were never able to create anything better than an unreliable third-rate Afghan force.

Without direct NATO supervision, the Afghan police force is despised by the local population for its widespread corruption. Many Afghan army units considered selling their NATO-supplied ammunition to the Taliban to be part of their basic pay package.

The problem was not with the NATO trainers but rather with the motivation of the Afghan recruits. Those who joined the government security forces did not do so out of a burning desire to prop up the regime of president Hamid Karzai. His regime was widely despised, and rightfully so. No, those Afghans who joined the military and police did so because of the paycheque. With NATO’s emphasis placed on security rather than education, an Afghan soldier made nearly three times what an Afghan teacher was paid.

On the flip side, those Afghans who joined the ranks of the Taliban proved themselves all too willing to sacrifice their lives in suicide attacks to drive the foreigners from their country.

Applying the motivation factor to our soldiers’ current challenge of training Ukrainians, it will all come down to whether the Ukrainian recruits are as willing to die forcing the pro-Russian rebels to submit to the will of the Kyiv government as the pro-Russians are willing to die to prevent that from happening.

For the record, the current Ukraine government ranks 142nd out of 175 countries on the Transparency International Corruption Perceptions Index, tied with Uganda and the Comoros.

Is that really something you want to die defending?

Scott Taylor is a former member of the Canadian Armed Forces. He is the editor and publisher of Esprit de Corps, “Canada’s only independent, monthly defense magazine. Since 1988.”

Read also:
Those Canadian troops in Ukraine? The Minsk II Agreement says they need to be pulled out right now, by David Climenhaga, published on Rabble.ca, Feb. 16, 2015 and on his website Alberta Politics

E-mail to Scott Taylor, April 20, 2015:
Hello Mr. Taylor,
I appreciate very much your thoughtful column yesterday in the Herald. That said, I think there are three additional items to consider:
1. The decision of the U.S.-UK-Canada troika to send soldiers to western Ukraine is a violation of the spirit, if not letter, of the Minsk 2 ceasefire agreement. That called for foreign soldiers to get out or stay out of Ukraine.
2. The Minsk agreement called on Ukraine to negotiate the grievances of the rebels in eastern Ukraine, particularly their demands for political autonomy. Last spring, the civilian protest movement (whose origin you describe very well) called their main political demand ‘federalization’, that is, a constitutional setup not dissimilar to those of Canada and the U.S. But the answer by Kyiv all along has been “No, no, no”. Not only has Kyiv failed to enter talks, it does not even recognize the political entities of the rebels and it blockades the rebel territories.
3. You rather diplomatically refer to the “privately owned militia allies” of the Ukraine government. These may be referred to less diplomatically as “neo-Nazi militias and paramilitaries”. David Pugliese’s recent article in Postmedia hit the nail on the head: are Canadians comfortable with their armed forces being assigned to train neo-Nazi militias? Minister Kenney reassured us by saying (I paraphrase): ‘Don’t worry, the neo-Nazis are being integrated into the regular army. It is the army that we will be training.’ Small comfort. I wish more WW2 veterans and their families would speak up against this awful political alliance Canada is forging.
Regards,
Roger Annis
www.newcoldwar.org
Editors’ Note: While we don’t necessarily share the views we publish on New Cold War, we do attempt to provide readers with a range of views. This is because your right to make your own mind up depends on your being fully informed.
Share
Tweet
Share
Pin