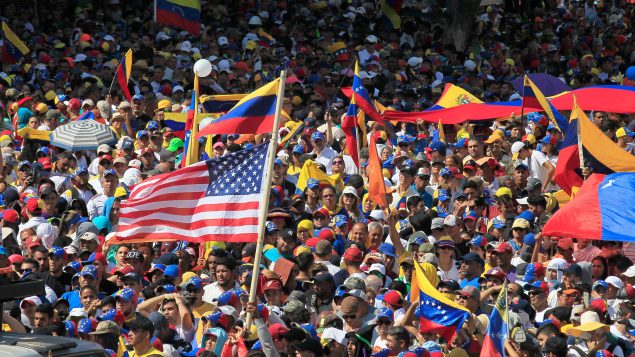 Opposition supporters take part in a rally against Venezuelan President Nicolas Maduro’s government and to commemorate the 61st anniversary of the end of the dictatorship of Marcos Perez Jimenez in Maracaibo, Venezuela January 23, 2019. (Isaac Urrutia/REUTERS)

“An umbrella group of Canadian labour and civil society organizations says Canada’s recognition of Venezuela’s opposition leader Juan Guaido as the country’s interim president will only lead to more internal conflict and polarization, and sets in motion a diplomatic showdown between Caracas and Ottawa.”

An umbrella group of Canadian labour and civil society organizations says Canada’s recognition of Venezuela’s opposition leader Juan Guaido as the country’s interim president will only lead to more internal conflict and polarization, and sets in motion a diplomatic showdown between Caracas and Ottawa.

Canada joined the United States, the Organization of American States, and ten other Latin American states on Wednesday in recognizing Guaido, Venezuela’s parliamentary speaker, as the country’s interim president and reaffirmed its refusal to recognize the legitimacy of President Nicolas Maduro.

Common Frontiers, which lists among its active participants labour and civil society organizations such as the Canadian Labour Congress (CLS), the Canadian Union of Public Employees (CUPE), Unifor, and The United Church of Canada among others, says it is “deeply concerned” by these actions of the Liberal government.

“This provocative action on the part of Canada is a violation of Venezuela’s sovereignty and democratic norms,” said a statement by Common Frontiers. “They reflect interventionist polices that seek nothing less than regime change in Venezuela.”

Raul Burbano of Common Frontiers said the organization, which sent observers to monitor the Venezuelan presidential election in May of 2018, also took issue with Ottawa’s assertion that the election was a sham.

The Canadian delegation, which was composed of members of Unifor, the Ontario Secondary School Teachers’ Federation, the Canadian Union of Postal Workers, The United Church, Common Frontiers and Rabble.ca, concluded in its final report that the May 20, 2018 elections “were fair, transparent and represented the will of the Venezuelan people.”

However, opposition politicians in Venezuela decried electoral fraud and contested the official results, which showed that Maduro won with nearly 68 per cent of the vote, well ahead of his nearest rival Henri Falcón, who received nearly 21 per cent of votes.

In her statement Freeland said Canada will support Guaido’s commitment to lead Venezuela “to free and fair presidential elections.”

“We reiterate that a resolution of the crisis in Venezuela can only be achieved through the leadership and courage of Venezuelans themselves,” Freeland, who is attending the World Economic Forum in Davos, Switzerland, said in a statement.

“Canadians stand with the people of Venezuela and their desire to restore constitutional democracy and human rights in Venezuela.”

‘A path towards chaos?

Canada has also imposed targeted sanctions against 70 Venezuelan officials and, in collaboration with five other countries in the Americas, referred the situation in Venezuela to the International Criminal Court, she added.

Maduro, however, has received strong support from Russia and China.

A statement by the Russian Ministry of Foreign Affairs said that actions by the United States, Canada and other members of the so-called Lima Group “can only deepen the social divide in Venezuela, aggravate street protests, dramatically destabilise the Venezuelan political community and further escalate the conflict.”

“The deliberate and obviously well-orchestrated creation of dual power and an alternative decision-making centre in Venezuela is a direct path towards chaos and erosion of Venezuelan statehood,” the Russian statement said. “Several people have already died. We firmly condemn those who are pushing Venezuelan society into the abyss of violent civil discord.”

China said on Thursday it opposes outside interference in Venezuela and supports its efforts to protect its independence and stability.

“China supports the efforts made by the Venezuelan government to uphold national sovereignty, independence and stability,” Hua said. “China always upholds the principle of non-interference in other counties’ internal affairs and opposes foreign interference in Venezuela’s affairs.”