Canadian government comes to the defence of Nazi SS and Nazi collaborators: why? 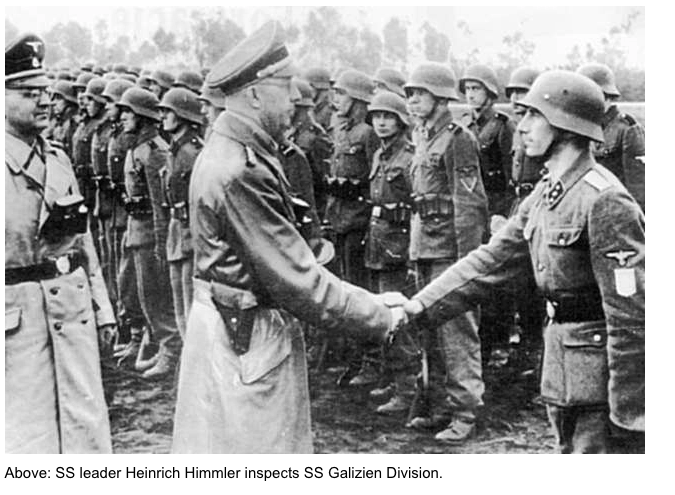 Canada continues to come to the defence of Nazi and SS collaborators, while in the US more than 50 members of Congress condemned the Ukraine government’s ongoing efforts to glorify them. In an important breach of Canadian media silence, the Ottawa Citizen has published David Pugliese’s detailed account

In late April more than 50 members of the U.S. Congress condemned the government of Ukraine’s ongoing efforts to glorify “Nazi collaborators.”

The letter, signed by both Republicans and Democrats, outlined concerns about ongoing ceremonies to glorify leaders of the Ukrainian Insurgent Army as well as 14th SS Galizien Division (aka 1stGalician/Galizien or the 1st Ukrainian Division). “It’s particularly troubling that much of the Nazi glorification in Ukraine is government-supported,” noted the letter to U.S. Deputy Secretary of State John Sullivan. The letter was initiated by Democratic Reps. Ro Khanna of California and David Cicilline of Rhode Island.

Contrast that to how the Canadian government handled a related issue last year when the Russian Embassy in Ottawa tweeted out that, “There are monumets (sic) to Nazi collaborators in Canada and nobody is doing anything about it.”

A monument in Oakville commemorates those who served with the 14th SS Galizien Division. Another monument in Edmonton honors Roman Shukhevych, the leader of the Ukrainian Insurgent Army.

As my Postmedia colleague Marie-Danielle Smith discovered, the Russian tweet sent bureaucrats at Global Affairs Canada into overdrive as they tried to defend the SS unit and Ukrainian Nazi collaborators. Documents she received through the Access to Information law show government officials were under a lot of pressure from the “Centre” (the Privy Council Office and the Prime Minister’s Office) to counter the news about the monuments to Nazi collaborators. The bureaucrats came up with a strategy. The would label the tweet as “disinformation” and they came up with a plan to spread the word to the news media as part of their efforts to defend Ukraine’s Nazi collaborators.

Now as I have written before, the Russians are more than happy to try to embarrass the Canadian government, which has steadfastly stood behind the Ukrainian government in the ongoing conflict in the region. Suggesting that Canada allows monuments to Nazi collaborators seems to fit that bill.

But in this case the Russian tweets aren’t “fake news” or “disinformation.” They are accurate.

As those members of the U.S. Congress have pointed out, the Ukrainians who served in the SS Galizien Division were indeed Nazi collaborators.

So too was Roman Shukhevych.

Before going to the Ukrainian Insurgent Army, Shukhevych was commander of the Ukrainian battalion called Nachtigall. The men of Nachtigall rounded up Jews in Lviv in June 1941, massacring men, women and children. The Simon Wiesenthal Center estimates that the Nachtigall Battalion, along with their German military counterparts, managed to murder around 4,000 Jews in Lviv. Other historians put the estimate at around 6,000.

Shukhevych was later assigned to a new unit whose role in Germany’s war, according to one Holocaust expert, was “fighting partisans and killing Jews.” Shukhevych later turned against the Nazis.

Then there is the SS Galizien Division. They were eager Nazi collaborators. Some 80,000 Ukrainians volunteered to join the SS but only those who could meet the strict requirements were selected.

The SS used some of its most seasoned killers to oversee the development of its new division. SS Gen. Jurgen Stroop, who would later be executed as a war criminal for his brutal destruction of the Jews in the Warsaw Ghetto, was brought on as an advisor.

Other commanders of the division were all versed in the murder of Jews throughout occupied territories in eastern Europe. “Many of the Ukrainian officers, like SS- Haupsturmfuhrer Michael Brygidryr, had previously served in SS Schuma battalions, routinely used to kill partisans, burn down villages and, when the opportunity arose, murder Jews,” wrote award-winning author Christopher Hale in his 2011 ground-breaking book, Hitler’s Foreign Executioners.

In this July 21, 2013 photo, Yevhen Kutsik, 86, a former member of SS Galizien Division, is shown laying a wreath at a monument to SS Galizien. He is accompanied (left) by a young Ukrainian nationalist wearing a white pride T-Shirt. Associated Press photo.

SS Galizien Division was used by the Nazis in a variety of operations, one of the most controversial being the 1944 destruction of the village of Huta Pieniacka. Huta Pieniacka was considered a “Polish” village that just months before had been the shelter for several hundred Jews, Hale noted. The SS units surrounded the village. Men, women and children, who had taken refuge in the village church, were taken outside in groups and murdered. Kids were executed in front of their parents, their heads smashed against tree trunks, one witness testified. Others were burned alive in houses. Around 850 people were murdered.

Some Ukrainians dispute that the SS Galizien Division took part in the killings or they argue that only small elements from the unit – and under Nazi command – were involved.

A Ukrainian military board heard testimony in 1944 that members of the Galizien Division did take part in the attack. But that action was justified, the board was told since the inhabitants of Huta Pieniacka had been killing Ukrainian peasants. “By the way, the Jews were hiding in the village,” a Ukrainian officer added in his testimony describing the destruction of the village inhabitants.

Some Ukrainians see Shukhevych and SS Galizien Division members as heroes. They argue that those individuals served the Nazis because they saw them as liberators from the Russians. Their ultimate goal was an independent Ukraine.

But to claim that these individuals were not Nazi collaborators is something else. They served Hitler.

In May 1944, SS leader Heinrich Himmler addressed the Ukrainian SS recruits in a speech.  “Your homeland has become more beautiful since you have lost – on our initiative, I must say – the residents who were so often a dirty blemish on Galicia’s good name – namely the Jews,” said Himmler. “I know that if I ordered you to liquidate the Poles, I would be giving you permission to do what you are eager to do anyway.”

Himmler speech was greeted with cheers from the Ukrainian recruits.

Equally disturbing are the details contained in the book, The Holocaust Chronicle, published in 2003 and written by 7 top scholars in the field of Holocaust studies. They noted that Ukrainian SS were also sent to help kill Jews during the Warsaw Ghetto uprising. The Chronicle published a photo of two of Ukrainian SS members standing over the bodies of Jews murdered during that uprising. See the photo below:

But this issue of Ukrainian collaboration with the Nazis is not new. Since 1986 the Nazi-hunters with The Simon Wiesenthal Center have warned about efforts from those in Ukraine and in the Ukrainian community in Canada who want to deny involvement of the SS Galizien Division with the Nazis.

The Latvian government is also trying to use the “fake news” label to whitewash the reality of Latvian collaboration with the Nazis.

My colleague Scott Taylor has recently written several articles about the Latvian Legion (15th Waffen Grenadier Division of the SS (1st Latvian) et al) and Latvian killers like war criminal Herberts Cukurs as well as the members of the Arajs Kommando, who murdered an estimated 26,000 Jews.

According to Karlis Eihenbaums, Latvia’s Ambassador to Canada, Taylor is spreading “fake news” and “disinformation.” Eihenbaums has also tried to smear Taylor by suggesting that he is under the “influence” of the Russian government.

Taylor’s research into the Latvian SS Legion and the Latvian murderers of Jewish men, women and children is solid.  It is a well-documented historical fact that many of the killers from the Arajs Kommando went to the Latvian Legion. These Latvians served Hitler. No number of claims of “fake news” can change that fact.

The controversy over the Latvian Legion and the annual parade held in Riga to celebrate these Nazi collaborators is well known and has been going on for two decades, long before the term “fake news” was even coined. In 1998 the parade caused a storm of protests around the world, particularly in Israel, where Holocaust survivors couldn’t understand Latvia’s desire to celebrate such ruthless killers. German Chancellor Helmut Kohl and French President Jacques Chirac were among those that year to protest the Latvian parade. The Times of Israel reported on this year’s Latvian SS parade in Riga, which took place mid-March.

So much for “fake news.” Did Helmut Kohl and Jacques Chirac spread “disinformation” when they denounced the SS parade in Latvia? Of course not.

This whole issue isn’t about “fake news” or Russian “disinformation.” It is about nations trying to whitewash their Nazi collaboration and rewrite history, while attacking journalists who don’t want to let that happen.

But in Canada, the federal government is more than happy to play along with defending Himmler’s SS divisions and Nazi collaborators.

What would our soldiers who fought during the Second World War to help rid the world of this scourge think about that?