‘NATO has begun preparations for escalating from the Cold War into a hot one’ says former Soviet Union leader Mikhail Gorbachev.

As tensions increase with Russia, the Canadian military is pulling anti-tank missiles out of storage and will start distributing them to troops next year. 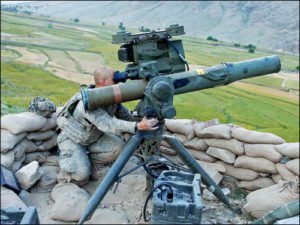 The Canadian Army had sold off most of its tube launched optically sighted wire guided (TOW) missiles and mothballed a few of the anti-tank weapons, assuming they would not be needed in the future. But with Canada now stationing troops on Russia’s borders, soldiers will require the weapons to counter the Kremlin’s robust armoured forces, military sources say.

Brig.-Gen. Derek Macaulay, chief of staff for army strategy, confirmed the service is re-introducing the tripod-mounted missile system to all regular force infantry battalions. “Each battalion will receive its complement of systems with all systems being fielded and deployable by summer 2017,” Macaulay said in a statement to the Ottawa Citizen. “We are not purchasing new systems at this time, but rather re-introducing what we had placed into preservation.”

The TOW missiles are designed to destroy armoured vehicles. Although the army has other weapons to deal with such targets, the TOW system is considered among the most effective. Its missile has a range of about 3,700 metres.

Courses for training troops on using the TOW system are now underway at Canadian Forces Base Gagetown in New Brunswick the army noted.

Macaulay denied the move was related to the increase in tensions with Russia. The re-introduction of the weapons is “not in response to any external influence” but instead a decision to deal with a gap in a capability that is fundamental to how the army operates, he said.

It is not clear why such missiles were removed from service in the first place if they are so critical to how the army operates. But the initiative comes as Canada and NATO turn up the heat militarily on Russia, prompting some observers to point out the West has started a new Cold War with the Kremlin. NATO is establishing a more permanent and extensive troop presence on Russia’s borders and is sending thousands of soldiers to the region.

Canada recently announced it would deploy about 450 soldiers to Latvia as part of those efforts. It will also keep a warship in the region and contribute fighter jets at different times to the NATO mission. 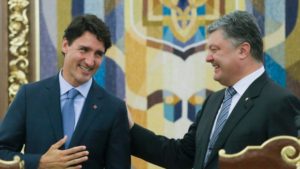 Peggy Mason, a former security adviser to the Mulroney government, says the moves by the Liberals are further provoking an already tense situation. “What we’re seeing is Justin Trudeau and his government continuing with the most disagreeable aspects of Stephen Harper’s foreign policy,” said Mason, president of the Rideau Institute in Ottawa. “People didn’t vote for that. They voted for change.”

At the same time, the Liberal government has appeared to have turned its back on talks with Russia, she added.

Chris Westdal, a former Canadian diplomat who was ambassador in both Russia and Ukraine, has said six months into his mandate, Global Affairs Minister Stéphane Dion has not yet met his Russian counterpart.

The West has taken a hard line against Russia, prompted by Russian leader Vladimir Putin’s decision in 2014 to annex [sic] Crimea, once part of Ukraine. The Russians claim they acted to protect the predominately Russian-speaking population there. Western nations have also denounced Russia’s military support for separatists [sic] in eastern Ukraine.

As a result, Western nations, including Canada, brought in economic sanctions against Russia as well as increasing their military presence in the region. But those actions have only backfired, instead shoring up support for Putin among the Russian people who see NATO as closing in on their country’s borders, Mason argues.

Mikhail Gorbachev, the former Soviet leader who helped end the Cold War and who has been of critical of Putin, recently accused NATO of preparing for offensive operations against his country. “NATO has begun preparations for escalating from the Cold War into a hot one,” he said. “All the rhetoric just yells of a desire almost to declare war on Russia.”

Selected comments by readers posted to The National Post:

*  Really don’t understand this government and what direction it is headed in. It seems to be all over the place, with no real plan for anything. It all seems so out of touch with the liberals campaign promises. Really, WTF is going on? We knew he had a visit from big Barry and suddenly our little sunny ways and hugs PM turns into Dirty Harry. This must be a terrible shock, realization for the die hard liberal backers. No plan and it shows.

*  It’s not confusing at all. The Liberals talk left-center to squash the NDP, but once in power their actions are neocon. Every f***ing time.

*  Madness, absolute madness! Putting our troops, armed with anti tank missiles, on the Russian border can only be seen by the Russians as a provocative action designed to goad Russia into a similar action. That is what the military / industrial complex wants. Business will improve!

Russia will do whatever they feel is necessary to protect their interests in that region. No matter. There is not going to be a “classic war”. That is not to say that Eastern Ukraine will not move itself in under the Russian umbrella. If that happens there will be some huffing and puffing but no European leader is going to authorize classical military action in that region to prevent part or, for that matter, all of the Ukraine from realigning itself with Russia!

The European leaders all know that this is not a “third world” uprising. If insanity prevails then the full force of Russian air power would come into play. No Western nation has the stomach for that over the matter of who the Ukrainians are to be aligned with. In fact, it is none of their business and certainly none of our business.

* So exactly why are we trying to start WW3 with Russia while supporting a confirmed Neo-nazi regime in Ukraine? Oh right, because Putin put his foot down on the attempted invasion of Syria back in 2013 and since then he’s become the new ‘Dr. Evil’. The UN and NATO are the exact reasons why we don’t need their global government. These pyschos are pushing for the end of humanity instead of trying to find a peaceful middle ground. I am truly ashamed to be Canadian and on the losing side of history.

* Good luck with those TOW missiles if they are ever used against Russian T-90 tanks. The U.S., through Saudi Arabia, has been supplying TOW’s to Syrian terrorists, who had caused significant losses to Syrian Army tanks. [Reuters, Nov 25, 2016] Since about a year now, the Russians have been supplying the Syrians with laser jammers for their tanks that deflect TOW’s with significant positive results, which partly accounts for Syrian army advances (unreported by the MSM press) against Al-Qaida. [News report with video on reported Russian tank capacity to repel TOW missiles, here.]

* We have no f***ing business on Russian borders.