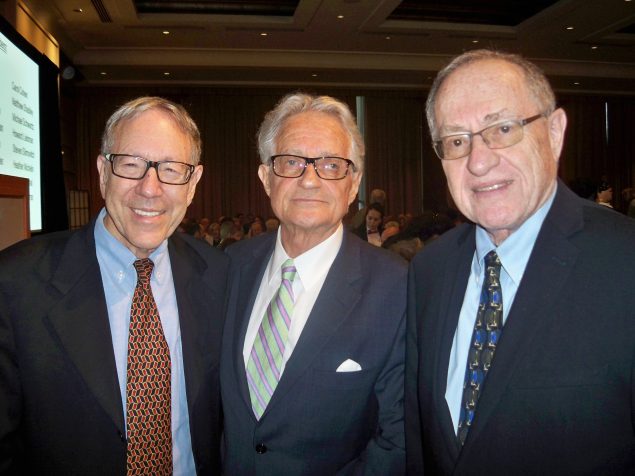 Despite having devoted much of his life to defending Israeli violence and recently promoting war on Iran and regime change in Venezuela, former prime minister Paul Martin has nominated Irwin Cotler for the Nobel Peace Prize.

Hypocrisy, lying, disdain for the victims of ‘our’ policies and other forms of rot run deep in Canadian political culture.

The latest example is former prime minister Paul Martin nominating Irwin Cotler for the Nobel Peace Prize, which has been applauded by the likes of Bernie Farber, Michael Levitt and Anthony Housefather.

This supposed promoter of peace and former Liberal justice minister has devoted much of his life to defending Israeli violence and has recently promoted war on Iran and regime change in Venezuela.

In a story titled “Irwin Cotler’s  daughter running with Ya’alon, Gantz” the Jerusalem Post recently reported that Michal Cotler-Wunsh was part of the Israel Resilience and Telem joint election list. The story revealed that Irwin Cotler has been an unofficial adviser to Moshe Ya’alon for years. Former Chief of Staff of the Israeli military and defence minister between 2013 and 2016, Ya’alon recently boasted about his role in setting up the West Bank colony of Leshem and said Israel “has a right to every part of the Land of Israel.” In 2002 Ya’alon told Haaretz, “the Palestinian  threat harbors cancer-like attributes that have to be severed. There are all kinds of solutions to cancer. Some say it’s necessary to amputate organs but at the moment I am applying chemotherapy.”

Ya’alon’s Telem party is in a formal electoral alliance with Israel Resilience, which is led by Benny Gantz, a former Israeli army chief. To launch his party’s campaign, Gantz released a video boasting about his role in the killing of 2,200 Palestinians in Gaza in the summer of 2014. It actually notes that “parts of Gaza were sent back to the Stone Age.” Gantz faces a war crimes case in the Netherlands for his role in the deaths of civilians in Gaza.

Cotler has described illegal Israeli colonies in the West Bank as “disputed territories” and the Canadian lawyer justified Israel’s 2006 war on Lebanon that left 1,200 dead. He savagely attacked  Richard Goldstone after the South African judge led a UN investigation of Israeli war crimes during operation Cast Lead, which left 1,400 dead in Gaza in 2008–09. Cotler called for the removal of Richard Falk as UN special rapporteur on human rights in the Palestinian territories and William Schabas from his position on the UN Human Rights Council’s International Commission of Inquiry into the killings in Gaza in 2014. Alongside attacking these three (Jewish) lawyers tasked with investigating human rights violations, Cotler promotes the notion of the “new anti-Semitism” to attack critics of Israeli policy.

In an indication of the unquestioning depths of his support for Israeli crimes, Cotler has repeatedly criticized his own party and government’s (mild) expressions of support for Palestinian rights. In May Cotler tweeted his “regret [of a] Canadian Government statement” criticizing Israeli snipers for shooting thousands of peaceful protesters, including Canadian doctor Tarek Loubani, in Gaza. In 2000 Cotler complained when the government he was a part of voted for a UN Security Council resolution calling on Israel to respect the rights of Palestinian protesters. “This kind of resolution, which singled out Israel for discriminatory and differential treatment and appeared to exonerate the Palestinians for their violence,” Cotler said, “would tend to encourage those who violently oppose the peace process as well as those who still seek the destruction of Israel.”

In 2002 a half dozen activists in Montréal occupied Cotler’s office to protest the self-described ‘human rights lawyer’s’ hostility to Palestinians. Cotler’s wife, Ariela Zeevi, was a“close confidant” of Likud founder Menachem Begin when the arch anti-Palestinian party was established to counter Labour’s dominance of Israeli politics.

‘Canada’s Alan Dershowitz’ has also attacked Iran incessantly. He supported the Stephen Harper government’s move to break off diplomatic relations with Tehran in 2012 and pushed to remove the MEK, which is responsible for thousands of Iranian deaths, from Canada’s terrorist list. As a member of the advisory board of “United Against Nuclear Iran”, Cotler opposed the P5+1Iran Nuclear Agreement. Recently, he called for Canada to invoke the Magnitsky Act to “impose sanctions in the form of travel bans and asset freezes” on Iranian officials.

As well as promoting US/Israel propaganda about Iran, Cotler criticized Hugo Chavez’s government since at least 2009 when Venezuela broke off diplomatic relations with Israel in response to killings in Gaza. In recent weeks Cotler has disparaged Venezuela’s government in a number of articles, including a National Post story headlined “Canadian unions helped fund delegation that gave glowing review of Venezuela election widely seen as illegitimate.” Cotler was quoted saying, “the notion that free and fair elections could possibly be taking place when you not only criminalize those who are on the opposition … but when you don’t have any allowance for expressions of freedom of speech, assembly, association and the like, simply is a non-sequitur.” But, as Dave Parnas wrote in response, “for two weeks we have been seeing pictures of streets filled with people who assembled, associated and spoke freely against President Nicolás Maduro.”

Cotler pushed for Canada to request the International Criminal Court investigate Venezuela’s government. Cotler was one of three “international experts” responsible for a 400-page Canadian-backed Organization of American States (OAS) report on rights violations in Venezuela that recommended referring Venezuela to the ICC. At a press conference in May to release the report, Cotler said Venezuela’s “government itself was responsible for the worst ever humanitarian crisis in the region.” As this author wrote at the time: “Worse than the extermination of the Taíno and Arawak by the Spanish? Or the enslavement of five million Africans in Brazil? Or the 200,000 Mayans killed in Guatemala? Or the thousands of state-murdered ‘subversives’ in Chile, Argentina, Uruguay, Brazil?”

For four years Cotler has been working with Juan Guaidó’s “ultra right wing” Voluntad Popular party to oust Nicolas Maduro’s government. In May 2017 Cotler helped bring Lilian Tintori, wife of Voluntad Popular leader Leopoldo López, to meet the Prime Minister and opposition leaders. The Guardian recently reported on Tintori’s role in building international support for the slow-motion coup attempt currently underway in Venezuela. Tintori acted as an emissary for Lopez who couldn’t travel to Ottawa because he was convicted of inciting violence during the deadly “guarimbas” protests  in 2014. A series of news outlets have reported that Lopez is the key Venezuelan organizer in the plan to anoint Guaidó interim president.

Cotler joined Lopez’s legal team in early 2015. At that time the Venezuelan and international media repeated the widely promulgated description of Cotler as Nelson Mandela’s former lawyer (a Reuters headline noted, “Former Mandela lawyer to join defence of Venezuela’s jailed activist”). In response, South Africa’s Ambassador to Venezuela, Pandit Thaninga Shope-Linney, said, “Irwin Cotler was not Nelson Mandela’s lawyer.” For his part, Nelson Mandela mentions a number of lawyers (he was one) in his biography but Cotler’s name seems absent.

Cotler’s human rights credentials are a sham. He is a vicious anti-Palestinian who aggressively criticizes enemy states such as Venezuela, China, Russia and Iran while largely ignoring rights violations committed by Canada and the US.

For those appalled by the idea of Cotler receiving the Nobel Peace Prize Iranian-Canadian activist Mehdi Samadian has created a petition titled “Irwin Cotler does not deserve nomination for Nobel Peace Prize”.