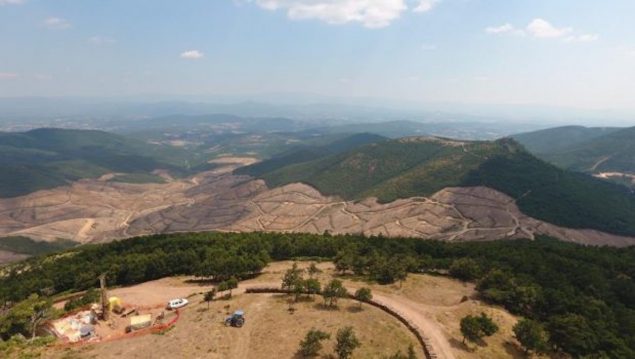 Turkey’s historic Mount Ida – the setting for so many stories and myths from ancient times – is now being destroyed by a Canadian gold mining company.

Just 20 km from the site of ancient Troy and 30 km from Çanakkale [Gallipoli], Anatolia’s Kaz Dağları [Goose Mountains] are steeped in ancient as well as modern history. Also known as Mount Ida, they are the setting for many stories from Ancient Greek times: including the Iliad by Homer and the Aeneid of Virgil. With a rural population scattered among small villages, the region has a wealth of endemic flora, left behind after the Ice Age.

But the region is also rich with minerals and natural resources, and these are being plundered by foreign and domestic companies alike, leaving vast swathes bare lifeless soil and the once majestic mountain a scene of toxic devastation.

The most recent carnage is being wreaked by Doğu Biga, a Turkish company overseeing the project on behalf of Canadian company, Alamos Gold. they have already felled almost 200,000 trees – four times more than the number approved by the Environmental Impact Assessment report. It is now clear that the ruling Turkish party AKP, the MHP and legal authorities are blocking any opportunity to investigate what is obviously an environmental disaster on a massive scale, and it’s causing an uproar.

Canada-based intermediate gold producer Alamos Gold is wreaking havoc in Turkey’s Kirazlı village in the northwestern province of Çanakkale as it prepares for the construction of a gold and silver mine, wrote news site Artı Gerçek columnist, Pelin Cengiz.

According to Cengiz, more than 195,00 trees have been felled, four times the amount indicated in the environmental impact assessment report approved by the ministry (ÇED) to make way for the Alamos project consisting of 1,541 hectares of mineral tenure in the Kaz Mountains of Turkey.

The article also reported that 20,000 tonnes of cyanide will be used and the water resources of 24 villages face contamination in the project that is located only 30 kilometres to central Çanakkale.

Numerous civil-rights organisations have [protested] against the mine; however, a motion to investigate the construction of the mine carried to parliament by 26 deputies from Turkey’s main opposition Republican People’s Party (CHP) was voted down by the ruling Justice and Development Party (AKP) and ally Nationalist Movement Party (MHP).

Doğu Biga, the Turkish company overseeing the project, received permission to begin construction for the project in March 2019 from the Ministry of Energy and Natural Resources. Cengiz wrote, quoting İDA, a Çanakkale organisation fighting environment destruction, as saying the subject matter expert (SME) investigation on the project was not done in accordance with the law and the experts from the region were not consulted.

“The administrative court accepted its own the SME report and did not pay attention to the objections being made on the project,’’ the İDA report went on to say.

Despite Alamos’ claims of sustainable development and social responsibility, “The Kaz mountains, forests, water resources, living beings and an entire ecosystem are being killed in Çanakkale,’’ Cengiz wrote, and in broad daylight before everyone’s eyes.

TEMA, the Turkish Foundation for Combating Soil Erosion for Reforestation and the Protection of Natural Habitats has started a petition to stop the mining operations and has already received over 100,000 signatures so far.