Canada’s next target after Venezuela: Cuba? 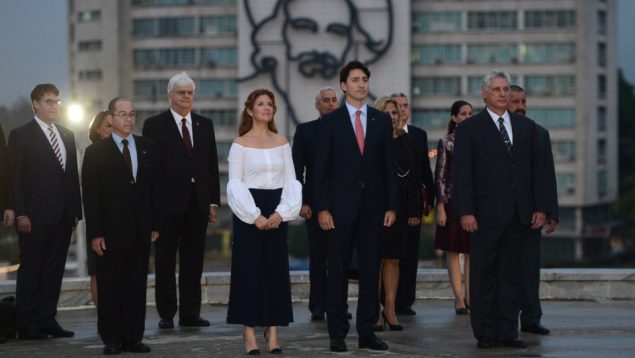 The Justin Trudeau government is supposed to have good relations with Havana, so why has it played a central role in the US-led bid to oust Maduro?

“First we take Caracas then we take Havana.”

That’s the thinking driving the Donald Trump administration’s policy towards Venezuela, according to a Wall Street Journal story titled “U.S. Push to Oust Venezuela’s Maduro Marks First Shot in Plan to Reshape Latin America.” Adding credence to this thesis, on Monday US Secretary of State Mike Pompeo told reporters that “Cuba is the true imperialist power in Venezuela.”

Despite Washington’s hope that toppling President Nicolás Maduro could hasten the fall of Cuba’s government, the Justin Trudeau government, which is supposed to have good relations with Havana, has played a central role in the US-led bid to oust Maduro. It has also echoed some of the Trump administration’s attacks on Cuba’s role in Venezuela. Why would a ‘friend’ of Cuba do this?

While much is made of Ottawa’s seemingly cordial relations with Havana, the reality is more complicated than often presented, as I detail here. Most significantly, Canada has repeatedly aligned with US fear-mongering about the “Cuban menace” in the region.

Just days after the April 1961 CIA-backed Bay of Pigs invasion, Prime Minister John Diefenbaker claimed the Cuban government was a threat to the security of the hemisphere and “a dictatorship  which is abhorrent to free men everywhere.” Two years later Ottawa’s representative to a NATO ministerial meeting was tasked with saying, “the Canadian government, of course, holds no sympathy for the present dictatorial regime in Cuba …. We remain deeply disturbed by the presence in the Western Hemisphere of a communist regime aligned with the Soviet Union and by the transformation of Cuba into an area which still retains a potential for disturbing East-West relations and the stability of the Hemisphere.”

Canada backed the US-led Alliance for Progress, which was the John F. Kennedy administration’s response to the excitement created in Latin America by the 1959 Cuban revolution. Ottawa began delivering aid to the newly independent Commonwealth Caribbean partly to counter Cuba’s appeal. In the early 1960s External Affairs officials, notes Canadian Gunboat Diplomacy: The Canadian Navy and Foreign Policy, “singled out Cuban revolutionary activity as the main threat to political and thus economic stability in the region and implied that developmental aid staved off Cuban interference.”

In 1963, that book notes, HMCS Saskatchewan was deployed to Haiti largely to guarantee that François Duvalier did not make any moves towards Cuba and that a Cuban-inspired guerilla movement did not seize power. Three years later two Canadian gunboats were deployed to Barbados’ independence celebration in a bizarre diplomatic maneuver designed to demonstrate Canada’s military prowess and to send a ‘signal’ to Havana. Canadian Gunboat Diplomacy explains, “we can only speculate at who the “signal” was directed towards, but given the fact that tensions were running high in the Caribbean over the Dominican Republic Affair [1965 US invasion], it is likely that the targets were any outside force, probably Cuban, which might be tempted to interfere with Barbadian independence.”

When 7,000 US troops invaded Grenada in 1983 to reassert US hegemony in a country supposedly overrun by Cuban doctors, Canadian officials criticized Grenada’s government and abstained on a UN resolution calling for the withdrawal of all foreign troops (predominantly American) from that country.The next year Canadian ambassador to Panama, Francis Filleul, complained that “Nicaragua has been penetrated so badly by Cuba and other [eastern bloc] countries that it is destabilizing. It was not that the people of Nicaragua … chose to welcome the Russians and the Cubans. It was that the FSLN [Sandinistas] had gained control of the revolutionary movement and that was their policy.” As with the US Caribbean Basin Initiative, the 1986 Caribbean-Canada Trade Agreement (CARIBCAN) sought to isolate Cuba from the region.

According to a 2006 cable released by Wikileaks headlined “Canada’s new government: opportunities and challenges”, the US embassy in Ottawa pushed the Stephen Harper government to begin “engaging more actively in other hemispheric trouble spots such as Venezuela, Colombia, and Cuba.” In the spring of 2008 the Canadian embassy in Panama teamed up with the US National Endowment for Democracy to organize a meeting for prominent members of the opposition in Cuba, Ecuador, Bolivia and Venezuela to respond to the “new era of populism and authoritarianism in Latin America.” In 2012 Canada was alone with the US in opposing Cuba’s participation in the Summit of the Americas.

While purportedly sympathetic to Cuba, Justin Trudeau’s government has criticized Cuba’s actions in Venezuela. In a recent article titled “Canada  at odds with Cuban ‘ally’ over Maduro’s fate” Foreign Affairs Minister Chrystia Freeland told CBC that Cuba’s role in Venezuela is “concerning” and that“we have heard directly from the Venezuelan opposition that they’re concerned by the role that some Cubans are playing in their country.” The article, written by extreme Canadian officialdom sycophant Evan Dyer, quoted an opposition group claiming thousands of Cuban agents “direct centres of torture in Venezuela.”

Compared to Washington, Ottawa has had cordial relations with Havana since the Cuban revolution. Still, Canada has generally sided with US fear mongering about the “Cuban menace”, which is propaganda largely designed to justify keeping the region subservient to western capitalist domination.

Canada won’t change stance on Cuba even with Trump in White House: Trudeau