Canada’s new Parliament and the crisis in Ukraine: Russophobia rules 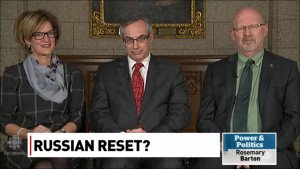 Three peas in a pod: Liberal, Conservative and NDP MPs all sing from the same songbook

The new voters were drawn to the Liberals out of dislike or disgust with the Conservative reign and due to the progressive veneer which the Liberals, Trudeau in particular, were able to give to their election campaign. The Liberal cause was aided by the decision of the strategists of the New Democratic Party to occupy the ‘center’ of the electoral terrain, to the right of the Liberals.

There are changes taking place in federal government policy in Ottawa under the new government. Most are cosmetic, but some are with substance. However, on the subject of foreign policy, including the civil war in Ukraine and the NATO military threats and buildup against Russia, there is not an inkling of change from the policies of the Stephen Harper regime. Canada remains aggressively hostile towards Russia. It is hostile to the aspirations of those people of Ukraine who do not want to see the country become an anti-Russian, ultra-nationalist entity; who do not want the country to become an economic satellite of the United States and the large economic powers of the European Union, as has happened to Greece; and who want the country to recognize the right to political self-determination of its citizens, including full language and cultural rights.

Proof that nothing has changed in foreign policy in Ottawa is provided in a segment yesterday of CBC Television’s Power & Politics program on January 26. Representatives of the Liberal, Conservative and New Democratic parties speak woodenly on a panel, rotely repeating the same hackneyed phrases that have marked official Canadian political discourse on Ukraine for two years. Watch it here and weep.

The same program also broadcast an interview with Russia’s ambassador to Canada, Alexander Darchiev. You can watch Ambassador Darchiev here. The three-party panel, speaking after the ambassador’s comments were broadcast, reacted negatively, nay with hostility and disrespect, to the ambassador’s plea for cooperation and dialogue between Canada and Russia, for pragmatism ahead of ideology.

Foreign Affairs Minister Stephane Dion is travelling to Ukraine this weekend to express Canada’s support for the eastern European country that lost the Crimean Peninsula to Russia in 2014. Dion announced the trip in the House of Commons on Wednesday as he faced a barrage of criticism from Opposition Conservatives about his decision to engage Russia more broadly.

Dion said Canada remains a steadfast friend of Ukraine, but will be open to talking to Russia because it could serve Canada’s needs, including in the Arctic where the two countries have shared interests…