Canada’s new, right-wing and pro-globalization minister of foreign affairs, Chrystia Freeland, is one of 13 pro-Ukraine coup extremists who are banned by the Russian government from travel to Russia as of March 2014. 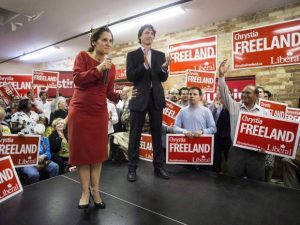 The ban measure nearly three years ago was a retaliatory measure against the decision of the Canadian government then led by Stephen Harper to join economic and political sanctions against Russia and Crimea that were levied by the United States and the European Union.

The U.S. and EU sanctions were enacted in retaliation against the Crimean people for conducting a referendum on March 15, 2014 on whether they wished to end the non-consensual affiliation of Crimea to Ukraine that was imposed by the leaders of the Soviet Union in 1954.

The referendum question asked if the Crimean people wished to secede from Ukraine and join (rejoin) the Russian Federation. It passed overwhelmingly. But rather comically, the NATO and EU countries stand by the 1954 decision of leaders of the Soviet Union.

The anti-Russia, pro-right wing Ukraine sanctions imposed by the Harper government in March 2014 and since then are still supported by all the parties in the Canadian parliament. Also supported unanimously is the Harper government’s 2014 decision, ongoing, to dispatch Canadian soldiers to train the Ukrainian army and extremist paramilitaries waging civil war in the east of the country.

Canada’s elected Parliamentarians unanimously supported the provocative move by the NATO military alliance in 2016 to establish four permanent ‘combat brigades’ along the Russian border in Poland and the Baltic states. Canada is leading the NATO brigade being established in Latvia.

Prime Minister Justin Trudeau was asked on January 10 how Freeland would conduct relations with Russia while banned from travel to there. He said, “As to how she gets along with Russia, well, she speaks fluent Russian.

“We continue to stand strongly with Ukraine and… continue to condemn in no uncertain terms the illegitimate and illegal actions of the Russians in Ukraine, in the Donbass and Crimea.”

Maria Zaharova, spokeswoman for Russia’s Foreign Ministry, told CBC News on January 11 that the original Russian travel sanctions were a “countermeasure” in response to those Canada imposed on Russia. “Withdrawing her from the list is an issue of reciprocity, mirror-like,” Zaharova told CBC, adding that nothing prevents Freeland from meeting with Russian officials outside Russia.

Of the 13 Canadians banned in March 2014, seven were ministers and other elected members of Parliament of the governing Conservatives, two were advisors to Harper and three were opposition MPs–Irwin Cotler and Chrystia Freeland from the Liberal Party and Paul Dewar from the New Democratic Party. (News story here.) The 13th person is Paul Grod, president of the extreme-right Ukrainian Canadian Congress.

The sanctions against Russia stem from the Russian government’s decision to recognize the democratic legitimacy of the Crimea referendum and accept Crimea into the federation. Today, two Crimean entities are affiliated to  the Russian Federation: the Republic of Crimea and the Federal City of Sevastopol. The Russian Federation is divided into 85 republics and other constituents, including three federal cities–Moscow, St. Petersburg and Sevastopol.

Chrystia Freeland has been one of the most vocal extremists in Canada in support of the civil war being waged by the governing regime in eastern Ukraine. At the time of her banning from travel to Russia, she tweeted “Love Russ lang/culture, loved my yrs in Moscow; but it’s an honour to be on Putin’s sanction list, esp in company of friends Cotler & Grod.”

Freeland has written frequent anti-Russia screeds in support of the Ukrainian government. Here are two of them, published not long before she became Canada’s Minister of International Trade following her Liberal Party’s election victory in October 2015:  What does Putin want?, Jan 2015; and, The real fight in Ukraine, July 2015.

As part of the cabinet shuffle which assigned Freeland to foreign affairs, she will retain responsibility for existing trade agreements with  the United States, including the 1994 North American Free Trade Pact.

Freeland was much in the news earlier this year when as minister of international trade, she tried to steer through a Canada-EU ‘free trade’ (unrestricted investment) deal with the countries of the European Union called the Comprehensive Economic and Trade Agreement. The deal initially failed when the Wallonia region of Belgium rejected it, but subsequent arm-twisting  by the EU and the Belgian government against the region saw Wallonia capitulate. The deal now awaits approval by the EU Parliament.

Canada’s capitalist class is worried that the Donald Trump presidency might affect their privileged access to the United States market as well as investment decisions in Canada by U.S. capitalists.  This article in The Globe and Mail analyzes prospects for the auto assembly industry, by far the most important manufacturing industry in the province of Ontario. Some 110,000 workers are directly employed in auto and truck assembly and parts manufacture.

According to the Globe, more than $60-billion (Canadian) worth of cars and trucks assembled in Ontario are sold annually in the U.S.

U.S. and Japanese carmakers have invested disproportionately in manufacture in Ontario for the purpose of export into the U.S. because of the typically low (favorable) exchange rate of the Canadian dollar and because unlike in the United States, a large part of the the health care costs for auto industry employees is covered by Canada’s state-operated health care industry.

But Canada continues to lose place to Mexico. Canada is the tenth largest auto assembly country in the world; Mexico now sits at number seven. Canada’s share of North American vehicle assembly has dropped from 16 per cent in 1993 to 13 per cent in 2016, while Mexico’s share has grown during the same period from eight per cent to 22 per cent (Globe and Mail).

A lengthy article on Chrystia Freeland’s past business and political career was published by Moscow-based writer John Helmer in November 2015 (here). Her meetings with Donald Trump or his billionaire cabinet members should be interesting: in 2012, she published a book titled ‘Plutocrats: The Rise of the New Global Super-Rich and the Fall of Everyone Else’.

Chrystia Freeland has traveled a long way since publication of her 2012 book. She is a vociferous proponent in favour of expanded, unfettered, globalized capitalism, so-called free trade.

Chrystia Freeland and the plutocrats, by Konrad Yakabuski, columnist, Globe and Mail, Jan 11, 2017

This month last year, Chrystia Freeland was with her boss in Davos. The Swiss resort and site of the World Economic Forum, Ms. Freeland once wrote, is where the globe’s plutocrats go to “figure out their party line.” The onetime chronicler of the superrich had always seemed unusually at ease among the 0.1 per cent she claimed to criticize. By last year, as a key player in Prime Minister Justin Trudeau’s new cabinet, she seemed utterly in her element among them.

After the event, Ms. Freeland posted photos on her website of her with George Soros and Richard Branson…