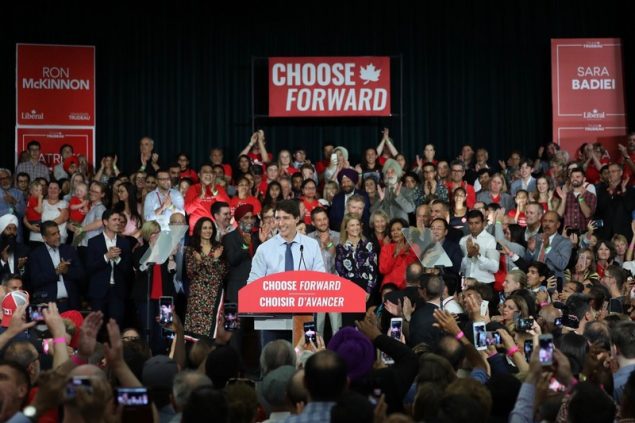 Canadians will be going to the polls on October 21 and the political parties are already at the hustings. However, when it comes to the country’s main parties, voters looking to cast their ballot in support of Palestinian rights will be out of luck.

Canadian political parties have launched their campaigns for the country’s 21 October general election.

But voters looking to cast a ballot in support of Palestinian rights will be out of luck when it comes to the main parties – Prime Minister Justin Trudeau’s Liberals, and the main opposition Conservatives.

Canadians for Justice and Peace in the Middle East has published a voters guide grading party positions on Palestine and other regional issues.

The 2019 Federal Election has been called! Wondering how to vote? Take a look at our Elections Guide: https://t.co/ezJucptKQ7 #cdnpoli #Elections2019 pic.twitter.com/qTWvchD8jU

The Conservatives come out worst, with an F overall and failing grades in 10 out of 13 policy areas.

CJPME gives the centrist New Democratic Party an A-, the best overall grade, while the Greens get a B+.

The Liberals manage a C- overall, but get an F for their position on BDS – the boycott, divestment and sanctions movement for Palestinian rights.

The Liberal Party also gets an F on the recently renewed Canada-Israel Free Trade Agreement.

The highest grade achieved by the Liberals is a B+, for its position on aid to Palestinian refugees.

But Trudeau’s party gets C grades for its response to Israel’s killing of unarmed protesters in Gaza and Israel’s incarceration of Palestinian children.

The Liberals also score lowly D grades for their positions on the war in Yemen, and human rights abuses by Egypt’s military regime and the Saudi monarchy.

At a televised leaders’ debate on Thursday night, Conservative leader Andrew Scheer demonstrated why his party got failing grades on Palestinian rights:

Look at @AndrewScheer’s smug face as he promises to pull funding from Palestinian refugees, while citing racist and dehumanizing anti-Palestinian tropes. This needs to be acknowledged for the racism that it is. #cdnpoli pic.twitter.com/4Oe6Ykw78K

According to Canadians for Justice and Peace in the Middle East, “no Canadian political party fully supports BDS, although the reaction and tone vis-à-vis the movement varies somewhat amongst the parties.”

The group says the Liberal and Conservative positions “are the most extreme, falsely equating the BDS movement to a form of anti-Semitism, and condemning Canadians who support nonviolent pressure tactics against Israel.”

CJPME awards the Greens “the highest mark, despite not explicitly endorsing the BDS movement.”

The Greens do however “support boycotts, divestment and sanctions against Israel until it respects international law.”

Individual New Democratic Party lawmakers, including leader Jagmeet Singh, “have expressed their willingness to consider economic sanctions against Israel,” according to CJPME.

But the NDP as a party “has rejected any type of BDS-related action.”

The Quebec nationalist Bloc Québecois has not taken an explicit position on BDS. But CJPME says that it was able to find BQ statements “supporting the objectives of the BDS movement.”

On the eve of the campaign, the Trudeau government announced it was appealing a court decision barring the sale of wines from Israeli settlements in the occupied West Bank labeled as “Made in Israel.”

The Liberal Party also dropped a parliamentary candidate in Quebec after an Israel lobby group smeared him as an anti-Semite because he criticized Israel.

Meanwhile, despite their relatively favorable score, the Greens have come in for strong criticism from the party’s former justice spokesperson.

In 2016 Dimitri Lascaris was fired from that position by Green Party leader Elizabeth May after he signed on to an article supporting BDS.

On Thursday, Lascaris excoriated the Greens after one of their candidates issued an apology for past comments critical of Israel.

“Elizabeth May is perfectly fine with candidates and MPs exercising freedom of conscience – except when their conscience dictates that they call for Israel to be held accountable for its heinous crimes,” he added.

Yet another candidate in Canada’s election issues a pathetic apology for condemning #Israel’s appalling human rights abuses. This time, it’s @canadadiangreens’ candidate @daledewar. We need candidates who will stand up to such pressure, not succumb to it: https://t.co/vhc7uJXzmC

Yes, @elizabethmay is perfectly fine with candidates and MPs exercising freedom of conscience – except when their conscience dictates that they call for Israel to be held accountable for its heinous crimes.#cdnpoli #humanrights #Palestine https://t.co/DU5W0AuX1A

In 2015, the Liberals regained power from the Conservatives in a landslide.

But Trudeau’s scandal-hit government is facing a tough battle to retain its parliamentary majority.

Opinion polls currently put the Liberals and Conservatives neck and neck at about 34 percent each. The NDP is at about 13 percent and the Greens – who are hoping for a breakthrough – are at 11 percent.