Canada’s leadership on Venezuela is misguided, misdirected – and a mistake 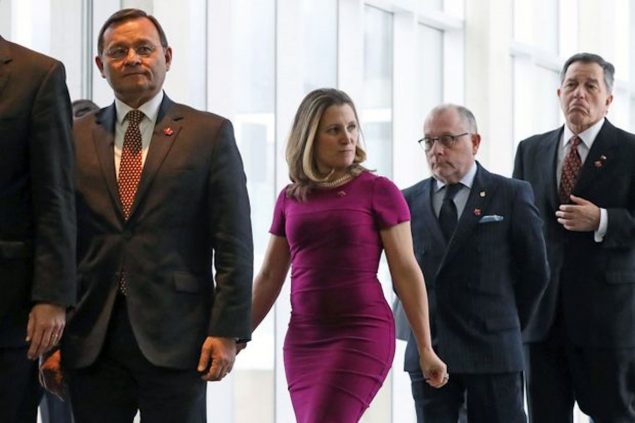 Could there finally be a breach in Canada’s very own wall – of silence?

This article from Canada’s Globe and Mail is a first for the country’s MSM as far as we are aware… Since the beginning of the US/Canada led coup attempt on Venezuela, Canada’s main stream media has remained deafeningly silent – for the most part  – other than to repeat ad nauseam negative propaganda about Venezuela and frequently spiteful falsehoods relating to President Nicolas Maduro. It is therefore refreshing to see an article in a Canadian publication in which it clearly states that Canada’s leadership is wrong. In this respect – at least – we should take our hats off to Professors John Kirk and Stephen Kimber.

By John Kirk and Stephen Kimber

Venezuela is in a deep political and economic crisis. Three million people have fled the country. The oil industry, which is the source of 90 per cent of the national economy, is in free fall. The most recent elections, in which Nicolas Maduro reclaimed the presidency, were clearly deficient.

So, on Monday, Ottawa hosted the Lima Group, a 14-country body whose primary goal is Venezuelan regime change, to help lead the way to a solution. To achieve those ends, Canada has encouraged and engineered the self-ascension of Juan Guaido, whose claim to the interim presidency has been supported by that bloc.

Given the crisis in Venezuela, this attempt at “democracy promotion,” as Foreign Affairs Minister Chrystia Freeland calls it, may seem admirable. But it has little to do with democracy, and more to do with installing a government more to our liking – and may lead to violence, or even civil war.

The actual situation in Venezuela is more complicated than the headlines suggest. In 2018, despite escalating crises – and even accounting for electoral irregularities and an opposition boycott – 5.8 million Venezuelans still voted for Mr. Maduro. So he is not completely without popular support. He also still has the backing of the country’s powerful army.

Mr. Guaido, a heretofore little-known legislator who was elected only in his own district, also offers no guarantee of stability. The only salient detail for Ottawa in support of his claim is that he has the support of a majority of the 164-member national assembly, which elected him its president.

Meanwhile, some Lima Group members are being willfully hypocritical in their moralizing. Guatemala’s President, Jimmy Morales, dismantled a United Nations anti-corruption group and barred its head from entering the country. Honduras’s President, Juan Orlando Hernandez, took power in 2014 after a dubious election and violent crackdown on dissent, then ignored his country’s constitution to win re-election in 2017. Brazil’s new President, Jair Bolsonaro, has not only publicly attacked women, gay people, immigrants and people of colour, he has also expressed support for torture and his country’s military dictatorship. Colombia has witnessed the execution of 120 human-rights leaders in the past two years.

Is Ms. Freeland promoting democracy in those countries? And what does it say about Canada that these are our fellow travellers?

And then there is the matter of the self-interested, sabre-rattling United States, which is now hovering over the proceedings. Canada claims to oppose military intervention, but we are being inexorably drawn in to provide cover for exactly that.

Donald Trump’s own rhetoric has made clear that “all options are on the table.” Vice-President Mike Pence declared: “This is no time for dialogue. It is time to end the Maduro regime.” And hawkish national-security adviser John Bolton articulated the ultimate U.S. goal: “It will make a big difference economically if we could have American oil companies invest in and produce the oil capabilities in Venezuela.”

That, in the end, is what this is all about. And Canada has made itself complicit.

For all the talk of “democracy promotion,” the democracy that the Canadian government is really focused on is its own, and the only thing it wants to promote is the Liberal party. This is a Canadian election year, after all, and following the gaffes in India, and amid tensions with the United States, China and Saudi Arabia, this is an opportunity for the Trudeau administration to burnish its image at home as a strong leader on the international stage while also finding a way to show the tariff-slapping Trump administration it’s a good friend that deserves a better deal.

We are right to be concerned about the crisis in Venezuela. But we cannot venture beyond diplomacy to interfere in Venezuela’s internal affairs by endorsing the leadership of an untried young politician. We cannot, whether out of naiveté or something worse, help pave the way for U.S. companies to more easily take over the country with the largest oil reserves in the world, lest Venezuela follow in the tradition of interventions in Libya and Iraq, where “human rights” and “democracy” were also the rallying cry. We cannot ignore that there are better ways to avoid catastrophe in Venezuela, such as the negotiation of a “made-in-Venezuela” solution with countries such as Mexico and Uruguay, with mediation by Pope Francis and a key role for the UN Security Council.