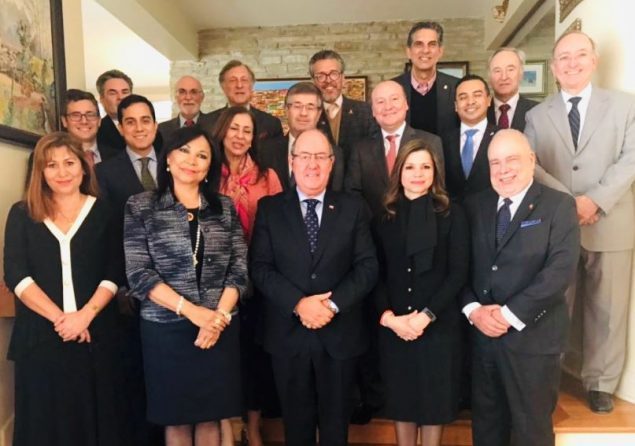 For information only: Canada is calling a meeting of its Lima Group partners on February 20, 2020. Also included in this piece is a passage from a speech given by self-declared Venezuelan president Juan Guaidó’s “ambassador” in Canada, Orlando Viera Blanco. Unlike the Canadian government, we think it’s important to inform our readers, so here is the full text.

Ambassador Orlando Viera-Blanco reported on the meeting held with the Ambassadors to Canada of the Lima Group, Argentina, Brazil, Colombia, Chile, Costa Rica, Ecuador, Haiti, Honduras, Guatemala, Peru, Paraguay and Panama, plus an invitation extended to the Ambassadors of Uruguay, Mexico and the Minister-Counsellor for Political Affairs of the United States and Special Advisor to Venezuela of Canada, in which they evaluated the progress of the recent visit of the Chairman-in-Charge Juan Guaidó and the evolution of the LG.

“We would like to thank the Chilean Ambassador to Canada Alejandro Marisio for his kind invitation to his residence to exchange ideas on the importance of assuming a more forceful narrative against the Caracas regime. A dictatorship where international crime, terrorism and radical groups gravitate that export violence but also hatred and misery to the world. This deserves a more focused response with other international contact groups. That is the task. To press on the accelerator and be creative in the search for effective formulas that will push for the cessation of usurpation and the advancement of the democratic transition in Venezuela,” Viera-Blanco stressed.

“In Venezuela, the world’s largest criminal conspiracy is running rampant. Money laundering, gold smuggling, mineral fuel smuggling, and even human smuggling, piracy, drug trafficking, guerrilla warfare, terrorism, and corruption with impunity. A criminal organization that has kidnapped a noble and innocent people, and has in its project to destabilize an entire hemisphere and the world. Let us not underestimate it. It is time for international law and order to be more forceful and determined in its actions. The days are passing and time is running out. Let us take advantage of the “tailwind” left by the courageous and brilliant international tour of President Juan Guaidó to achieve the desired goal: the rescue of a defenseless people.” These were the words of Ambassador Viera-Blanco to those present.

On February 20th, 2020, a new Summit of Foreign Ministers of the Lima Group is scheduled in Canada, where new actions and joint efforts with Europe and the rest of the world will be announced to provide a solution to the Venezuelan crisis.

When it comes to Venezuela, Canada’s on the wrong side of the coup

An open letter to Justin Trudeau on Venezuela