The following article make reference to the use of cluster weapons by the “ally” of the United States (and Canada)–Ukraine.

By Mike Blanchfield, Canadian Press, published in The Globe and Mail, March 18, 2015

The Harper government has ratified an international treaty to ban deadly cluster bombs, after more than half a decade of controversy. 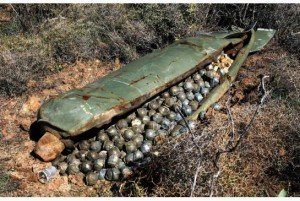 Canada signed the Convention on Cluster Munitions in 2008, but dragged its heels on ratifying it in the face of widespread international complaints, including from the usually neutral International Committee of the Red Cross.

The opposition stemmed from a loophole that would allow the Canadian Forces to be involved in the use of cluster bombs in joint operations with the United States, which has opted out of the convention.

The Conservatives eventually agreed to excise a single word from the bill – “using” – which clearly prohibits Canadian military personnel from directly using the weapons, but doesn’t entirely bar their indirect involvement in combined operations.

Paul Hannon, the executive director of Mines Action Canada, said widespread concern remains over the existing loopholes even though the Canadian Forces have ruled out ever using what is widely seen as an inhumane weapon.

A single cluster bomb contains hundreds of brightly coloured, baseball-size submunitions that often fail to explode and can sit dormant for decades, posing an ongoing hazard to civilians, especially young children in dozens of postwar countries.

Last year, the Forces destroyed their stockpile of the weapons, which the government says Canada never used, as part of its treaty obligations.

Cluster bombs date back to the Second World War, but came into wider use by the United States during its bombing of Vietnam, Cambodia and Laos in the 1960s. They’ve been used by the U.S. and its allies in Iraq and Afghanistan, and most recently surfaced in Syria, Ukraine and Libya.

Mr. Hannon said that although the bill that ratified the international convention still contains “numerous loopholes,” it is clear that Canadians will never use cluster munitions.

The government defended its position based on the larger issues surrounding the need to remain interoperable with its biggest military ally, the United States.

The following comment on this article appears in the Globe and Mail online:
Does this mean that Canada will now condemn any future use of cluster weapons by the government of Ukraine against the citizens of the east of the country? And if Canada is sincerely committed to the international convention against the use of cluster weapons, why did the Canadian government fail to condemn Ukraine’s use of the weapons last year? Why did we hear so little in Canadian media of the reports by Human Rights Watch and New York Times last October verifying Ukraine’s use of the weapon? The Special Monitoring Mission to Ukraine of the OSCE issued a verification of more recent use of the weapons, in its daily report of Feb 3, 2015.