Canada must not suppress free speech on Israel 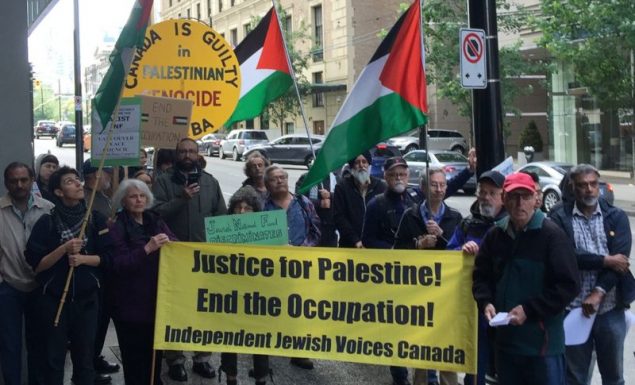 Independent Jewish Voices Canada has rallied for Palestinian rights and challenged the IHRA definition of anti-Semitism which threatens the speech rights of advocates for Palestinian freedom. The Marxist-Leninist Daily

A founding member of Independent Jewish Voices Canada, Sid Shniad says that international public opinion about Israel is shifting, due to its behaviour towards Palestine.

International public opinion about Israel is shifting. While it was once widely seen through the dominant, Zionist lens as a plucky, heroic little country that made the desert bloom, reality has increasingly forced a change in this perspective.

Driving this change has been the arrogant, aggressive behavior of Israel and its treatment of Palestinians: the endless spread of settler colonies on Palestinian land, the lacing of the West Bank with a matrix of checkpointsand Israeli-only roads, the imprisonment of Palestinian children by Israeli military courts and the episodic bombing of the people of Gaza.

Instead of responding to the concerns of those who are horrified by this behavior, defenders of Israel are promoting the notion that what is manifesting itself here is a new form of anti-Semitism, one which pretends to challenge the State of Israel for its behavior toward Palestinians but which is really nothing more than a new form of Jew hatred.

In recent years, a widely promoted campaign based on this defamatory practice has taken the form of the International Holocaust Remembrance Alliance (IHRA) “working definition” of anti-Semitism, which is being aggressively promoted by Israel as well as Zionist organizations around the world. Because it is neither particularly clear nor comprehensive, at first glance there appears to be no reason to take exception to this definition, aside from its vagueness.

“Anti-Semitism,” the definition asserts, “is a certain perception of Jews, which may be expressed as hatred toward Jews. Rhetorical and physical manifestations of anti-Semitism are directed toward Jewish or non-Jewish individuals and/or their property, toward Jewish community institutions and religious facilities.”

The definition has been contested by scholars of anti-Semitism because it conflates criticism of the Israeli government with anti-Semitism, obstructs the rights of those who campaign for the rights of Palestinians, and is so vague that it fails as a definition. Even one of the original drafters, Kenneth S. Stern, has opposed the use of the definition because right-wing Jewish groups have weaponized it to suppress free speech.

Independent Jewish Voices Canada, an organization I helped establish, comprises people who have come together in defense of Palestinian rights. We are opposed to all forms of racism. We advocate for justice and peace for both Israelis and Palestinians.

In pursuit of these priorities, we have mounted a national #NoIHRA campaign in opposition to the adoption of the IHRA definition. With our members and allies across the country, we are working to educate people about the dangers of adopting the IHRA definition.

Importantly, we are putting forward our own working definition of anti-Semitism – one that doesn’t treat anti-Semitism as a unique form of bigotry, but rather aims to draw links with discrimination against other marginalized groups (such as Muslims, Black people or the LGBT community, among others).

Meanwhile, the Centre for Israel and Jewish Affairs (CIJA), the premier Zionist organization in Canada, is actively promoting the adoption of the IHRA definition by governments, universities and other institutions across the country. CIJA and others present the adoption of the definition as a matter of basic decency, pretending that it merely enables members of the community to come together against the scourge of anti-Semitism.

In using this approach, they bank on the naivete of their targets, who are largely unaware of the pitfalls inherent in an approach that focuses on defending Israel against criticism. Fortunately, however, when people learn what the definition is really about, they seem to lose their enthusiasm for it.

Two recent cases give us reason for optimism. In Vancouver, proponents of the definition brought it to the city council in hopes of having it adopted there.

When some of our allies learned of this, they alerted members of the Palestine solidarity community.

In the following weeks, our members and allies in Vancouver were able to contact council members about the perils of adopting the definition. In addition, we mounted a public campaign asking people who shared our concerns to write to council members raising these concerns and requesting that the IHRA definition be rejected.

When the issue was presented to a public meeting of the Vancouver council, we and our allies put forward a simple alternative for the council members to consider: reject the IHRA definition and opt instead to pursue a more comprehensive approach that would help the city deal with all forms of racism, including anti-Semitism.

In the end, the council referred the matter to its committee addressing racial and ethno-cultural equity with instructions to provide recommendations to the council on how the city could “increase action to combat all forms of racism and hatred, including anti-Semitism.”

Although the IHRA definition was retained in the language sent to the committee, we and our allies are maintaining a watching brief to ensure that no part of it is adopted when the committee reports back to the Vancouver council with its recommendations.

After Vancouver, another attempt was made to have the IHRA definition adopted by the city of Calgary. Here, again, our members and allies alerted us and together we mounted a successful campaign to prevent mention of the IHRA definition in the main part of a resolution approved by the council.

Curiously, though, a reference to the definition was retained in the introductory section of the resolution. Although that reference carries no weight, it needlessly reduces the moral power of an otherwise commendable motion endorsing the establishment of an annual Holocaust Education Day in the city.

While we are heartened by the turn of events in Vancouver and Calgary, the battle is far from over.

In December, a member of the Ontario legislature introduced a private member’s bill calling for the IHRA definition to be adopted in that province. The bill has already passed its first reading.

Clearly, we have our work cut out for us. But we are encouraged by the fact that our members and allies understand the gravity of this matter. They have enthusiastically answered the call to mobilize.

As a result, we have collectively enjoyed some major successes in defending freedom of speech with regard to the Palestinian cause.