Canada follows Trump-led U.S. with new sanctions against Russia in its own ‘Magnitsky Act’

The Canadian Parliament has approved a ‘Magnitsky Act’ for Canada. Bill S-226 increases existing threats against the Russian people and government, specifically increasing sanctions against certain leaders of the Russian government.

Bill S-226 was approved unanimously on October 4, 2017. Two hundred and seventy seven members of Parliament voted in favour. Several dozen MPs were not present for the vote, including eight members from the New Democratic Party. But no MP has voiced any opposition to the bill, which has taken some months to wind its way through the House of Commons.

Passage of the bill is another stage in the longstanding, unanimous consensus of MPs with Canada’s aggressive foreign policy towards Ukraine. That includes Canada’s support to the violent overthrow in February 2014 of Ukraine’s elected president, Victor Yanukovych, and the ongoing intervention of some 200 Canadian soldiers in the country where they operate under the guise of ‘training’ the Ukrainian armed forces.

Bill S-226 is described by the Canadian Parliament as “An Act to provide for the taking of restrictive measures in respect of foreign nationals responsible for gross violations of internationally recognized human rights and to make related amendments to the Special Economic Measures Act and the Immigration and Refugee Protection Act.”

The conservative, mainstream Globe and Mail daily published a factual article on October 5 reporting on the bill’s adoption. But elsewhere, a columnist at the daily National Post, John Ivison, published an editorial rant urging adoption of the bill. He opened his article with, “Russia’s preferred style of government down the centuries has blithely been called despotism, tempered by assassination. But Canadian MPs hope that Vladimir Putin’s absolutism can be moderated by less dramatic means — international human rights pressure.”

Ivison writers further, “Putin’s visceral reaction to the Magnitsky legislation stems from an understanding that his power comes from the connivance of ordinary Russians. They are prepared to discount his excesses, if he makes them prosperous or ‘great’.”

The New York Times published a positively McCarthyite account of the legislation, focusing on the lobbying efforts of Russian-Canadians who sought to convince MPs not to adopt the law. The Times portrays the Russian Congress of Canada as a “pro-Russia group” partaking in “Moscow-backed interference in the West”.  The Toronto Star, Canada’s largest-circulation daily, reported on the new law by reprinting five of the most provocative paragraphs in the Times account. The aforementioned Globe and Mail article called the RCC “a Russian group in Canada”.

Canada is full of citizens from other parts of the world who retain close family and cultural ties to their home countries (or the countries of their family ancestors). It is not uncommon for people to speak out or lobby on behalf of the perceived interests of their ancestral homelands. The most renowned example of this in Canada concerns Israel, followed closely by Ukraine. Each of those governments as well as nationals loyal to them maintain very aggressive lobbies in Canada , including in the hallways and offices of the Parliament of Canada. In the era of Russia-truthing (the demonization of all things Russian), this commonplace becomes sinister when Russian-Canadians are involved.

The tragedy of this whole story is that is built upon a fiction. The namesake of the legislation, Sergei Magnitsky, died in a Russian prison in 2009 following his arrest under accusations of financial crimes. He was the accountant of a U.S. financier, Bill Browder, who invested in Russia during the wild years of the 1990s when many state enterprises of the former Soviet Union were provatized. In 2006, Browder was barred from future entry to Russia and investigations began into the operations of his investment firm, Hermitage Capital. Magnitsky was arrested as part of those investigations. The investigation into Magnitsky’s death in 2009 concluded that prison officials failed to provide prompt medical assistance when he became stricken. The prison officials involved were fired or otherwise sanctioned as a result. 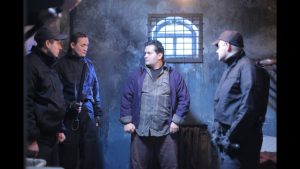 Image from 2016 film ‘The Magnitsky Act, Behind The Scenes’

Magnitsky’s story is told in a 2016 film by Russian director Andrei Nekrasov. He set out to make a film in favour of Bill Browder’s interpretation of events, namely, that Browder and Sergei Magnitsky were victims of human rights abuses and crimes. But the more Nekrasov probed, the more he came to different conclusions. His film has received next to no screenings in the West.

The back story of The Magnitsky Act: Behind the Scenes is told by Robert Parry of Consortium News, here (July 2017).

Bill Browder is given the hero’s treatment by Canada’s state-run broadcaster, the CBC, in a nine-minute interview broadcast on October 7. The CBC host describes Bill Browder as a “world renowned investor”. He punctuates Browder’s explanation of events with comments like “incredible” and “yes”, and calls the new Canadian legislation “a thorn in Putin’s side”. Browder tells the interview that Vladimir Putin is “the richest man in the world”.

Russia-gate has jumped the shark with laughable new claims about a tiny number of “Russia-linked” social media ads, but the U.S. mainstream media is determined to keep a straight face.

Russiagate is more fiction than fact, by Aaron Maté, The Nation, Oct 6, 2017

The rise of the new McCarthyism, by Robert Parry, Consortium News, September 26, 2017