Last Tuesday, there was a bizarre incident in the streets of Kiev. Ukrainian security forces had descended on an apartment building with the intent of arresting Mikheil Saakashvili on charges of having taken money with the intent of destabilizing Ukraine. 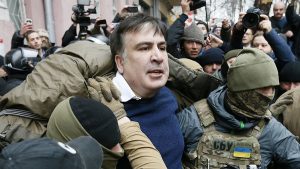 Rather than submit quietly to authorities, Saakashvili took to the roof of his eight-storey apartment block and threatened to jump. Eventually, the police were able to forcibly bundle the defiant Saakashvili into a van, but by that time thousands of protestors had arrived to block the street.

After an hour-long violent standoff between riot police and Saakashvili’s supporters, the prisoner was released from the van and herded through the crowd.

Not content with simply having secured his temporary freedom, this chap Saakashvili then proceeded to lead the crowd to the Ukraine parliament buildings where he gave an impassioned speech. He called Ukrainian President Petro Poroshenko a “traitor to Ukraine” and accused him of being “the head of an organized crime ring”.

As for the police trying to arrest him, Saakashvili denounced this as the Kiev regime “trying to get rid of a loud voice telling them they are thieves.”

The crazy part about all of this is that Saakashvili is the former president of neighbouring Georgia, and a former close friend and ally of Poroshenko. The allegations levelled by Saakashvili against Poroshenko are not some Russian media ‘fake news’ story, but rather insight from someone who was, until recently, part of the Kiev regime’s inner circle.

Educated in the U.S., Saakashvili was America’s strongest ally in the Caucasus when he ruled Georgia from 2003 until 2013. He was elected on an anti-corruption platform, but his popularity waned as his methods became increasingly authoritarian.

Saakashvili’s failed military operation against the breakaway territory of South Ossetia in 2008 resulted in Russian intervention and a huge setback for the Georgian armed forces.

By the time he lost the 2013 parliamentary elections, Saakashvili was himself facing charges of corruption.

Opportunity for resurrection soon knocked when unrest unfolded with the December 2013 Maidan Square protests in Kiev. With the United States’ blessing, Saakashvili became an ardent supporter of the anti-Russian movement, which eventually ousted Ukrainian President Viktor Yanukovych in February 2014.

In 2015, Poroshenko rewarded Saakashvili by appointing him as the governor of Odessa. To assume the post, Saakashvili had to become a Ukrainian citizen, which in turn meant renouncing his Georgian citizenship as his home country does not allow dual citizenship.

It was a bit of a no-brainer choice for Saakashvili, as any return to Georgia will see him arrested on the outstanding corruption charges. However, by the end of 2016, Saakashvili made a bold statement by resigning his post as governor. He publicly blamed Poroshenko for the continued corruption in Ukraine and threatened to create his own opposition political party.

While Saakashvili was back in the U.S. earlier this year, Poroshenko returned Saakashvili’s favour by simply issuing a presidential decree revoking the ex-governor’s Ukrainian citizenship.

Despite now being publicly stateless, Saakashvili made a grand — albeit illegal — re-entry into Ukraine this past September with the help of a crowd of supporters.

Canada has played a role in the Ukraine crisis from the outset when Foreign Affairs Minister John Baird marched arm in arm with protestors in Maidan Square. Since February 2014, we have sunk millions of dollars into not only initiatives aimed at democratic reforms, but also military training of the Ukraine military forces used to prop up this Kiev regime.

At present, Liberal Foreign Affairs Minister Chrystia Freeland, herself being of Ukrainian descent, continues to offer Canada’s 100 per cent carte blanche support to the government of Ukraine.

While Freeland purports to support the people of Ukraine, it must be noted that Poroshenko presently has just a two per cent approval rating; allowing for a margin of error, this equates to zero. Then there is Saakashvili, who is presenting himself as his adopted country’s anti-corruption saviour, while unable to return to his own country where he is himself wanted for corruption.

And somehow this is all Russian President Putin’s fault?