Canada bars Russia from meeting about weapons of mass destruction

The following story was reported in New Cold War.org on May 23. Now a news story on the subject has appeared in the main daily newspaper of Ottawa.–New Cold War.org editors 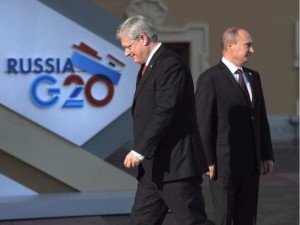 Russia has promised to retaliate for Canada’s “hostile actions” after a Russian delegation was blocked from attending an international conference in Ottawa this week aimed at stopping the spread of weapons of mass destruction.

The Conservative government was not immediately commenting on its decision to bar the two Russian officials, which Russia’s foreign affairs ministry described as “an openly unfriendly move that contradicts the normal practice of multilateral events.”

But it represents the latest salvo in the ongoing war of words between Canada and Russia, which has seen relations between the two countries plummet to levels not seen since the Cold War.

The Proliferation Security Initiative (PSI) was established in May 2003 in response to growing concerns about the spread of nuclear, biological and chemical weapons. A key part of it is an annual conference where officials from 21 countries gather to discuss latest trends and efforts to combat WMD proliferation.
Advertisement

A press release issued by the U.S. Embassy in advance of the three-day meeting in Ottawa, which started Tuesday, highlights the initiative’s “global co-operative effort” in fighting the spread of large-scale weapons.

“The PSI promotes co-operation by the states best-positioned to act based on their national capacities, using a wide array of military, diplomatic and law-enforcement tools,” it adds.

The Russian delegation was to be composed of two diplomats who work in the Russian foreign ministry’s non-proliferation and arms control section, according to the Russian Embassy. However, Canadian officials refused to issue them visas to visit Canada for the conference.

In its own press release, the Russian foreign ministry said it was “regrettable” that Canada “has acted contrary to common sense” and unilaterally blocking a country from an international event “that happens to be held on its territory.”

“We would like to remind the international community that Russia, being a key partner in the fight against the proliferation of weapons of mass destruction and a full member of the PSI, is not seeking any favours from Canada.”

The Russians went on to accuse the Conservative government of “fanning anti-Russian hysterics for domestic political considerations,” and said that the government’s “narrow-minded manner” was “inappropriate and counterproductive.

“We will be sure to provide a response to these hostile actions,” the Russians warned.

University of Ottawa international relations expert Roland Paris said it would be important to find out if there were any specific reasons the Russian delegation was blocked from entering Canada, “but it does seem odd on its surface.

“While Canada opposes Russia’s actions in Ukraine and is right to do so, it would be counterproductive to downgrade co-operation in other areas where we have common interests with Russia, including the proliferation of WMDs,” he said.

Canada has suspended all but the most low-level discussions with Russia over the latter’s annexation of Crimea and support for pro-Russian separatists in eastern Ukraine, where fighting has killed an estimated 5,000 people since last year.

The iciness is all the more striking given that U.S. and European leaders have continued to have regular discussions with Russian President Vladimir Putin and other members of his government in an attempt to resolve the crisis.

A Russian delegation was permitted to visit Iqaluit in April for a high-level international summit on the Arctic. But the event was marked by tension as Environment Minister Leona Aglukkaq used the opportunity to scold her Russian counterpart over the Kremlin’s recent actions toward Ukraine.