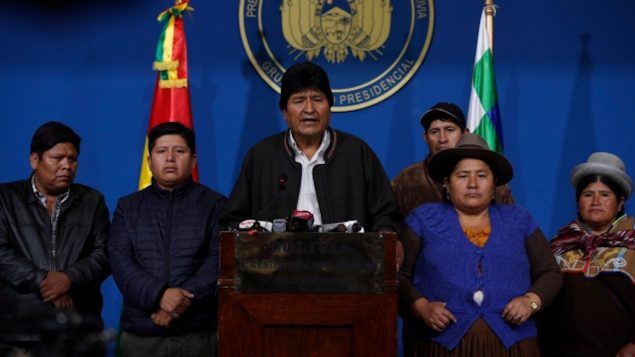 In yet another example of the Liberals saying one thing and doing another, Justin Trudeau’s government has supported the ouster of Evo Morales. The Liberals position on Bolivia’s first ever indigenous president stands in stark contrast with their backing of embattled pro-corporate presidents in the region.

In yet another example of the Liberals saying one thing and doing another, Justin Trudeau’s government has supported the ouster of Evo Morales. The Liberals position on Bolivia’s first ever indigenous president stands in stark contrast with their backing of embattled pro-corporate presidents in the region.

Hours after the military command forced Morales to resign as president of the most indigenous nation in the Americas, Chrystia Freeland endorsed the coup. Canada’s foreign affairs minister released a statement noting “Canada standswith Bolivia and the democratic will of its people. We note the resignation of President Morales and will continue to support Bolivia during this transition and the new elections.” Freeland’s statement had no hint of criticism of Morales’ ouster, who still has two months left on his 2015 election mandate. Elsewhere, leaders from Argentina to Cuba, Venezuela to Mexico, condemned Morales’ forced resignation.

Ten days ago Global Affairs Canada echoed the Trump administration’s criticism of Morales’ first round election victory. “It is not possible to accept the outcome under these circumstances,” said a Global Affairs statement. “We join our international partners in calling for a second round of elections to restore credibility in the electoral process.”

The Canadian government also financed and promoted an Organization of American States effort to discredit Bolivia’s presidential election. In a statement titled “Canada welcomes results of OAS electoral audit mission to Bolivia” Freeland noted,“Canada commends the invaluable work of the OAS audit mission in ensuring a fair and transparent process, which we supported financially and through our expertise.”

The OAS played a crucial role in bolstering right-wing anti-Morales protests after the presidential election on October 20. Morales won the first round, which no one seriously disputes. The dispute is about whether he won by a 10% margin, which is the threshold required to avoid a second-round runoff. The official result was 47.07 per cent for Morales and 36.51 per cent for US-backed candidate Carlos Mesa.

Immediately after the election the OAS cried foul. But, the Centre for Economic Policy Research’s report “What Happened in Bolivia’s 2019 Vote Count? The Role of the OAS Electoral Observation Mission” challenges the OAS claims. The CEPR concludes that there is no evidence the election results were affected by fraud or irregularities.

CEPR co-director Mark Weisbrot criticized the OAS for questioning the election results without providing any evidence. “The OAS press statement of October 21 and its preliminary report on the Bolivian elections raise disturbing questions about the organization’s commitment to impartial, professional, electoral observation,” said Weisbrot. “The OAS should investigate to find out how such statements, which may have contributed to political conflict in Bolivia, were made without any evidence whatsoever.”

While backing the ouster of Morales, Trudeau has offered support for beleaguered right-wing leaders in the region. Amidst massive demonstrations against his government, the Prime Minister held a phone conversation 10 days ago with Chilean President Sebastian Pinera who has a 14% approval rating. According to the published report of the conversation, Trudeau criticized “election irregularities in Bolivia”and discussed their joint campaign to remove Venezuela’s president. A CTV story noted, “a summary from the Prime Minister’s Office of Trudeau’s phone call with Pinera made no direct mention of the ongoing turmoil in Chile, a thriving country with which Canada has negotiated a free trade agreement.”

In Haiti the only reasonJovenel Moïse remains president is because of backing of Ottawa, Washington and other members of the so-called “Core Group”. Unlike Bolivia, Haiti is not divided. Basically, everyone wants Moïse to go. Reliable polling is limited, but a poll last month found that 81% of Haitians wanted the president to leave. Many are strongly committed to that view, which is why the country’s urban areas have been largely paralyzed since early September.

TheTrudeau governmentis obviously following the Trump administration in backing the removal of Morales. But, there has also been conflict between Canadian capital and the Morales government. Executives of Canadian mining companies have criticized Morales andexpressed fear over “resource nationalism” in the region more generally. In 2012 weeks of protest against South American Silver’s operations in central Bolivia — that saw an indigenous activist killed— prompted the Morales government to nationalize the Vancouver-based company’s mine. Ottawa immediately went to bat for South American Silver. Ed Fast’s spokesman Rudy Husny told the Vancouver Sun the trade minister instructed Canadian officials to “intensify their engagement with the Bolivian government in order to protect and defend Canadian interests and seek a productive resolution of this matter.”

Once again our government has prioritized the interests of Canadian corporations over the interest of indigenous people. Shame on Trudeau for supporting the ouster of Evo Morales.