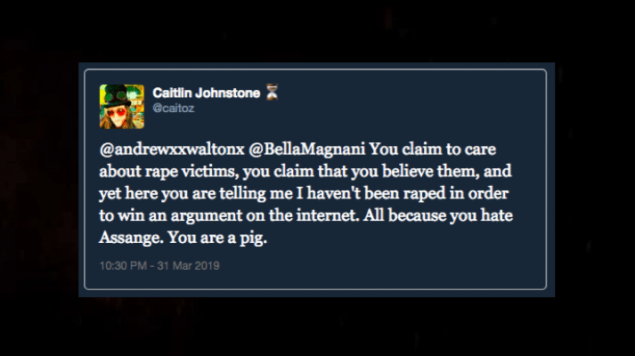 This is pretty embarrassing to write about, partly because it involves a sensitive personal issue and partly because I know I screwed up and fell into a trap. But I think the information is important enough to put out there, just to make readers aware of the tricks and tactics of pro-establishment online manipulators. I think a big part of my job here is simply to push against the walls of our cage as hard as I can, and then document the pushback that this generates from the protectors of the cage. I just have to write it out and keep moving.

Before I go on, I’d like to say that I really don’t need any lectures about this from anyone. I don’t need to be told what I should have done differently; I know what I should have done differently. I also don’t need to be told to toughen up and develop thick skin; telling a poet she should harden herself is like telling a guitarist he should amputate his fingers. Telling politically inclined internet users that you don’t need condescending lectures about how you deal with your rape trauma is about as futile a request as anyone can make, but I’m making it anyway.

In short, what happened is that I wrote a post defending Assange, and a shady-looking account came in calling me a “rape apologist” for doing so. I told the account that I am a survivor of multiple rapes, and he called me a liar, saying I was making up my history of rape experiences in order to defend WikiLeaks on false pretenses. I went off on him, he reported me, and now my Twitter privileges are suspended for twelve hours. You can read the conversation here and here; Twitter made me delete three of the tweets in order to start the clock on my suspension, but I’ll be posting screenshots of what’s missing. 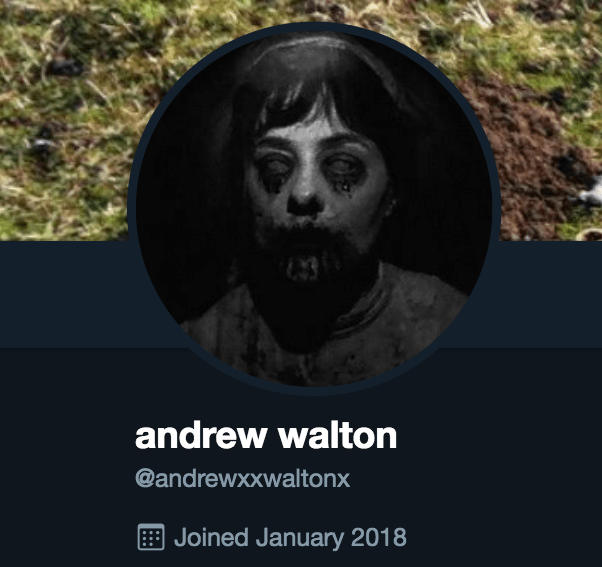 Twitter user @andrewxxwaltonx has made hundreds of posts on the site over the course of fifteen months, and during that time has gained exactly eight followers. These followers include the virulently propagandistic anti-WikiLeaks account @AssangeCritics, who interacts with this account’s posts, as well as the Palmer Report, some cat blogs, one other obsessively anti-WikiLeaks account, and a “small private intelligence firm working to combat terrorism domestic and foreign, as well as conducting counter-intelligence operations” called Black Water Security Group (no, not that Blackwater).

The other day I tweeted the following: “If you lived in anything resembling a free society, Julian Assange and Chelsea Manning would be walking around under the sun right now.” It got hundreds of shares and a couple thousand likes, which always draws the attention of the anti-WikiLeaks crowd. “Andrew Walton” jumped in a half day later, where the following exchange took place: 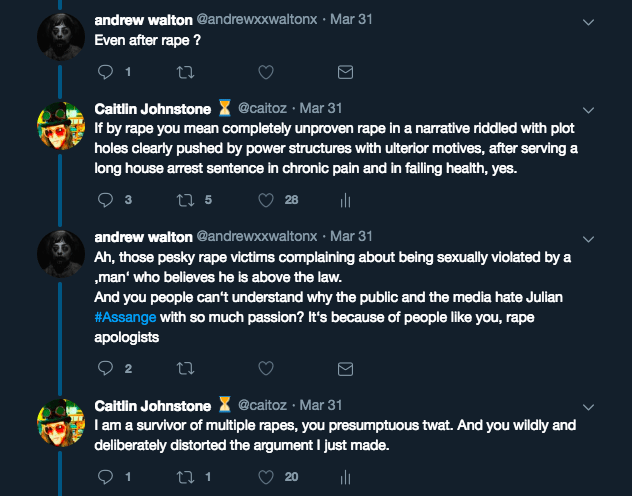 The account responded to my informing him that I’m a rape survivor by accusing me of lying. He also accused pro-WikiLeaks Twitter user @BellaMagnani (great follow, by the way) of doing the same. 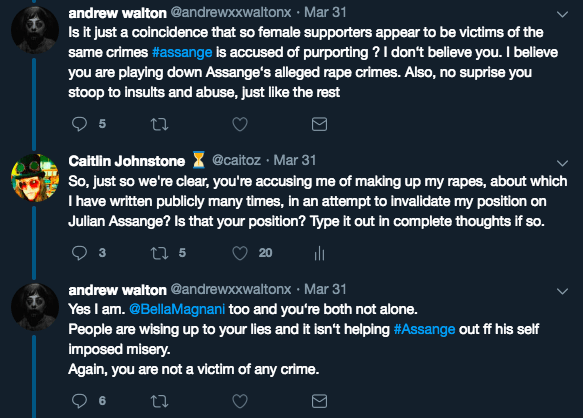 I don’t think I should have to say this, but for the record I am not lying about my rapes. I was 19 years old the first time I was raped, and the last time I was 39. I’ve written about my traumatic encounters with the business end of rape culture many times in many pieces which have never once had anything to do with defending Assange (see here, here, here, here, here, and here), and I’ve never brought it up unprovoked when criticizing the various smear campaigns that have been directed at Assange and WikiLeaks.

Anyway, I got furious at this guy and over a back-and-forth that went on far longer than it should have, I made three tweets that Twitter says violated its rules against “hateful conduct”. They read as follows:

“You claim to care about rape victims, you claim that you believe them, and yet here you are telling me I haven’t been raped in order to win an argument on the internet. All because you hate Assange. You are a pig.”

“You unquestioningly believe what’s been said about their claims, but my own story which I’ve shared many times completely unrelated to Assange you reject, in order to score a few more points for empire. You use rape as a weapon to prop up power. Probably a rapist yourself.”

“Still not sure why you’d think I’d believe you, you disgusting, rapey fuck.”

The account made other comments that were plainly designed to trigger rape trauma, like telling me“I‘ve blocked all your friends supporting you so I don‘t have to read their silly messages. It‘s just you and me,” and “I need to deal with Caitlin who appears to need help at the moment.”

And yes, it worked on me; it triggered my rape trauma. Being calmly told by him that he was deliberately isolating me so he can have me to himself to manipulate triggered something in my brain that makes me panic. I started feeling like a trapped animal. My breath got short, my heart rate went up, my cheeks went red. I know that I should’ve walked away and taken a few deep breaths and reassured my body that it was safe here in the real world. I know that now, but at the time that didn’t even occur to me as an option. I felt trapped so I acted like I was trapped and tried to fight him off instead. 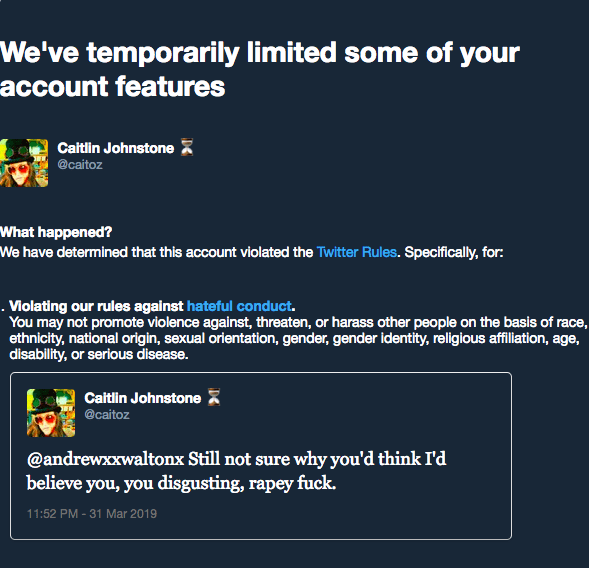 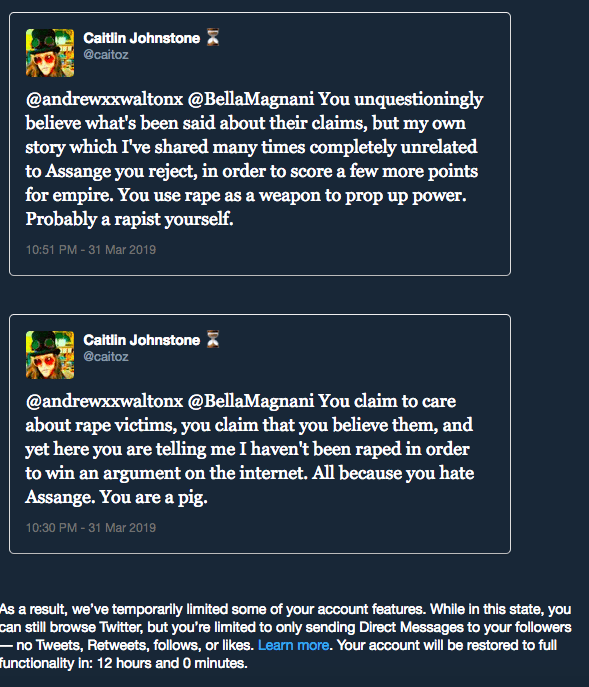 I disputed the suspension and told them I think it’s wrong that they’re siding with the guy who came out of nowhere to claim my rapes never happened, and against me for pushing back against him. 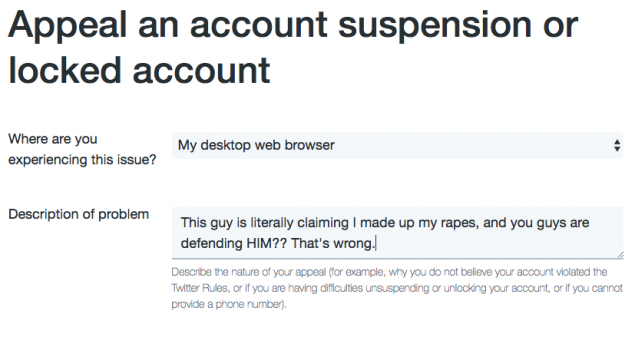 And that’s it; I’ll be back in twelve hours. From my understanding if I fuck up again I’ll be gone a week, and if I fuck up a third time my account will be permanently suspended. I have no interest in losing my Twitter platform; it’s a very useful tool for getting unauthorized ideas out into public consciousness, so I’ll be treading carefully.

All this to say that clear-eyed rebels should be careful about who you’re interacting with online and how you’re interacting with them. Use the block function liberally, and don’t be goaded into doing what they want you to do like I was. Silencing dissident voices is an important aspect of the establishment narrative control agenda, and giving them an excuse to silence you is giving them what they want.

Please feel free to share my cautionary tale if you feel so motivated, especially on Twitter since I’m locked out for the time being. Thank you.