By Dan Glazebrook and Sukant Chandan, RT.com, April 3, 2016. Part one of a series. Parts two and three below.

In the first of a four-part series, Dan Glazebrook and Sukant Chandan look at the recent spate of revelations about the involvement of British security services in facilitating the flow of fighters into Syria.

Thirteen years ago this month, in March 2003, Britain and the U.S. led an illegal and unprovoked war of aggression against Iraq, a fellow UN member state. Such a war is deemed to be, in the judgement of the Nuremberg trials that followed World War Two, “not only an international crime” but “the supreme international crime differing only from other war crimes in that it contains within itself the accumulated evil of the whole”. 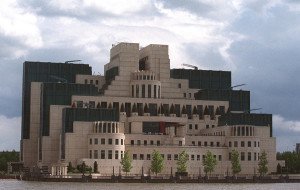 The mainstream narrative surrounding this war, and the endless catastrophes it bequeathed to Iraq, is that it was the result of a series of unfortunate ‘intelligence failures’: the British government had been led to believe that Iraq posed what Tony Blair called a “clear and present danger” to international security by intelligence that subsequently turned out to be false. Blair told us that the Iraqi government had an active nuclear weapons programme, had acquired uranium from Niger, had mobile chemical weapons factories that could evade UN weapons inspectors, and had stocks of chemical weapons able to hit British troops in Cyprus within 45 minutes.

All of these claims were false, and all were blamed on ‘intelligence failings’, creating an image of an intelligence service totally incapable of distinguishing between credible information and the deluding ravings of crackpots and fantasists such as the notorious Curveball, the source of many of the various made-up claims later repeated in such grave and reverent tones by the likes of Tony Blair and Colin Powell.

In fact, we now know that sources such as Curveball had already been written off as delusional, compulsive liars by multiple intelligence agencies long before Blair and company got their hands on their outpourings – and the British government was fully aware of this.

The truth is, there were no intelligence failings over the Iraq war. In fact, the intelligence services had been carrying out their job perfectly: on the one hand, making correct assessments of unreliable information, and on the other, providing the government with everything necessary to facilitate its war of aggression. The Iraq war, then, represented a supreme example not of intelligence failure, but intelligence success.

Fast forward to today and we are again hearing talk of ‘intelligence failings’ and the supposed incompetence of the security services to explain a debilitating Western-sponsored war in the Middle East: this time in Syria.

Earlier this year, British foreign minister Philip Hammond admitted that 800 British citizens had gone to join the anti-government terrorist movement in Syria, with at least 50 known to have been killed fighting for Al Qaeda or ISIS. The British security and intelligence community, we are to believe, were simply unable to stop them. Opportunist political opponents blame such shocking statistics on incompetence, whilst the government and its supporters increasingly weave them into an argument for greater powers and resources for the security services. Both are wrong; and a closer look at some of these so-called ‘intelligence failings’ makes this very clear.

In December 2013, it emerged that MI5 had tried to recruit Michael Adebolajo, one of the killers of fusilier Lee Rigby, just a few weeks before Rigby’s murder. Adebalajo had been on the radar of both MI5 and MI6 for over ten years. He had been under surveillance in no less than five separate MI5 investigations, including one set up specifically to watch him. He was known to have been in contact with the senior leadership of Al Qaeda in the Arab Peninsula, based in Yemen, and he had been arrested in Kenya on a speedboat on the way to Somalia with five other youths, where he was suspected of hoping to join Al Shabaab. The Kenyans were furious when they handed him over to the Brits only for him to be turned loose, presumably to continue with his recruitment activities.

In January 2014, 17 year old Aseel Muthana left his family home in Cardiff to join rebel fighters in Syria. His brother Nasser had left three months earlier, and his family was worried that Aseel would try to join him. So the family confiscated his passport and informed the police of its concerns. The police kept the family under close scrutiny. They even arrived at Aseel’s house at 5pm the day he left for Syria, to be told he hadn’t been seen since the night before. He boarded a flight at 8.35pm that night, using alternative travel documents issued by the Foreign Office. His family were horrified that he had been allowed to travel, without a passport, despite all their warnings.

A similar case occurred in In June 2015, when three sisters from Bradford travelled to Syria – it is thought to join ISIS – taking their nine young children with them. Again, the family had been under intense scrutiny from the police ever since the son went to join ISIS in Syria earlier that year. And far from being unaware of the risk of their being recruited, counter-terrorist police were apparently, it emerged, deeply complicit in their recruitment. A letter from the family’s lawyers said they were “alarmed” by the police allegedly having been actively promoting and encouraging contact with the son believed to be fighting in Syria:

“It would appear that there has been a reckless disregard as to the consequences of any such contact on the families of those whom we represent,” the lawyers said, and continued: “Plainly, by the NECTU [North East Counter Terrorism Unit] allowing this contact they have been complicit in the grooming and radicalising of the women.”

October 2014 saw the trial of Moazzam Begg, for various terrorism-related offences. Begg had admitted to training British recruits in Syria, but in his defence, he made the incendiary claim that MI5 had explicitly given him the green light for his frequent visits in a meeting they had arranged with him. MI5 admitted it was true, and the trial collapsed.

Six months later, BBC Radio 4 broadcast an interview with Aimen Dean, a founding member of Al Qaeda who was subsequently recruited by MI6 as a spy. Part of his work for MI6, he said, involved encouraging young impressionable Muslims to go and join the ranks of Al Qaeda.

Then in June 2015, Abu Muntasir, known as the godfather of British jihadis, thought to have recruited “thousands” of British Muslims to fight in Afghanistan, Kashmir, Burma, Bosnia and Chechnya, gave an interview to The Guardian, repenting for his actions. He explained that he came back from fighting in Afghanistan to “create the link and clear the paths. I came back [from war] and opened the door and the trickle turned to a flood. I inspired and recruited, I raised funds and bought weapons, not just a one-off but for 15 to 20 years. Why I have never been arrested I don’t know.”

That same month, a second trial collapsed, for much the same reasons as Begg’s. Bherlin Gildo had been arrested in October 2014 on his way from Copenhagen to Manila. He was accused of attending a terrorist training camp and receiving weapons training as well as possessing information likely to be useful to a terrorist. The Guardian reported that the prosecution “collapsed at the Old Bailey after it became clear Britain’s security and intelligence agencies would have been deeply embarrassed had a trial gone ahead”.

In January 2016, it was revealed that Siddharta Dhar travelled to Syria in September 2014 whilst on police bail for terrorism offences – the sixth time he had been arrested for terror-related offences, and not long after MI5 had tried to recruit him. Police had demanded he hand in his passport, but did not follow it up; this was despite the fact that he had revealed – live on BBC morning television no less – that he would “love to live in the Islamic State”. He later posted pictures of himself posing with guns in Raqqa. He is suspected of being the so-called ‘new Jihadi John’, appearing in an ISIS video executing suspected spies. The original ‘Jihadi John’ – British-Kuwaiti Mohammed Emwazi – had also been well known to the British security services, having – just like Adebalajo and Dhar – apparently been offered a job by MI5.

Is this all just a ‘catalogue of blunders’, more ‘intelligence failings’ on a massive scale?

These cases demonstrate a couple of irrefutable points. Firstly, the claim that the security services would have needed more power and resources to have prevented these abscondances is clearly not true. Since 1995, the Home Office has operated what it calls a ‘Warnings Index’: a list of people ‘of interest’ to any branch of government, who will then be ‘flagged up’ should they attempt to leave the country. Given that every single one of these cases was well known to the authorities, the Home Office had, for whatever reason, decided either not to put them on the Warnings Index, or to ignore their attempts to leave the country when they were duly flagged up. That is, the government decided not to use the powers already at its disposal to prevent those at the most extreme risk of joining the Syrian insurgency from doing so.

Secondly, these cases show that British intelligence and security clearly prioritise recruitment of violent so-called Islamists over disruption of their activities. The question is – what exactly are they recruiting them for?

At his trial, Bherlin Gildo’s lawyers provided detailed evidence that the British government itself had been arming and training the very groups that Gildo was being prosecuted for supporting. Indeed, Britain has been one of the most active and vocal supporters of the anti-government insurgency in Syria since its inception, support which continued undiminished even after the sectarian leadership and direction of the insurgency was privately admitted by Western intelligence agencies in 2012. Even today, with ISIS clearly the main beneficiaries of the country’s destabilization, and Al Qaeda increasingly hegemonic over the other anti-government forces, David Cameron continues to openly ally himself with the insurgency.

Is it really such a far-fetched idea that the British state, openly supporting a sectarian war against the Ba’athist government in Syria, might also be willfully facilitating the flow of British fighters to join this war? Britain’s long history of collusion with sectarian paramilitaries as a tool of foreign policy – in Ireland, Afghanistan and throughout the Gulf – certainly suggests this may be so.

Dan Glazebrook is a freelance political writer who has written for RT, Counterpunch, Z magazine, the Morning Star, the Guardian, the New Statesman, the Independent and Middle East Eye, amongst others. His first book “Divide and Ruin: The West’s Imperial Strategy in an Age of Crisis” was published by Liberation Media in October 2013. He is currently researching a book on U.S.-British use of sectarian death squads against independent states and movements from Northern Ireland and Central America in the 1970s and 80s to the Middle East and Africa today. Sukant Chandam is a political analyst and writer in Britain.