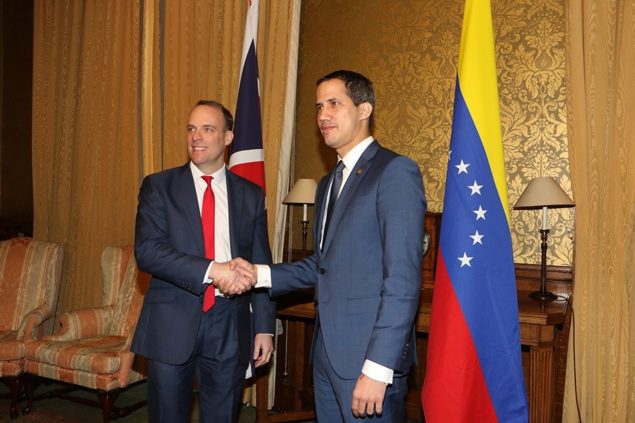 Dominic Raab met Juan Guaido in London in January where the Foreign Secretary declared the UK’s ‘support’ for him gov.co.uk

In their criminal adventures to plunder Venezuela’s gold, oil and other lucrative resources both Britain and the US are exposing themselves before the entire world as having no interest at all in supporting human rights, freedom and democracy in Venezuela. On the contrary, both Britain and the US continue to demonstrate their utter contempt towards the Venezuelan people and their right to determine their own future.

The High Court noted that the British government “unequivocally recognises” Juan Guaido as the interim President of Venezuela. Despised by the Venezuelan people, Juan Guaido, who has not even stood in a Presidential election in Venezuela let alone won such a contest, declared himself interim President of the country in January 2019 with the full backing of the US administration in Washington.

The United Nations and most countries in the world have rejected Guaido for what he really is – a tool of the Trump Administration – and instead continue to recognise Venezuela’s legitimate and democratically elected President Nicolas Maduro.

In maintaining their recognition of the Maduro government, the majority of the world is respecting the result of Venezuela’s democratic elections, in defiance of the US, Britain and a handful of allies. Britain’s decision to steal Venezuela’s gold and attempt to leverage this to politically interfere in the country is a violation of Venezuela’s right to self-determination.

Stealing and sanctions: attempts to beat the Venezuelan people into submission

Britain’s theft of Venezuela’s gold also fits directly into the wider US strategy of ‘regime change.’ Through economic warfare the US is attempting to impoverish the Venezuelan population to such an extent that they give up on resisting Washington’s attempts to overthrow their legitimate government and accept the imposition of a US-puppet President instead.

The humanitarian impact of US sanctions, however, has been severe. According to the Centre for Economic and Policy Research US sanctions on Venezuela have “killed 40,000 people… between 2017 and 2018” and caused shortages in vital supplies including food and medicine.

The US administration has seized upon the coronavirus pandemic as an opportunity to increase pressure on Venezuela through tightening the sanctions. Despite this, through a total mobilisation of its government and the whole of its society, the Venezuelan people have so far managed to prevent a major outbreak of the coronavirus and have limited the number of fatalities to 64 in total so far.

It is in this context that the Venezuelan Central Bank made its legal challenge for the Bank of England to release the $1bn worth of gold. Venezuela explicitly stated that these funds were needed to buy, through the United Nations Development Programme, vital supplies of equipment and medicine combat the pandemic. For the British government to effectively deny the Venezuelan people access to medicine during a deadly pandemic – which is the direct consequence of stealing Venezuela’s gold – is to participate in the US’ economic war on Venezuela.

Britain’s ambitions to plunder the wealth of Venezuela extend far beyond $1bn worth of gold. In May 2020 The Canary exposed the existence of a secretive “Venezuela Reconstruction Unit” in Britain’s Foreign Office. The unit was established to promote the interests of British business in the event of the US regime change agenda succeeding in Venezuela. British officials met with figures from Venezuela’s right wing opposition, including with Guaido, to discuss these “reconstruction” plans.

Venezuela is home to the biggest oil reserves in the world – a clear prize for any imperialist power that succeeds in toppling the country’s government. Prior to the election of Hugo Chavez in 1998 Venezuela was dominated by US interests that saw the overwhelming majority of oil revenues go to multinational corporations at the expense of the population which languished in poverty. Chavez’s decision to nationalise the oil industry and use its revenue to tackle poverty was intolerable for the US. It is precisely this situation that the US – with a little help from Britain – is trying to reverse.

It goes against the basic spirit of humanity for Britain to steal over £1bn worth of gold from Venezuela. These vital funds should be returned to Venezuela immediately. As Venezuela’s Central Bank is appealing the UK High Court’s decision it is important for all progressive movements in Britain to support Venezuela’s fight to recover its gold. We should also stand in solidarity with Venezuela by defending the country’s sovereignty and against the US and British governments’ relentless push for illegal ‘regime change’ and also oppose the brutal US sanctions which are an attack on human rights.