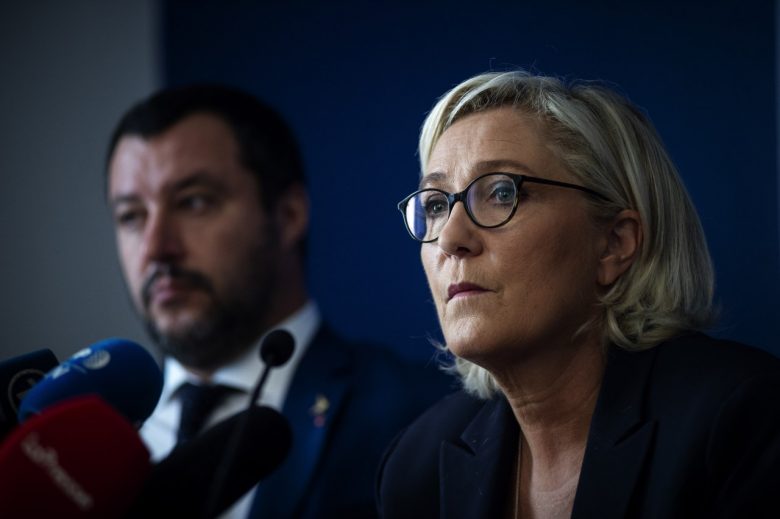 ROME, ITALY – OCTOBER 8: Marine Le Pen(R), Leader of French far-right National Rally (RN) party and Prime Minister Matteo Salvini(L) speak to the media during a meeting organized by UGL, General Union of labor, on the theme “Economic growth and social prospects in a Europe of Nations” on October 8, 2018 in Rome, Italy. (Photo by Antonio Masiello/Getty Images)

When Le Pen says “I do not see Mr. Bolsonaro as a far-right candidate. He says extreme things, unpleasant things which are insurmountable in France” and Bolsonaro described a congresswoman as “too ugly to rape”, or says that police should be given “a license to indiscriminately kill whoever they think is a criminal”, in this article Luke Barnes questions why there has been “friendly coverage” of Bolsonaro in the Wall Street Journal, which recently published an editorial endorsing the candidate.

Too fascist for the former Front National leader, but not for the Wall Street Journal.

You know your far-right platform might be a tad extreme if even Marine Le Pen is distancing herself from you.

The leader of the former Front National (which has since re-branded as Rassemblement National, or National Rally) went on French TV Thursday and was asked what she thought of Jair Bolsonaro, the former army captain who’s praised Brazil’s former military dictatorship and is now the front-runner for the country’s presidential election later this month.

“I do not see Mr. Bolsonaro as a far-right candidate,” Le Pen said. “He says extreme things, unpleasant things which are insurmountable in France.”

While Le Pen did raise the issue of Brazil’s endemic crime rate, she shied away from any sort of direct endorsement of Bolsonaro or Bolsonaro’s policies, saying she respected the sovereignty of the Brazilian people.

Brazil’s final round of election voting, which is scheduled for October 28, is the most contentious the country has seen in decades for two reasons. First, there is growing fury at the governing establishment for its corruption, a grueling recession which left nearly 14 million unemployed, and the aforementioned rampant crime rate.

Second, there is a genuine fear of Bolsonaro’s outright fascist rhetoric. He’s described a congresswoman as too ugly to rape, said police should be given a license to indiscriminately kill whoever they think is a criminal, vowed to let miners do whatever they want to the Amazon, and most recently described his electoral rival Fernando Haddad with a homophobic slur.

There’s also been a surge in violence by Bolsonaro supporters. On Sunday, a Brazilian journalist covering the election was threatened with rape and told that “when the commander [Bolsonaro, in a fitting tribute to the Handmaid’s Tale] wins, all the press would die.” On Monday, a capoeira instructor was stabbed to death, allegedly after arguing with a Bolsonaro supporter. And on Tuesday, a teenager allegedly had a swastika carved into her skin for wearing an anti-Bolsonaro t-shirt.

In the United States, however, Bolsonaro has been met with surprisingly friendly coverage. On Monday, the Wall Street Journal chose to endorse the violently racist, homophobic, sexist candidate in an editorial, describing the neo-fascist as someone who “often says politically incorrect things about identity politics” who will “liberate entrepreneurs from government control.”

Le Pen for her part, has been busy focusing on the European parliamentary elections in May 2019. Recently, she also tried to distance herself from Steve Bannon, who has created a foundation aimed at helping to spread far-right ideas across Europe.

“Mr. Bannon is not from any European country, he is American,” Le Pen said on Monday. “We are attached to our liberty, attached to our sovereignty and we together, the representatives of the different peoples of Europe, are the ones who will shape the political forces that aim specifically to save Europe.”