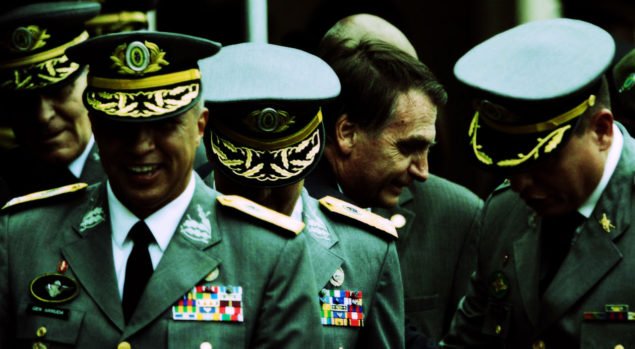 The elites made a serious mistake to bet on Bolsonaro. They’re making another mistake in thinking he can be easily sidelined.

The word is that that General Braga Netto is the new “acting president” of Brazil. Firstly, this position does not legally exist. We live in presidential system, and the power of the executive is in the hands of the President and Vice President, who are elected. Secondly, an “acting president” subverts what was left of the institutions, seals a neo-military authoritarianism in Brazil,  and consolidates the “successive approximations” method, which seems to be all that the military learn in the academy.

There was no need for a doctorate to know that the nefarious and inept Bolsonaro would have no chance of governing the country. The elites bet that he would be tutored by a strong triad composed of Guedes, Moro and Mourão (or Heleno). Everything else was unimportant and it could be left for Bolsonaro to offer positions to clowns; clowns whose only function is to entertain.

That was the plan from the beginning. It turns out that the creators of this plan forgot that Bolsonaro had been expelled from the army precisely because he was incapable of obeying rules and minimally fulfilling the functions he was given. The years as a Congressman, instead of giving him some sense of reality, served only to convince him that he was smart, canny and able to lead the country in cleaning up communism. Basically, he convinced himself that he was a new and improved Mussolini, even though he knew nothing of the Italian leader.

Nor did they understand, those who supported the overthrow of Brazil, that Guedes was known in the economic world as technically weak, and to have serious ethical problems. Moro has always been legally incapable, and could only do the damage to Brazilian institutions he has done because our judiciary has about 19 thousand judges, who are anointed to infallibility and omnipotence from a miserable public contest. They can halt the country and companies, arrest or release at their leisure, especially if they have friends and accomplices in the higher ranks. This was the role of TRF4. Moro had no technical legitimacy in Lava Jato. The operation was an example of politically orchestrated institutional violence that will be studied for years, and from it, models of containment and punishment will be developed.

There is a serious problem with the presence of a “military wing” in the government. The Army is not an institution that cultivates any trace of democracy. On the contrary, it is an authoritarian, brutal, elitist institution and – we now know – totally malformed in cognitive terms. Every General is the ripened fruit of that institution, and when a general says that “the Negro is a scoundrel” or refers to the “indolent Indian” we see that the institution was not able to teach even the minimum amount of civility to those who should be the living mirror to the institution’s work. We need to reformulate all of our army’s training or we will be suffering coups for centuries to come. The “Sorbonne line” of the present Armed Forces was removed by Bolsonaro with the fall of General Santos Cruz. Arguably he was the General with the greatest cognitive ability and social understanding of all those who infest executive power. Santos Cruz’s exit represented a lurch towards the barracks; a touch of military discipline to command the population.

Now, in a measure that was already being demanded by the media and wealthy sectors of Brazil, Bolsonaro is removed from power without pomp or circumstance. General Braga Netto – who was in charge when the black musician Evaldo dos Santos Rosa and his family were shot in Rio de Janeiro – takes over Brazil “during the crisis”. International newspapers have reported a “coup” in Brazil, while authorities from other countries have already been informed of Bolsonaro’s “protection” – and who now effectively gives the orders.

Those who think this is a solution are again making serious mistakes.

The first mistake is to believe that Mourão, Heleno and others will accept this coup and conform. The Brazilian Presidency is a very coveted asset, and with the captain out of the effective command line, appearing like a “Queen of England”, we will see the same hatred that Costa e Silva felt for Castelo Branco in 1964 return to the country. From the outside, the army looks like a disciplined and solid institution. Inside, it is a madhouse, with gossip, betrayal, villainy, and low, dirty political disputes. The difference is that everyone dresses almost the same, and do not denounce the absurdities of which they are victims, or that they are part of.

The second mistake is to believe that the democratic process is just a mechanism for choosing who will be President. If democracy is just that, Bolsonaro can be kept as a puppet, waving to people and offending on social networks, leaving the country’s decisions to “adults”. It turns out that democracy is not merely that. There is a couplet in any democracy: representation and participation. And the first point here is key. Whoever voted for the fascist captain did so because they felt REPRESENTED by him. And this feeling is so strong that even the Army will be crushed by the fascists in a complex relationship, which has already been mapped in history. The first opposition to Hitler and Mussolini came from the German and Italian armies. Fascism overthrew the Army with the ease with which it ended the liberal and moderate right in those countries. The PSDB has ceased to exist. Fascism absorbed the electorate of Aécio, Serra and Alckmin. It will do the same with the olive green paper-mache soldiers. It’s only a matter of time.

It is also necessary to consider destabilizing elements such as the neo-Pentecostal evangelicals, and the charlatans fury for power. It will be difficult to accommodate Malafaias, Felicianos and others in their crusade for power. And even if Olavo de Carvalho suddenly “dies” (as was customary in dictatorships) there is a sense of “active participation” in Brazilian fascism that would still need to be tamed by Bolsonaro himself to solidify the regime. Without the leader, these “free radicals” cannot be contained.

Soon enough, the “captain” will be “invited to withdraw” from the government, a term well known in the barracks; armed, uniformed beasts trying to appear polished and educated enough to be accepted by wealthy elites. Bolsonaro, anointed with a controversial stabbing, will be placed into the pantheon of the homeland’s heroes, and will “fall upwards” into a new plan of power in Brazil. The point is that a sanctified fascist is even stronger, and whoever is thinking about this as a solution does not understand that they are creating an even more dangerous monster.

All of this, happening in the midst of the coronavirus pandemic, hunger and urban violence that will arise due to the global economic disorganization, and at a time when we have a perverse world leadership. In the past, powerful and wealthy countries became “benevolent leaders” seeking to protect order, life, and capitalist contracts that would allow them to maintain dominance for decades to come. It was like that with England in the 19th century and with the United States after the second world war. Now, Trump is totally unable to understand the role of the U.S. in the world and has already put himself on the road to war with Venezuela, and, in an act of modern piracy, stolen equipment and supplies destined for France, Germany and Brazil. Trump’s “America first” is real and it is a pity that Bolsonaro also saluted the American flag and put Brazil on all fours for the United States.

Now, unlike 1964, it is Bolsonaro – and not the Army – who is allied to the United States. A coup against the fascist has to take into account American opposition to it.

Stay at home. Keep yourself alive.