Brazil: The dangers of being young and Black 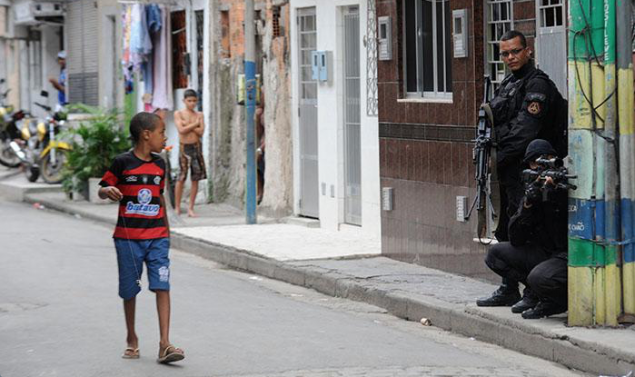 The latest statistics released by the UN show that some 23,000 young Blacks die violently every year in Brazil, equivalent to one every 23 minutes. Meanwhile, anti-Maduro propaganda constantly fingers Caracas as being a violent, dangerous place, proof that the country is run by a gang of criminals. What they don’t tell you us that many Latin American capitals are equally dangerous if not more so, an outcome of the longterm failure to provide jobs and welfare for the displaced landless who congregate in sprawling Favelas and have precious few other means to support themselves. What they don’t tell you is that the Chavistas have built literally millions of new homes and launched huge welfare and poverty-relief schemes to break out of this cycle of despair. What they don’t tell you is that economic sanctions and the attempt to starve the Venezuelan people into submission is trying to undo all these efforts and return Venezuela to the Latin American norm.

Brazil was the last country in the Americas to abolish slavery (1888). The Black and mixed-race population represents more than half of the country’s inhabitants, 55.8% of the total, according to statistics from the National Household Sample Census (PNAD), of 2018, but it is also the most vulnerable portion, earning the least and facing the most unemployment, those with the least access to education and health, with lower salaries, even when they have the same level of education as others.

Black men with higher education degrees earn on average 29% less than whites, while the difference is 27% in the case of women, according to a study by the Brazilian research institute Locomotiva.

Among the 12.8 million unemployed today in the nation, 64.3% are Black or mixed race, Prensa Latina reported citing PNAD data.

The figures also show inequality in the business world: Blacks occupy only 4.7% of executive positions and 6.5% of management positions, according to a study of the 500 largest companies in Brazil, conducted by the Ethos Institute.

The 2019 Violence Atlas, published by the Institute of Applied Economic Research, in association with the National Public Security Forum, in Brazil, 65,602 intentional violent deaths were recorded in 2017. Of these, as reported by the Forum’s journal, more than 75% of the victims were Black.

The latest statistics released by the UN show that some 23,000 young Blacks die violently every year in Brazil, equivalent to one every 23 minutes.

The study also found that young Black women are more than twice as likely to be victims of homicide as young white women.

These are figures that, according to the UN, reveal “the weight of racism in the current scenario of violence in the country.” In this sense, a Black person is much more likely to be killed compared to other citizens, regardless of age, sex, schooling, or neighborhood of residence

Black youth and adolescents in Brazil are more likely today to commit suicide than whites, PL quotes from a study by the Ministry of Health, published by the G1 news site.

From 2012 to 2016, the suicide mortality rate for the Black population increased by 12%. For every ten suicides within this age group, six were of African descent.

These figures on violence in Brazil may get worse, given the more flexible regulations governing possession of weapons decreed by President Jair Bolsonaro, since more than 70% of the homicides (47,500) were carried out with firearms.

Black youth and adolescents in Brazil are more likely today to commit suicide than whites, PL quotes from a study by the Ministry of Health, published by the G1 news portal.

The national average of homicides is 31.6 deaths per 100,000 inhabitants, much higher than a rate of 10 that is considered an “epidemic of violence” by the World Health Organization (WHO), according to ABC International.

Racial discrimination and inequality faced by the Black population, and particularly young Blacks, represent a “situation of structural discrimination, in which the rights of access to higher education, health, work, decent housing, among others, have been severely affected,” the Atlas of Violence states.

The mere presence of young Blacks in certain places frightens some, who immediately seek “help” from the police, limiting access to public recreation sites, a situation that creates great pressure on these young people and adolescents, whose opportunities for socialization are restricted as a result of discrimination and prejudice.

Police interventions in many of cases are violent, as well as unnecessary. The data is especially significant in terms of the young Black population, when it comes to police action, especially in favelas and suburbs, where they are sometimes massacred with impunity, under the pretext of a drug war.

Of the 99.5% of victims recorded as “homicides resulting from police intervention”, 79% were black and 75% young, according to data released by Amnesty International Brazil, showing the seriousness of the matter.

The violence that bleeds Brazil once again sets a historical record, hopefully, as the PT governments attempted, concrete steps will be taken to resolve such a painful situation.