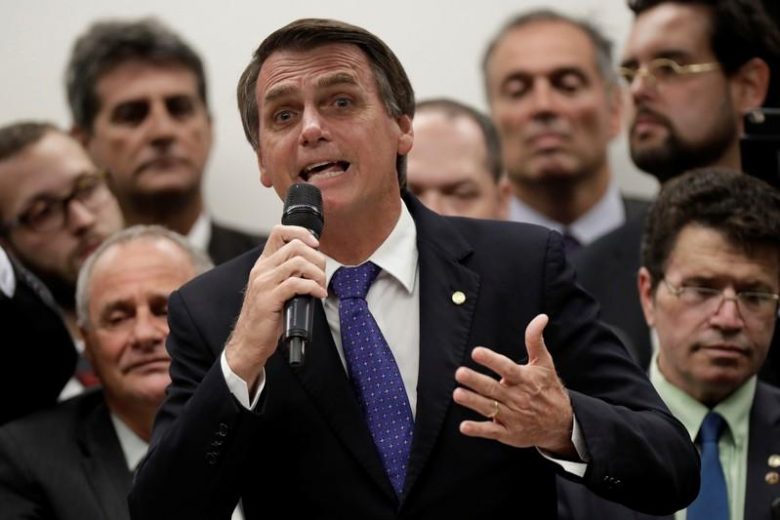 Extreme-right demagogue Jair Bolsonaro has won the Brazilian presidency. In the run-up to the election, he promised to banish ‘red outcasts’ through a ‘cleansing’ never before seen in Brazilian history. Five Brazil experts react.

The generals are back – Jan Rocha

Polls had given supporters of Fernando Haddad, the Workers’ Party candidate, hopes of a last minute upset. I saw many Haddad voters carrying a book as a symbol of his priority: education. But it was not to be. In his victory speech Bolsonaro said he would be guided by the Bible, respect the constitution and be inspired by Winston Churchill. In the streets huge crowds let off fireworks and shouted, ‘Death to the communists.’

A few days ago, he told crowds that once elected he would carry out the biggest purge in Brazil’s history: ‘We will sweep these red bandits off the map…they will be banished from our fatherland. Either they leave or they go to jail. Haddad and Lula will rot in prison.’

So his election has set alarm bells ringing. People fear that even if the new president will be somewhat constrained by the judiciary and congress, his followers will see his election as a green light to do as they please, which could mean persecution, violence and more deforestation in the Amazon. Indigenous leaders, rural workers’ leaders and the LGBTQ+ community are especially worried. Even in his victory speech, Bolsonaro found time to refer to the MST (Landless Workers’ Movement) as a ‘terrorist’ organization.

Equally worrying is his reliance, as a novice in government, on retired generals who do not have much respect for the checks and balances of civilian government. Most Brazilians are too young to remember the 21-year military dictatorship with its torture and repression. But for those that do, it is unnerving to see generals back in power.

Jan Rocha, former correspondent for the BBC World Service, is a Brazilian journalist.

The election of Jair Bolsonaro signals the collapse of the political project underpinning the 2016 coup d’état against President Dilma Rousseff; at the same time, Bolsonaro’s election reinforces the success of the economic strategy of the coup. The coup was successful because of the intensity and speed of the neoliberal reforms it delivered. The government has dismantled the oil chain built by, and around, the state company Petrobras, denationalised Brazil’s vast petroleum reserves in the South Atlantic, imposed a neoliberal labour law, introduced a constitutional amendment freezing public spending for 20 years and rolled back Brazil’s embryonic welfare state.

Yet these successes came together with political failure: the two main parties that overthrew Rousseff, PSDB (Brazilian Social Democracy Party) and MDB (Brazilian Democratic Movement, the party that deposed Rousseff), were incinerated in the elections; their destruction fertilised the ground for the rise of a former military officer expelled for disloyalty (Bolsonaro attempted to blow up army bases and pin the blame on the Left), a nullity as Federal Deputy, and a man whose stupidity, instability and florid antics make Donald Trump seem like a model of sagacity, mental equilibrium and political wisdom.

Bolsonaro has neither the administrative experience nor the political capacity to negotiate with 30 political parties in Congress, nor the ability to tame a judicial system that has become a rule unto itself and that frequently clashes against the executive and the legislature. Bolsonaro has little credibility to bring the country together after five years of deepening divisions. Quite the contrary; throughout his career, he has thrived on social conflict and a discourse of violence. It is unlikely that Bolsonaro’s administration can achieve economic success or deliver political stability. The most likely scenario is one of continuing strife, social disintegration and a succession of political impasses. Brazil will confront challenging years ahead.

Alfredo Saad-Filho is professor of political economy at SOAS, London.

For those interested in knowing a bit about Brazil’s likely future president, his latest speech, with English subtitles pic.twitter.com/ssb1hgT4rA

The idea that history repeats itself is as clichéd as it is inaccurate. But, as someone who studies Brazilian history, particularly the era of military dictatorship, I feel like I’ve been witnessing my research come to life.

Fourteen years ago, when I first stepped foot in Brazil, Lula was in the earliest years of his first term and there was a sense of hope in the air. But as the years went on I noticed more and more that the country was being engulfed by forces similar to those that raged just before the coup in 1964. Religious conservatism, anti-communist sentiment, open contempt for the poor and an emphasis on ‘law and order’ came to dominate. And, in some cases, figures from Brazil’s two decades of military rule were re-emerging as ‘heroes’, not in spite of but because of the violence they had inflicted upon the Brazilian people.

Yesterday more than half of the Brazilian electorate chose someone who repeatedly praised those decades of unbridled sadism. Now, just as then, at home and abroad, vultures dressed in designer suits eagerly await the delivery of the nation’s vital resources. With the onslaught of privatization already underfoot thanks to a coup that removed Dilma Rousseff from office in 2016 and a cadre of military generals lining up to fill Bolsonaro’s cabinet, a new form of state terror awaits Brazil, particularly its most vulnerable populations.

What began as concern has turned into an intense form of sadness and fear. But if history has taught me anything, it’s that there will most certainly be a fight. Brazilians must find it within themselves to challenge the forces of greed and hatred that never truly went away and uproot them for good. They have my unwavering support.

Uncertain times lie ahead for minorities and the most vulnerable members of society.

Bolsonaro has stated that he will criminalise social movements such as the MTST (Homeless Workers’ Movement) and the MST (Homeless Peasants’ Movement), and stop (or even revoke) the demarcation of indigenous and former slave communities’ lands. He plans to merge the Ministries of Agriculture and the Environment and withdraw from the Paris climate change accords.

Bolsonaro will have to negotiate with 30 parties in Congress, most of whom only exist to obtain political funding and power f he is to have a successful government. However, he should not have problems establishing a coalition, as the new Congress is politically and religiously more conservative, pro-agribusiness and pro-gun, like him. But his ability to negotiate is untested. Bolsonaro also counts on the support of large numbers of the armed forces and the police said they will have a prominent role in his government.

But we should not forget that Michel Temer, who replaced the impeached Dilma Rousseff, has laid the groundwork for Bolsonaro’s ambitions by imposing a 20-year freeze on social expenditure, deregulating labour laws, curtailing the power of the unions and reducing the strength of workers fighting for their rights through the labour courts system.

Mariana Noviello is a Brazilian writer and translator.

During the same weekend that a hateful attack on a Jewish synagogue took place in North America, a fascist has won the presidential election in the biggest country of South America. Often, the reaction to events such as this tends to be: ‘Let’s keep calm and start organizing some kind of resistance.’ I’m afraid that’s not enough. Not this time.

On the one hand, when I last visited Brazil earlier this year, I noticed how members of the communities more likely to be hit the hardest by the ‘God and the Constitution’ commitments of former Captain Bolsonaro and his ilk were getting ready for self-defence. When I visited the favela of Maré in Rio de Janeiro last May, up to two Casa das Mulheres were being set up: these educational and gathering spaces would also double up as safe spaces for women active in the community. The new governor of Rio, also an ex-military man like Bolsonaro, has made no qualms about his intention to push for further militarization of favelas like Maré.

On the other hand, the message one gets from the white, rich classes is, ‘Brazil will be fine. People are fed up with leftist corruption.’ The problem is rightwingers like Bolsonaro are not concerned by corruption but by ‘contamination’. They vow to cleanse society from its alleged contaminants. Mariella Franco, a leftist councillor from Maré, was assassinated earlier this year; the first of many acts of violence perpetrated and justified against the backdrop painted by Mr. Bolsonaro and his powerful backers. You can bet more will take place.

I fear for the LGTBQ+ community of Casa 1 in São Paulo, for the Amazonian indigenous, and the rest of the Left that Bolsonaro has promised to ‘purge’. Bolsonaro’s election reflects the successful import of US-style rightwing politics. Others will imitate his success. It’s time to panic and get ready for self-defence.

Oscar Guardiola-Rivera is Reader in Law at Birkbeck, University of London. He is author of  ‘What if Latin America Ruled the World?’