Brazil at the end of its Temer?

By Michael Roberts (Marxist economist in the UK), published on his blog, May 20, 2017  (with extensive graphs at original weblink, and more news below) 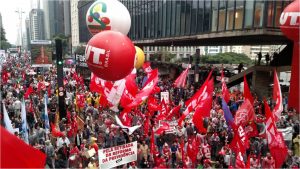 Mass demonstration in Sao Paulo, Brazil on May 21, 2017 demands ‘Temer out’, ‘Elections now’ and ‘The people decide’ (Twitter)

The news that Brazil’s right-wing President Temer has been caught trying to bribe politicians to keep quiet about corruption allegations increases the likelihood that he will be impeached by Brazil’s Congress this year.  Temer is already the most unpopular president in Brazil’s democratic history.  He only got into office by organising a ‘constitutional coup’ that ousted elected centre-left President Dilma Rousseff on the grounds of so-called ‘budgetary violations’.  An alliance of parties in favour of pro-capitalist measures to cut wages, social benefits and pensions took over Congress to back Temer.  Brazil’s stock markets and currency boomed and international capital returned to invest.

But now all these ‘reforms’ in the interests of profitability are in jeopardy.  Even though the neo-liberal policies adopted by the previous Workers Party presidents Lula and Dilma led to a loss of support among Brazil’s working class and their eventual demise, the Temer-led alliance has never commanded majority support and the latest scandal could see its end. 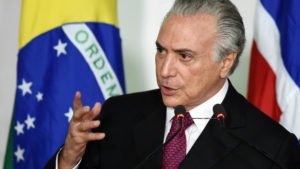 Where this will leave Brazilian economy and its people is difficult to judge – I look to my Brazilian readers to explain.  But here I can add that the Temer administration’s aim has been clear: to drive up the low profitability of Brazilian industry and capital by reducing the share going to labour; destroying trade union and other opposition trends; and turning to foreign capital for support.

The big reason that the Dilma government fell was the economy.  After the collapse of commodity prices from about 2011, Brazil’s economy dived into a delayed but deep slump.  And it is still in this economic recession.

But Temer and Brazilian capital, after ousting Dilma, were hoping that a general recovery in the world economy would spread to Brazil.  Things would turn around and enable them to cement their rule.  And there have been some signs of such a recovery.  Brazilian business has shown signs of more confidence.

Read the full article, with extensive graphs, at the original weblink above.

Related readings:
Brazil seized by corruption allegations against President, by Stephanie Nolen, The Globe and Mail, May 20, 2017

RIO DE JANEIRO — Brazil’s top prosecutor has charged the President of the country with being a member of a criminal organization – just one of the jaw-dropping developments on Friday as the country’s political crisis metastasized swiftly.

The Supreme Court released the full contents of plea-bargain testimony from a pair of billionaire meat-baron brothers, whose decision to turn state’s witness has created the most tumultuous moment in Brazil’s modern political history…

‘Out Temer’ and ‘Elections now!’ sounded in wave of protests across Brazil, Telesur, May 21, 2017

Brazil President Michel Temer suffered a setback in trying to fend off allegations of corruption and cover-up after the country’s influential bar association voted in favor of his impeachment.
The council of Brazil’s Order of Lawyers, or OAB by its Brazilian acronym, voted 25 to 1 in favor of an impeachment hearing for Temer. It will file its request in the lower house of Congress in coming days, it said early on Sunday. The OAB says Temer failed to denounce criminal activities, broke with presidential decorum, and promised undue favors to individuals…

One year on, Temer’s Brazil becomes neoliberal disaster, TeleSur, May 13, 2017