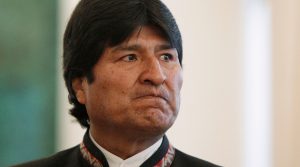 Bolivian President Evo Morales has slammed the U.S. as a “threat to multilateralism, international law, the UN,” and condemned the latest round of sanctions against Russia.

“With these types of sanctions, the U.S.A can be described as a threat to multilateralism, international law, and the United Nations,” another tweet said.

It comes a couple of days after the U.S. Senate adopted yet another round of sanctions, aimed at Russia, North Korea, and Iran. Now only the signature by U.S. President Donald Trump remains before the sanctions are finally greenlighted.

The White House has stated that President Trump is satisfied with the document and “intends to sign it” shortly.

However, not everyone is siding with Washington on the matter. A recent poll conducted at the beginning of July and commissioned by Der Spiegel showed that the overwhelming majority of Germans – 83 percent of people over 18 years old – are against the new U.S. sanctions on Russia.

The German government has also opposed the sanctions, fearing they will target the EU by extension. European companies working with Russia on various energy initiatives, such as the Nordstream II pipeline, will be targeted as well.

“It remains the case that we will not accept an extraterritorial application of these U.S. sanctions against European companies,” German Foreign Minister Sigmar Gabriel told Der Spiegel on Friday.

German Economy Minister Briggette Zypries hinted at potential counter-sanctions and a “trade war” with Washington should the document be signed by Trump.

Austria echoed Berlin in its concerns, with the president of the Austrian Federal Economic Chamber, Christoph Leitl, saying, “Europe must not let this happen,” adding that if the restrictions against Moscow are passed by Washington, “there is no doubt that Europe will be firmly united [against them].”

On Saturday, Moscow urged Washington to revise its policy and break “the vicious circle of retaliation,” Russian Deputy Foreign Minister Sergey Ryabkov said in an interview with ABC, after Moscow decided to reduce the number of U.S. diplomatic staff in Russia and suspend the use of several of the embassy’s facilities in Moscow.

German Economics Minister Brigitte Zypries on Thursday warned of the impact of new U.S. sanctions against Russia on German companies, particularly those in the energy sector and with business ties with Russia.

She told public broadcaster ARD that she thought little of sanctions decided on unilaterally, that is without prior consultation with EU partners.

Zypries warned against a trade war over this latest round of U.S. sanctions against Russia, saying such a situation would be “very bad.”

The minister added she hoped the U.S. administration had not agreed the sanctions with a view to harming Europe. “But the upshot of it all is that our companies’ interests may be harmed,” she argued.

Also on Thursday, The German Committee on East European Economic Relations said U.S. plans for tighter sanctions against Russia had the potential of harming EU firms with energy interests in their giant eastern neighbor.

It went as far as to say that the latest U.S. move appeared designed to stimulate U.S. energy exports to Europe.

The business forum added that the “possibility of European counter-sanctions against the U.S. should be kept open as a very last option,” if firms in Europe were affected.

The committee said it expected German exports to Russia to grow by 20 percent this year, up from an earlier forecast of just 10 percent, despite all the EU and U.S. sanctions in place right now over Russia’s perceived role in the Ukraine and Syria conflicts.