Bolivia: they are killing us, comrades! 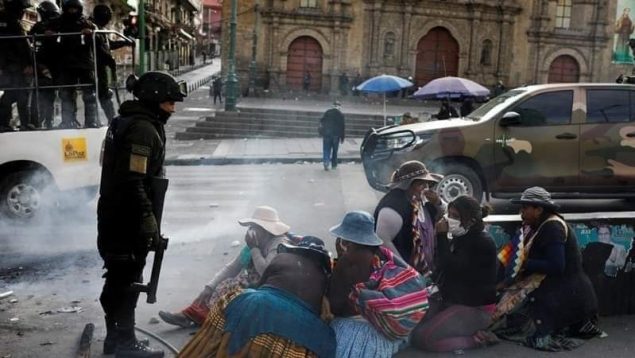 Indigenous woman have been most targeted by the racially-driven violence during this civic-military coup d’état. Photo: Redfish

In Bolivia they are not only carrying out a coup d’état, but also a fascist, chauvinist and racist massacre against a people that will not accept discipline. They are killing us…

We are receiving audios all the time, from different parts of Bolivia: Cochabamba, El Alto, Senkata, La Paz… They bring desperate cries from women, from communities that resist with dignity, under the murderous bullets of the military, police, and fascist groups armed by the oligarchies with the support of Trump, Macri, and Bolsonaro. They also bring voices that denounce, voices that analyze, voices that organize, voices that are in resistance. There are weeping voices that are remade in slogans. The united peoples will never be defeated!

The racist, fascist, patriarchal, colonial, capitalist coup d’etat seeks to put an end to all these voices, silence them, erase them, make them inaudible. The communicational fence seeks to crush and isolate the words of the people. The conservative, capitalist restoration, goes for lithium, goes for the jungle, goes for bad examples.

The voices continue to arrive. New spaces of communication are generated. The social and family networks, the community radio stations, the home videos made from cell phones are functioning by the thousands. It is heartbreaking to hear bullets. To see their journey through the flesh, invading the bodies that rise from all humiliations. It generates anger, impotence, indignation, rage.

It is not understood, then, that in the midst of this sea of rebel voices that remove the mask of murderous racism, that do not surrender, that do not sell themselves, a deafening murmur begins to sound, made up of words written from certain feminist, environmentalist spaces, that assert that it is not a coup, others that say that perhaps it is, but that in this case it is an action of the right that tries to capitalize on a popular uprising, taking advantage of the disaster provoked by Evo and his government. Criticism of the overthrown president is directed and emphasized, rather than criticism of the violent usurpers of government. Evo is equated with Camacho and Mesa, and the coup is trivialized as if it were a cockfight.

It is not the purpose of these urgent reports to discuss the machismo of Evo and so many political leaders of Our America. But we do need to say that popular feminism knows how to distinguish between the historical difficulties of the patriarchal culture of our peoples, and the imperialist and oligarchic policies that afflict us. We know how to distinguish between Salvador Allende and Pinochet, between Hugo Chávez and Guaidó, between Mel Zelaya and Micheletti, between Lula and Bolsonaro. Not to do so is to be indifferent to the feelings and struggles of women and peoples. From popular feminisms, we do not legitimize the macho gestures that sow the history of won and lost revolutions, but we discuss those gestures in the midst of the processes of change, and not with those who are killing us.

While we listen to the desperation of those who put their bodies on the streets, political statements are written on the laptops for the government that – in spite of all the errors and weaknesses that can be analyzed – has generated a plurinational experience of recognition of native peoples and their dignity. Faced with the coup d’état, with military and police participation in its definition, making the government of Evo Morales responsible for the crime, and even proposing an approach that questions the fascist, racist, patriarchal and colonial character of those who took over the government and power, is highly functional to coup interests.

When pollera women stop feeling and being threatened in the streets, when young men and women stop being criminalized and murdered, when popular movements stop being persecuted, when those responsible for these massacres are judged and the people recreate popular power from below and collectively, we will be able to analyze the limits of the experiences of the peoples leading the Abya Yala.

Today our bodies, our feelings, our forces, are focused on breaking the information blockade, on building bridges with the indigenous, peasant, feminist and popular Resistance, on agreeing with each partner and every wounded, imprisoned, threatened, persecuted, hurting partner. Those who time and time again suffered gas and bullets, blows and humiliations.

We are with the hunted and persecuted. With the humiliated. With the rebellious dignity that continues to occupy streets and block roads. And from there, we do not move. Fascism will not pass.