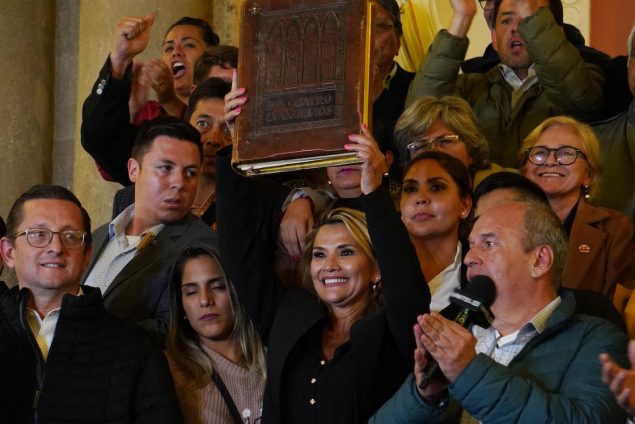 The international press reports the events in Bolivia with caution. It describes the overthrow of President Evo Morales, evokes yet another coup d’état, but fails to identify what is really happening. It does not see the emergence of a new political force, hitherto unknown in Latin America. For Thierry Meyssan, if the continent’s religious authorities do not immediately assume their responsibilities, nothing can prevent the spread of chaos. 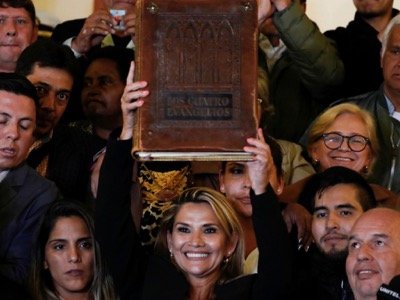 The new president of the Plurinational State of Bolivia brandishes the “Four Gospels” and denounces the “satanic rites” of the Indians. Contrary to comments in the international press, she doesn’t attack the Indians as an ethnic group, all of whom are Christians, but imposes religious fanaticism.

On October 14, 2019, President Evo Morales told a GigaVision television interview that he had recordings of the preparation of a coup by far-right figures and former military personnel if he won the presidential election [1].

However, it was not exactly a coup d’état, but a simple overthrow of the constitutional president. There is no reason to believe that the new regime will be able to stabilize the country. This is the beginning of a period of chaos.

Everywhere, there is inter-ethnic violence. The local press reports public humiliations, rapes and counts the deaths.

While it is clear that President Áñez is supported by the army, it is not clear who drove her predecessor out. It could be a local force or a transnational corporation or both. The cancellation of a mega-lithium exploitation contract could have pushed a competitor to invest in the overthrow of the president.

Only one thing is certain: the United States of America, which is pleased with the turn of events, has not provoked them, even though US citizens and officials are probably involved, as the director of the Russian SVR, Sergei Naryshkin, has indicated.

The publication of a recording of a conversation between Colombian Foreign Minister Claudia Blum and her ambassador in Washington, Francisco Santos, in a café in the US capital leaves no doubt [2]: today US Secretary of State Mike Pompeo is against any intervention in Latin America. He has already abandoned Venezuela’s self-proclaimed president Juan Guaidó, plunging anti-Maduro Colombia into disarray, and refuses any contact with the many Latin American coup apprentices.

It appears that the appointment of Elliott Abrams as US Special Representative for Venezuela was not only a bargaining chip for the closure of the Russian investigation by Prosecutor Robert Mueller [3], but also a way to put an end to the neo-conservatives in the administration. This “diplomat” behaved so badly that in a few months he destroyed any hope of US imperialist intervention in Latin America.

Moreover, the US State Department is a field of ruins: high diplomats come to testify against President Trump before the House of Representatives committee charged with dismissing him.

But if the Trump administration is not leading the way, who is? Obviously the networks installed by the CIA in the 1950s to 1970s have beautiful remnants. Forty years later, they are still alive in many Latin American countries and can act on their own with little external support.

The shadows of the past 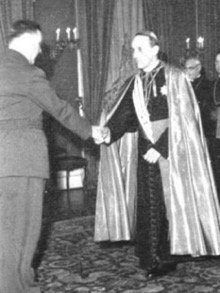 Ante Pavelić, leader of the Ustasa militia, and his protector, the Catholic Archbishop of Zagreb, Mgr. Alojzije Stepinac. The former is considered one of the worst criminals of the Second World War, the latter a Blessed One because of his fight against Titism.

When the United States decided to contain the USSR, the first director of the CIA, Allen Dulles, and his brother the Secretary of State, John Foster Dulles, exfiltrated Axis militiamen all over the world to fight against the Communist Parties. They were brought together in an association, the World Anti-Communist League (WACL) [4], which organized in Latin America the “Condor Plan” [5] aimed at organizing cooperation between pro-US regimes and at assassinating revolutionary leaders wherever they sought asylum.

Bolivian general-president Alfredo Ovando Candia (1965-70) entrusted the Nazi militiaman Klaus Barbie (the “butcher of Lyon”) with the hunt for the Argentine Che Guevara, whom he succeeded in eliminating in 1967, as he had done, in 1943 with the leader of the French Resistance, Jean Moulin. During the dictatorships of General Hugo Banzer Suárez (1971-78) and Luis García Meza Tejada (1980-81), the same Klaus Barbie, assisted by Stefano Delle Chiaie (a member of the Gladio who organized Prince Borghese’s failed coup), restructured the police and secret services.

However, after the resignation of US President Richard Nixon, the United States engaged in a major unpacking of the Church, Pike and Rockefeller commissions on the CIA’s secret activities. The world only discovered the foam of the waves, but it was already far too much. In 1977, President Jimmy Carter appointed Admiral Stansfield Turner as head of the CIA with the mission to clean up the service of its Axis collaborators and change pro-US regimes from “dictatorships” to “democracies”. Hence the question: how were Klaus Barbie and Stefano Delle Chiaie able to supervise the repression in Bolivia until August 1981?

Clearly, they had managed to organize Bolivian society in such a way that they could do without the support of the White House and the CIA. They could be satisfied with the discreet help of a few senior US officials and the money of a few multinational companies. This is probably the same way the 2019 putschists acted.

During the anti-communist period, Barbie had facilitated the installation of Croat Oustachis who had facilitated his flight from Europe. This terrorist organization, created in 1929, claimed above all a Catholic identity and had the Holy See’s support against the Soviets. During the inter-war period, it carried out many political assassinations, including the one in France of the Orthodox King Alexander I of Yugoslavia. During the Second World War, it allied itself with fascists and Nazis, while preserving its specificity. It massacred the Orthodox, but enlisted Muslims.
In total contradiction with original Christianity, it promoted a racialist vision of the world, not considering Slavs and Jews as human beings in their own right [6] The Ustashi, including their leader Ante Pavelić, fled Europe at the end of the Second World War to Argentina where they were welcomed by General Juan Perón. But some refused his policy and split. It was therefore the hardest group of people who emigrated to Bolivia [7]. 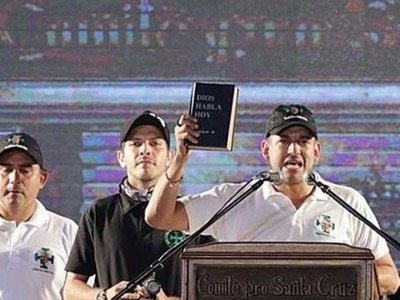 For the neo-Oustachi Luis Fernando Camacho, “Bolivia belongs to Christ! “; a truism that no one disputes in a country where 98% of the population is Christian. What is he talking about exactly?

The Ustashi in Bolivia

Whatever the ethical reasons, it is always difficult to deprive oneself of a weapon. It is therefore not surprising that the collaborators expelled from the CIA by President Carter still collaborated with Ronald Reagan’s Vice-President and former CIA Director George Bush Sr. Some of them formed the “Anti-Bolshevik Bloc of Nations” [8] mainly Ukrainians [9], Baltics [10] and Croats. All these criminals are in power today.

Concert by a neo-Ustashi group in Zagreb in 2007.

The Bolivian Ustashi have maintained links with their brothers in arms in Croatia, particularly during the 1991-95 war when they supported Franjo’s Christian Democratic Party (HDZ) Tuđman In Bolivia, they created the “Santa Cruz Youth Union”, a militia known for its ratonades and murders of Aymara Indians. One of its former leaders, lawyer and businessman Luis Fernando Camacho, is now president of the Pro Santa Cruz Civic Committee. He is the one who openly leads the nerves that drove the Aymara Evo Morales out of the country.

Identically, it seems that the new Commander-in-Chief of the Army, Iván Patricio Inchausti Rioja, is of Croatian Ustasa origin. It is he who leads the repression against the Indians with carte blanche to kill from President Jeanine Áñez.

The strength of Bolivian Ustashi does not come from their numbers. They are only a small group. Yet they managed to drive out President Morales. Their strength comes from their ideology: the instrumentation of religion to justify crime. In a Christian country, no one spontaneously dares to stand in the way of people claiming to be with Christ.

All Christians who have read or heard the new president announcing the return of the Bible or the Four Gospels to the government – she does not seem to make the difference between the two books – and denouncing “the satanic rites of the Indians” have been shocked. All believed that she came from some kind of sect. No, she’s a fervent Catholic.

For several years now, we have been warning against supporters at the Pentagon of the Rumsfeld/Cebrowski strategy who wish to do in the Caribbean Basin what they have done in the broader Middle East. Technically, their plan came up against the lack of a Latin force comparable to the Muslim Brotherhood and al-Qaeda. All the manipulations were the traditional opposition of “liberal capitalists” against “21st century socialists”. Not anymore, I don’t. From now on, a political current within Catholicism advocates violence in the name of God. It makes chaos possible. Latino Catholics are in the same situation as Arab Sunnis: they must urgently condemn these people or be caught up in their violence.