On 21 May the commander in chief of the armed forces, General Sergio Orellano, went to the National Legislative Assembly dressed in battle uniform with a list of demands and gave the legislators one week to comply or they would take unspecified measures.

In Bolivia, the considerable gains achieved in terms of poverty reduction and building institutional and economic capacity and sovereignty during the presidency of Evo Morales dissipated within a few short months following his resignation at the insistence of the head of the armed forces, Williams Kaliman. The nominal head of the junta that subsequently assumed power (Jeanine Añez), sworn in in a ceremony presided over by Kaliman in absolute violation of all constitutional requirements and norms, was previously a senator in the national assembly, member of a political party that received less than 10% of the vote in the previous election (Unidad Demócrata – Democratic Unity). The interim ‘government’ of usurpers has indefinitely postponed elections that were to be held in April and is ruling arbitrarily by brute force. 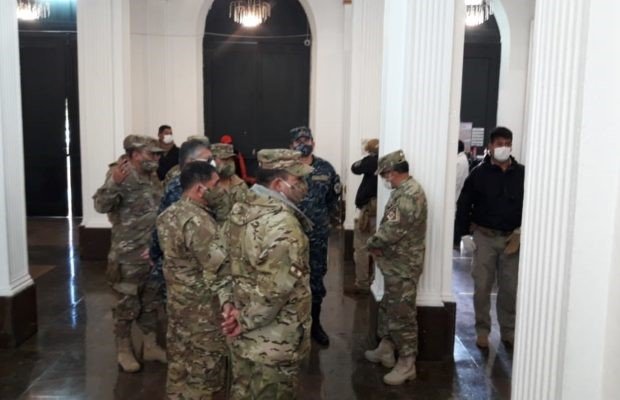 At least six of the principal military collaborators in the coup were graduates of the School of the Americas. Similarly several of the commanders of the police forces, whose actions also directly enabled and subsequently actively supported the coup, had previously participated in the police exchange program APALA with their counterparts from the US. Kaliman, one of the former School of the Americas students, resigned within days of the coup d’état and immediately moved to the United States, reportedly after receiving one million dollars for his services from an official at the US Embassy (see “Bolivia. El golpista Kaliman se fue a los Estados Unidos con un millón de dolares”, Resumen Latinoamericano, 17 November 2019, and “Bolivia. Cúpula golpista recibió entrenamiento en la Escuela de las Américas”, Resumen Latinoamericano, 21 November 2019).

The ‘transitional’ coup regime and the Armed Forces continue to demonstrate absolute disregard for the Constitution and the rule of law. There is still no mention of scheduling the national elections which were to have taken place in April, and on 21 May the commander in chief of the armed forces, General Sergio Orellano, went to the National Legislative Assembly dressed in battle uniform with a list of demands and gave the legislators one week to comply or they would take unspecified measures.

The Commander in Chief was accompanied by other members of the high command of the Bolivian Armed Forces, who proceeded to threaten to disregard the authority of the Plurinational Assembly if it does not approve the annual promotions of generals of the military institution.

“We are going to wait until next week for the Assembly to ratify the promotions of the Armed Forces. If we receive a negative response, we will proceed as established by our regulations”, General Sergio Orellana said…

The president of the Bolivian Senate, Eva Copa, denounced the incursion of the military commanders to the Assembly. The Senate, in which the Movimiento al Socialismo (MAS) party has a majority, emphasized that it will not submit to pressure from either the military institution or the de facto government.

The following day the president of the Episcopal conference in Bolivia made several remarks condemning the attitude of the de facto government and calling on its members to act in accordance with their status as a temporary measure rather than seeking to usurp all State functions, powers and resources and entrench themselves in power indefinitely. He also called on the press to hold the de facto government accountable for their actions.

The announcement is particularly important given the influence of the Church in Bolivia, and in Latin America more generally. It also indicates a sharp change of opinion, as the Church hierarchy didn’t oppose the coup. Moreover, the de facto rulers have repeatedly made extravagant gestures and remarks claiming to be returning the Bible to the presidential palace after over a decade of Pagan (or even Satanist) rule, reflecting a not uncommon attitude among Bolivia’s traditional ruling classes towards the country’s original inhabitants.

In a homily for the Day of the Journalist, the President of the Episcopal Conference of Bolivia, Msgr. Ricardo Centellas, questioned various acts of the de facto government. The remarks were made by the Bishop during the celebration of a mass in the cathedral of the city of Potosí, where he resides. He demanded explanations from the government and asked the journalists to investigate and not be silent. The remarks and questions posed by Bishop Centellas included declarations that:

“For me there is no neutral journalism, journalism that has ethics is on the side of truth, not of corruption, not of lies. Reality is reality. We cannot overlook the fact that in Bolivia the current government is issuing a transgenic decree on the production of genetically modified foods and we must find out what is the truth behind this decree…

A narco jet recently appeared. What is the truth behind this drug trafficking action?

We Bolivians have to know if this government is interested in life. From speech, from word they tell us, life comes first, but beyond that, they do not act accordingly. Really, how many reagents were bought (for treatments), where are they?

They have announced that they have provided 500 beds for intensive care. Where are they? Journalism has to help us show – there they are. Up until now we do not know what is happening, we cannot live on intentions, intentions are not the truth, the truth is the facts and there is the journalist…

The government cannot remain silent. It has to explain what is happening…

We continue in a pandemic for almost two months, but the reality for Bolivia is very harsh, not only in Potosí, throughout Bolivia there are many people who are really suffering from hunger. We must praise and thank the many signs of solidarity, but the solidarity shown by simple people, the people of the town is insufficient. It is very good, but much more is necessary…

There must be structurally clear solutions so that no Bolivian goes hungry.

And you dear brother journalists are the channels to show this reality.”