Introductory note by New Cold War.org, Jan 13, 2016: The following news article and commentary from late 2015 is posted for readers’ information. Readers can judge the author’s various claims:
* were it not for corruption among Ukraine’s economic elite and an apparently intractable political paralysis, well-intentioned “reformers” in the post-2014 coup government in Ukraine could be accomplishing great things for the country,
* the Kyiv government’s allies in Washington, Brussels and Berlin are “pressuring” the government to eliminate corruption,
* etc.


Who needs Vladimir Putin to knock Ukraine off its post-revolutionary path? The nation’s current rulers are managing by themselves. 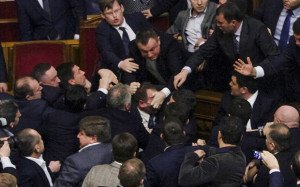 While the Russian president’s new focus on Syria has helped soothe the conflict in eastern Ukraine, offering a window for reform and recovery from a recession, the administration in Kiev is being overrun by internal squabbles. This month’s fist fight in parliament and an expletive-filled clash between a minister and a regional governor [see references below] underline discord that’s threatening to sink the government and derail a $17.5 billion International Monetary Fund rescue. The next flash point will be a vote on the 2016 budget.

With memories of the failed Orange Revolution still fresh, Ukraine risks letting internal disputes hijack the second attempt in a decade to break free from its communist past. Reformers [sic] are clashing with the vested interests that control swaths of the economy, a target of the protesters who dislodged the country’s pro-Russian leader [sic] in 2014 demanding European-style transparency. Dangers to the IMF bailout and billions more in aid from ally nations are reflected in surging bond yields.

“Judging by recent events, Ukraine is edging ever closer to committing political suicide,” said Joerg Forbrig, senior program director at the German Marshall Fund of the U.S. in Berlin. “Infighting in Kiev benefits no one more than Moscow. If Ukraine’s commitment to change weakens, infighting erupts, and the rapprochement with the West stalls, Moscow has effectively achieved its objective.”

President Petro Poroshenko and Prime Minister Arseniy Yatsenyuk, backed by the U.S. and Europe, are under pressure for failing to deliver on promises to tame corruption and reduce the sway of oligarchs. Transparency International ranks Ukraine 142nd-worst of 175 countries for graft perceptions, while the World Bank said in October that Ukraine has a “long way to go.”

Frustration is boiling over. A Dec. 11 speech in parliament by Yatsenyuk was interrupted when a lawmaker from Poroshenko’s party who wants the premier replaced sparked a mass brawl. Days later, ex-Georgian President Mikheil Saakashvili, now Odessa region governor, used a meeting on reform to accuse Interior Minister Arsen Avakov and other government members of graft. As they hurled abuse at each other, Poroshenko sat with his head in his hands.

Rifts within the ruling coalition that won a landslide in elections last year are also holding up next year’s budget, delaying disbursements of almost $5 billion in international aid as the economy struggles to recover from 18 months of contraction.

The IMF said Friday that parliament must pass a budget that meets its deficit target of 3.7 percent of economic output, as proposed by the government, or the bailout would be interrupted. Ukraine “urgently” needs to meet its IMF commitments to avoid delays in international support, U.S. Treasury Secretary Jacob J. Lew told Yatsenyuk late Tuesday by phone.

Yatsenyuk said Wednesday that his government had “agreed on all issues” regarding the budget with lawmakers, though he accused some deputies of not realizing “their responsibility to the country.”

Some may oppose calls for more fervent anti-corruption efforts and interference from the IMF, which wants tighter budgetary controls, according to Viktor Szabo, a money manager at Aberdeen Asset Management Plc in London.

“The key risk is that some senior politicians are happy to blow up the budget in an effort to keep the IMF out and prevent the anti-corruption push,” said Szabo, who helps oversee $12 billion of developing-nation debt. “If the IMF deal breaks down, you have another negative confidence shock, and you’ll see no growth next year.”

The tensions are spilling into debt markets. The yield on Ukraine’s dollar-denominated bond due 2019 has jumped by more than a percentage point to 10.112 percent since the notes were first traded a month ago, eroding optimism after a restructuring. Central bank Governor Valeriya Gontareva said last week that political strains were a factor in policy makers keeping the benchmark interest rate at 22 percent.

The Saakashvili-Avakov spat prompted Ukraine’s leaders to reaffirm their unity and quash talk of a new premier. In a joint statement, Poroshenko, Yatsenyuk and parliament Speaker Volodymyr Hroisman blamed “corrupt oligarchs” for instigating an “anti-government, hysterical and anti-state campaign.” They said togetherness is needed for “successful changes” in Ukraine.

Unity is just what U.S. Vice President Joe Biden urged when he visited Kiev this month. Addressing lawmakers and the country’s rulers, he said “all of you must put aside parochial differences and make real the Revolution of Dignity,” in reference to last year’s uprising. Bilateral loans from the U.S., the EU and Japan, among others, hinge on progress toward reform. The U.S. has provided guarantees for $2 billion of bond sales by Ukraine’s government.

The latest political turbulence will blow over, according to Bank of America. “We expect parliament will pass the budget, the IMF program will continue with minor delays and the coalition will remain intact in the next six months,” strategist Vadim Khramov said in a research note.

Even if lawmakers do what’s necessary for Ukraine to receive its next slice of aid, there are still issues that promise to remain unsettling in 2016.

Former Premier Yulia Tymoshenko, whose party is part of the government, remains intent on triggering a no-confidence vote against Yatsenyuk. Samopomich, another party from the coalition, is pushing to remove Poroshenko’s top prosecutor, a frequent target for protesters in Kiev who complain he’s not pursuing graft cases. Lawmakers are also at odds with the government over a new tax code, with discussions pushed into next year.

“It’s obvious that rifts within the governing coalition are becoming a hindrance to policy making,” Eurasia Group analyst Alex Brideau said in an e-mailed note. “The likelihood Yatsenyuk stays in office means that these battles will likely intensify in early 2016.”