Why are the French so swift and the Dutch so slow and unrevealing in the MH17 investigation?

MOSCOW–On July 17, 2014, at 1620 [corrected] local time, Malaysian Airlines flight MH17 crashed in eastern Ukraine. The investigating authority, the Dutch Safety Board (DSB), reported within five days that the two black boxes, the cockpit voice recorder (CVR – lead image, left) and the flight data recorder (FDR), had been recovered. On September 9, eight weeks after the crash, the DSB issued what it called a preliminary report.

On March 24, 2015, at 1041 local time, Germanwings flight 4U9525 crashed in southeastern France. The first black box, the CVR (lead image, right), was recovered within the first 12 hours, and the contents reported to the media by investigators of the Bureau d’Enquêtes et d’Analyses pour la sécurité de l’aviation civile (BEA). The second black box, the FDR, was found on April 2. The BEA released a summary of what it contained one day later. According to French reporters, the time elapsing between the discovery of the CVR and public disclosure of its contents was less than 24 hours – “overnight we went from zero information to knowing everything”, Paris-Match has reported. 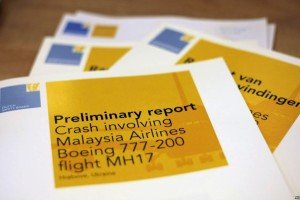 Comparing the two crash investigations, the Dutch and the French, the disclosures have been very much slower in release for the MH17 case – and almost totally unrevealing. Is this evidence about what really happened to the aircraft – or is it evidence about the forces to which the investigators have succumbed?

The cockpit evidence in the Ukrainian crash, according to the DSB, reveals the aircraft was struck by “high-energy objects”, which penetrated from outside the aircraft, and from below the cockpit floor. The impact caused the aircraft to break up and fall out of the sky in about four seconds. Repeat – that’s the four seconds between the 59th second of 13 hours 19 minutes Ukrainian time, when the MH17 crew made their last recorded radio contact with Air Traffic Control (ATC) at Dniepropetrovsk, and the 3rd second of 13 hours 20 minutes, when both the CVR and FDR recordings stopped. In between, at 13:20:00, the Ukrainian ATC operator at Dniepropetrovsk, Dnipro Control, was recorded as giving a route change clearance to MH17 but receiving no reply. The Dutch say they have come across no evidence, no sound from the cockpit, no Mayday or distress signal, no noise in those one to four seconds. The FDR is also reported by the DSB as recording all flight parameters moving normally and predictably until the recording suddenly stops. That’s NOTHING.

In truth, can the destruction of the airframe and the deaths of all 298 souls on board have occurred in four seconds, without a recorded sound of any kind?

In the Germanwings case, the BEA has already concluded from the two black-box recordings that the co-pilot locked the pilot out of the cockpit, then set a descent course with accelerating speed until the crash after 8 minutes. The BEA has identified on the CVR the sounds of the breathing of the co-pilot at the cockpit controls. Repeat – the Dutch claim they have NOTHING to show for 4 seconds. The French say they have radar plots and ground to air communications from French Air Traffic Control, plus on-board data from the black boxes for 480 seconds. That’s EVERYTHING.

The DSB report refers to “injuries to persons”, but that is misleading. Passports and nationalities have been investigated, but the report makes no mention of autopsy evidence of cause of death gathered from the bodies of the crew and passengers. “Pathological investigation” is promised by the report, but not delivered. In the French case, the bodies of the victims were reportedly pulverized on impact, and only DNA strands have been identifiable.

The Netherlands Government released the 34-page report of the DSB for public access here. In addition to the black box data, the DSB claims to have received radar plots from the Ukraine and Russia; it says it continues to investigate them. The DSB also reports reviewing “images publicly available and obtained” from the aviation authorities of Ukraine and Malaysia and the Australian Federal Police. The Dutch don’t say what these were images of, nor how they were authenticated. More NOTHING.

The DSB is also coy about identifying the sources of “satellite imagery taken in the days after the occurrence”. That means what it says. The DSB hasn’t asked for nor received US, Russian, French, British or other satellite images of the “occurrence” just before or during the period of 13:19:59 to 13:20:03. NOTHING.

The DSB identifies the other aircraft as two Boeing-777s and one Airbus A330, and gives their flight levels, but doesn’t identify their airline flights, and doesn’t report what their pilots or passengers may have heard or seen. Media reports have identified one of the eastward flights as a Singapore Airlines flight; the westward flight was Indian Airlines. Separation was less than 16 kilometres, well within normal visibility for aircraft operating in clear sky, and especially for explosions and fireballs. NOTHING.

The Dutch report gives no date for the finding of the black boxes. They are recorded as having been handed first to a Malaysian official on July 21 by “representatives of the armed group controlling the area”. The Malaysian official, accompanied by Dutch officials, then took the boxes to Kiev, and they were handed over to the Dutch Safety Board on July 22. The DSB report concludes that in the interval there was no manipulation or tampering with the boxes.

This isn’t so certain with the Dutch document. According to DSB, it was required to file its report to the “appropriate states…within 30 days after the occurrence.” That would have been August 16, a Saturday. Publication, however, was delayed.

The DSB records this delay, explaining it was caused by officials of other governments. “For the purpose of drafting the preliminary report of what is a complex investigation,” the DSB acknowledged, “the date of publication of the preliminary report was extended by approximately three weeks.” In that time seven governments, including the Dutch, had access to the draft document for “review”. The DSB identifies the others as “Malaysia, Ukraine, the Russian Federation, the United Kingdom, the United States of America, and Australia”. All reportedly “sent a reaction. The Dutch Safety Board assessed the provided suggestions and amended the report where appropriate”.

So far, without explanation, the DSB provides no transcript of any part of the 30 minutes of tape recovered and downloaded from the CVR. Instead, the report claims: “no aural warnings or alerts of aircraft system malfunctions were heard on the cockpit recording, which ended at 13:20:03 hours. Crew communication gave no indication that there was anything abnormal with the flight”.

Ukrainian ATC recordings were also analyzed, and from these the DSB report says the last recorded transmission from the cockpit of the aircraft was a 3-second response to ATC beginning at 13:19:56 and ending at 13:19:59. In short, the DSB is implying there is no evidence in the black boxes of what struck the aircraft, what the flight crew saw or heard, or how they responded when the aircraft was hit.

Aviation experts have claimed that the FDR readout from MH17 ought to show if the aircraft had a major structural failure, an engine failure, a fire, an internal explosion or was struck by cannon fire or missile. It might reveal the force and direction of any such impact. No expert has conjectured that the FDR would show NOTHING.

According to the DSB report, the FDR readings show no deviation of course from a constant heading, no deviation in speed or altitude. “Both engines were running at cruise power. All indications regarding the operation of the engines were normal. No aircraft system warnings or cautions were detected. The data stopped abruptly at 13.20:03 hrs.”

The black box evidence for MH17, reported publicly after two months, is apparently silence — at least as several governments interpret the data as “appropriate”.

The Russian Government is represented for communication with the DSB and in the international review of its report by a group of officials headed by Oleg Storchevoy, Deputy Head of the Federal Air Transport Agency (RosAviation). The group also includes Valery Luchinin, Adviser on the control of safety inspection; Andrei Krylov, Deputy Head for inspection and quality control of the Air Navigation South Branch of the State Corporation for Air Traffic Management; and Anicetas Yazokas, Head of the State Centre for Safety in Air Transport.

On July 27 Storchevoy was reported in the Russian press as saying: “There was an official request from the Dutch side to include Russian experts into the commission. The commission has just been formed… we are ready to participate in any actions deemed necessary by the commission.”

On September 9, immediately after the DSB released its report in the Netherlands, Storchevoy gave a press conference in Moscow. “We consider this publication as a preliminary report,” he said, “the first step in a long and painstaking investigation into the crash… The investigation should further study the data from the radars and post mortems of the victims. All these steps are widely regarded as a must in civil aviation and no preliminary conclusions are usually made before completing all of them. Regrettably, significant time has been wasted, and some of the data will be unavailable – I now refer to the remains of the victim’s bodies and the plane’s debris which are not secured enough and located in the zone of an armed conflict. Nevertheless, this work must be done to ensure a speedy and unbiased investigation into the cause of the crash.”

On November 21 Storchevoy told the state news agency Sputnik: “We have consistently stressed our full readiness to cooperate with the commission on any issues that emerge. However, our cooperation appears to be one-sided at the moment: they request our data, we provide it, but we get no information in return. We have not been invited to participate in joint work and, in fact, we have learned all the news from open sources.”

Storchevoy was asked this week how the text of the report which the DSB published in September differed from the draft which the DSB claims to have sent RosAviation in August. He is not answering.

According to the Netherlands Government a full DSB report will be issued in “spring 2015”.

In the investigation so far of the Germanwings crash, French government officials and BEA have not sought the permission of the Spanish or German governments before making their disclosures of the black-box data.