Bipartisan thirst for more war: 75% of Congress calls on Trump to boost intervention in Syria, to ‘pressure’ Iran and Russia 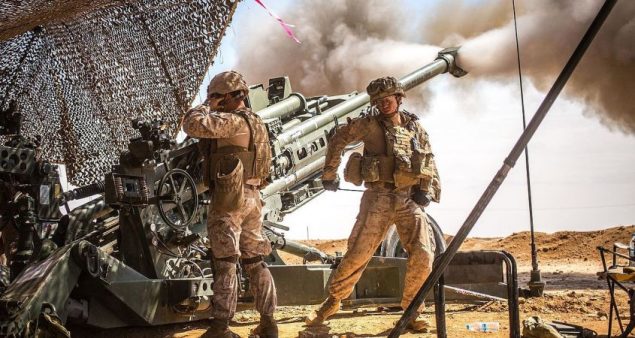 While Trump threatens Iran and Venezuela with new wars, 400 Congress members, including leaders from both parties, want to intensify the eight-year war on Syria, to weaken Iran, Russia, and Hezbollah.

While the Donald Trump administration is threatening two new wars on Iran and Venezuela, a substantial majority of the US Congress is clamoring for more immediate action.

Nearly 400 Congress members from both chambers — roughly 75 percent of all federal US lawmakers — have signed an open letter calling on President Trump to escalate the war in Syria, in the name of countering Iran, Russia, and Lebanese Hezbollah.

Top Democratic Party leaders have joined hawkish Republicans in a bipartisan demand that the far-right president “address threats in Syria” and “demonstrate American leadership in resolving the prolonged conflict.”

While the letter stops short of openly requesting more American troops inside Syria, it clearly states that the US should take more aggressive actions. It also expressly calls on the Trump White House to punish Iran, Russia, and Hezbollah with crippling sanctions.

The letter was notably not signed by Senator Bernie Sanders and Representative Tulsi Gabbard, both 2020 Democratic presidential candidates who are running left-wing, anti-war campaigns.

The Congressional call does not even feign concern for the humanitarian situation of Syrians, or make any pretense of supporting the “Syrian people.” Rather, it is entirely framed within a chauvinistic perspective of expanding American power, protecting Israel, and weakening “US adversaries.”

“The conflict in #Syria is complicated, and the potential solutions are not perfect, but our only choice is to advance policies that can stop the growing threats to U.S. interests.”@RepEliotEngel, @RepMcCaul, @SenatorRisch, & @SenatorMenendez led the bicameral effort. pic.twitter.com/yuIvOukhcn

The letter fearmongers about the presence of Iran, Russia, and Hezbollah in Syria, all of which are fighting in alliance with Syria’s internationally recognized government, which sits at the United Nations, and which has requested their support.

The bipartisan document claims that the “region has also been destabilized by Iranian regime’s threatening behavior,” adding that “Russia’s destabilizing role only complements that of Iran,” and that “Hezbollah now poses a more potent threat to Israel as well.”

Even some Democrats who have been outspoken opponents of the US-Saudi war on Yemen like Senator Chris Murphy and Representative Ted Lieu were signatories.

The letter goes on to express “deep concern” about “pockets of ungoverned space [that] have allowed terrorist groups, such as ISIS, Al-Qaeda, and their affiliates, to keep parts of Syria in their stranglehold.”

Left unacknowledged in the congressional letter is the way that US intervention in Syria in fact fueled the spread of these extremist groups. The multi-billion-dollar arm-and-equip program — the largest since the CIA’s covert war in Afghanistan in the 1980s — funneled weapons to ISIS and Syria’s al-Qaeda affiliate Jabhat al-Nusra, the biggest affiliate of the Salafi-jihadist group since 9/11.

The US Congress is often a site of bipartisan belligerence. In 2018, not a single member of the legislature opposed the Trump administration’s imposition of sanctions on Nicaragua’s leftist government.

The latest missive reflects a yearning for more war from the leadership of both major political parties, at a moment when the Trump administration is ratcheting up US aggression against numerous countries.

US sanctions on Venezuela led to the preventable deaths of some 40,000 Venezuelans in 2017 and 2018, and the Trump administration is hardly concealing its ambition to starve the Venezuelan population as a whole by threatening sanctions on the government’s CLAP food program.

The Trump administration is also increasingly threatening Iran. On May 24, Trump announced that he will be sending 1,500 troops and a dozen fighter jets to the Middle East, in a significant escalation of US aggression against Tehran.

At the same time, the Trump administration declared an “emergency” to bypass Congressional oversight and expedite the sale of billions of dollars of weapons to Saudi Arabia and the United Arab Emirates.

Representative Tulsi Gabbard, an outsider in the 2020 presidential race, has helped lead the campaign against a potential US war on Iran.

In one of many anti-war tweets, Gabbard wrote: “Cost of Iran war? A region engulfed in bloodletting, countless lives, many trillions $, our ntnl security undermined, ISIS/AQ strengthened, massive immigration crisis, likely confrontation btwn US & nuclear Russia or China. War without end because ‘victory’ will remain undefined.”

Intel officials & politicians led us into Iraq war. Now Trump’s using the same playbook to lead our country into war with Iran. The cost in lives & treasure will be infinitely greater than the wars in Iraq, Afghanistan, & Syria, and will undermine our ntnl security. #NoIranWar pic.twitter.com/BOdnJh33HE

Senator Bernie Sanders has also joined the movement against a war on Iran. He published a video on May 24 affirming, “I was right about Vietnam. I was right about Iraq. I will do everything in my power to prevent a war with Iran. I apologize to no one.”

I was right about Vietnam.

I was right about Iraq.

I will do everything in my power to prevent a war with Iran.

I apologize to no one. pic.twitter.com/Lna3oBZMKB

Ben Norton is a journalist and writer. He is a reporter for The Grayzone, and the producer of the Moderate Rebelspodcast, which he co-hosts with Max Blumenthal. His website is BenNorton.com, and he tweets at @BenjaminNorton.