By Sergey Ilchenko, Svpressa.ru, Feb. 1, 2015, translated from the original Russian by Kristina Rus and published on Fort Russ website 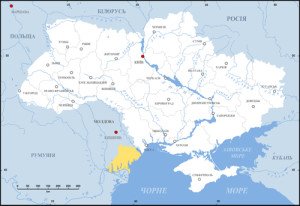 Events in the Reni district (Budjak region) of Odessa region in Ukraine are characteristic of the “fourth wave” of mobilization in the South of Ukraine. People in the old fishing village of Limanskoe have rebelled. Hundreds of residents captured an armed group of military representatives and publicly burned all the call up papers in the village square.

Reni is the extreme southwestern point of Ukraine. Located on the left Bank of the Danube, the district borders Romania and Moldova. Once upon a time, it was a major port and rail junction and agriculture and fishing farms flourished. Now, only “independent” ashes remain of the local economy. People earn a living by poaching and smuggling across the Danube. Such business forms bold and decisive characters. Every other household has a weapon, and old people tell legends about heroic robberies of Grigory Kotovsky.

Limanskoe is the former Romanian village Frikarsei. Most locals are Moldovan, Gagauz and Russian. They are openly hostile to the Ukrainian junta and completely refuse to go to war. The mood is typical, however there is one characteristic. The called-up men could easily cross the border and hide in the swamps of the Danube. But they decided to stay home and throw out the Ukrainian military.

Military Commissar of the district Igor Skrypnik knew very well about the attitude of the civilian population of the county towards mobilization. So before a trip to Limanskoe to issue mobilization orders, he requested armed security. A group of Commisar employees was reinforced with Odessa punisher-nazguardians.

That produced the opposite result: when people in camouflage with guns appeared in the village, this caused an outburst of spontaneous protest,” said acting chairman of the State Administration Sergey Barimov.

“About two hundred inhabitants of Limanskoe surrounded the representatives of the military and the guard armed with machine guns. I immediately informed the governor Igor Palitsa of the unfolding emergency in Limanskoe. I reported because I know the mentality of this village: the incident could have ended tragically!”

The head of the district is right – the commissar’s reps and the nazguardians were disarmed, the crowd was seriously going to deal with them. At the same time, the fishermen of Limanskoe put up checkpoints around the village. Across Lake Cagul, brigades from neighboring villages were rushing in on motor boats. The Romanian towns Lukavitsa and Isakcha on the right bank got on high alert.

To negotiate with the rebels, the deputy chairman of Reni administration, Ivan Stadnikov, quickly arrived. The respected leader was able to persuade his countrymen to release the “prisoners” without inflicting injuries.

What happened to the confiscated machine guns is unknown.

This was reported by the acting head of the district administration S. Barymov. He argues that the Odessa regional administration does yet intend to pursue a punitive operation in the rebellious village. A power sweep against the Danube rebels may trigger an explosion of people’s anger around the Bessarabian region. [See note below on the history of Bessasrabia.]

“When the incident was over, I was called by the head of the Ministry of Interior of Ukraine in the Odessa region and assured that the head of the Reni district police department, dispatching armed guards, made a mistake and will be punished”, shrugged the official.

That is, people were reassured by the promises that the cops are to blame for everything, and the commissar patrol will not show up in Limanskoe ever again.

Comment by translator Kristina Rus:
Looking at the map above, you can see that the Reni district is completely cut off from the rest of Odessa region (and Ukraine) and is surrounded by Romania from North and West, and the lake in South-East. Perhaps geography contributed to their bold hostility. It appears that no one from the Odessa region wants to deal with them at this point. Perhaps hoping that its isolation will not infect other districts. Do we have a Reni Republic in the works? I can bet this is what local men talk about at night. For now, looks like we have a “Limanskoye Republic” for sure. Surrounded by its own checkpoints. And triumphantly left to their own devices by the masters of Odessa region.

This is yet another argument for those analysts who think that more fragmentation of Ukraine is yet to come.

Bessarabia (Romanian: Basarabia; Russian: Бессарабия, Ukrainian: Бессарабія) is an historical region in Eastern Europe, bounded by the Dniester river on the east and the Prut river on the west. Nowadays, the bulk of Bessarabia is part of Moldova, whereas the northernmost regions, as well as the southern regions bordering the Black Sea (Budjak), are part of Ukraine. 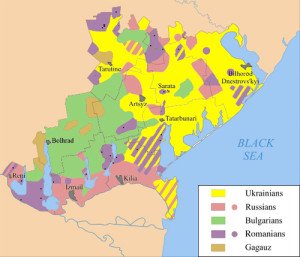 In the aftermath of the Russo-Turkish War, 1806-1812, and the ensuing Peace of Bucharest, the eastern parts of the Principality of Moldavia, an Ottoman vassal, along with some areas formerly under direct Ottoman rule, were ceded to Imperial Russia. The acquisition was among the Empire’s last territorial increments to take place in Europe (the last being Congress Poland, integrated into the Empire between 1815 and 1867). The newly acquired territories were organised as the Governorate of Bessarabia, adopting a name previously used for the southern plains, between the Dniester and the Danube rivers. Following the Crimean War, in 1856, the southern areas of Bessarabia were returned to Moldavian rule; Russian rule was restored over the whole of the region in 1878, when Romania, the result of Moldavia’s union with Wallachia, was pressured into exchanging those territories for the Dobruja.

In 1917, in the wake of the Russian Revolution, the area constituted itself as the Moldavian Democratic Republic, an autonomous republic part of a proposed federative Russian state. Bolshevik agitation in late 1917 and early 1918 resulted in the intervention of the Romanian Army, ostensibly to pacify the region. Soon after, the parliamentary assembly declared independence, and then union with the Kingdom of Romania.[1] The legality of these acts was however disputed, most prominently by the Soviet Union, which regarded the area as a territory occupied by Romania.

In 1940, after securing the assent of Nazi Germany through the Molotov-Ribbentrop Pact, the Soviet Union pressured Romania into withdrawing from Bessarabia, allowing the Red Army to occupy the region. The area was formally integrated into the Soviet Union: the core joined parts of the Moldavian ASSR to form the Moldavian SSR, while territories inhabited by Slavicmajorities in the north and the south of Bessarabia were transferred to the Ukrainian SSR. Axis-aligned Romania briefly recaptured the region in 1941, during the Nazi invasion of the Soviet Union, but lost it in 1944, as the tide of war changed. In 1947, the Soviet-Romanian border along the Prut was internationally recognised by the Paris Treaty that ended World War

During the process of the dissolution of the Soviet Union, the Moldavian and Ukrainian SSRs proclaimed their independence in 1991, becoming the modern states of Moldova and Ukraine, while preserving the existing partition of Bessarabia. Following a short war in the early 1990s, Transnistria proclaimed itself the Pridnestrovian Moldavian Republic, separate from the government of the Republic of Moldova, extending its authority also over the municipality of Bender in Bessarabia. Part of theGagauz-inhabited areas in the southern Bessarabia was organised in 1994 as an autonomous region within Moldova.